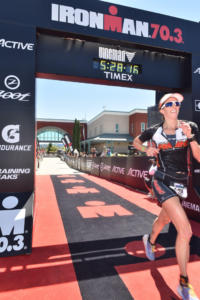 In high school, Chrissy dabbled in various sports, including running, but usually found herself invariably injured with a broken bone or other affliction. Around this same time, she also first learned of triathlon, reading an article in the now-defunct teen magazine, YM. The article profiled an 18-year-old racing Kona, and Chrissy filed away that she’d one day do a triathlon.

Fast-forward to the tender age of 25 when she was making her “before 30” bucket list and added the bullet “marathon or triathlon” to ensure she had flexibility and options. At the time, she was a leisure runner, logging 3-ish mile efforts two-to-three times a week and joining group classes at the gym after work. The following year was a particularly trying one filled with tragedy, and the gym became an outlet; Chrissy began spending a lot of time in the pool, on the treadmill and attending spin, pilates and yoga classes. It seemed like a good idea to funnel all this extra exercise towards a goal and check something off her aspirational list, so she registered for a sprint triathlon, to take place fall of 2008. While she enjoyed the run training a lot, the longer runs made her think she’d probably never be able to do a full marathon. On race day, riding a cruiser bike purchased off Craig’s List just weeks prior, Chrissy raced her first triathlon and loved it; but being the competitive soul that she is, decided to focus more on running until she could afford all the gear – ahem, a bike – that would put her in the mix with the front-of-the-packers. The month after the sprint triathlon, which was Chrissy’s first race ever, she did a 10k, followed by a half marathon the month after that and so forth and so on.

In 2011, Chrissy finally made the leap to the marathon distance, thinking that she’d try to break four hours and be a one-and-done marathoner. She far exceeded her goal, and post-race, several folks were quick to point out how close she was to Boston-qualifying. This planted a seed, and Chrissy nabbed her qualifying time in that following year (2012), and decided that is was time to return to triathlon. Ergo she registered for an Ironman the week after qualifying, and then promptly bought a bike. 2013 was her first year in triathlon, and it’s been a wildly fun journey experiencing so many courses and amazing locales and the endless goals involved.

Chrissy moved from Atlanta to the Bay Area in August of 2014. She lives in Livermore with her fiancé – also a triathlete – and their lazy greyhound, Sal, who paces her on easy brick runs and other easy “volume miles.” In the warmer months with more daylight, she likes to sneak it rides and runs on Mount Diablo before or after work.

When I first heard that the Ironman 70.3 World Championships were to be held in Chattanooga, Michael and I immediately thought we would try to qualify and make a trip home to see friends and family. The location was announced probably 18 months out from the race date,...

The Oakland Tri Fest was my first multi-sport event in California when I moved here three years ago. I raced it two weeks after moving as a way to check out the local multi-sport scene. It was fascinating in that respect and I also met two of my now-close training...

Racing Myself at Donner Lake Triathlon

The last couple of years (triathlon seasons) living in NorCal, I've really enjoyed racing Big Blue Adventure events, as they're fun with a great vibe, are set within gorgeous venues and offer a reason for a weekend in the amazing Tahoe-Truckee area. In 2015, I raced...

I'm fairly certain I'd rank Ironman 70.3 Coeur D'Alene in the Top 3 of all the 13 different 70.3 races I've completed. I think it nails the mark on: The town - such a cute and wonderful town filled with breweries, trails that are steps from downtown and an amazing BnB...

#Triatus: it’s been a while…

Not only did I take an 8+ month triatus from racing, but evidently from writing about it, too! This doesn’t mean that I haven’t been training or busy. In fact, quite a few things have happened since my last 2016 triathlon: Half marathon PR (:05 is :05, baby!) Marathon...