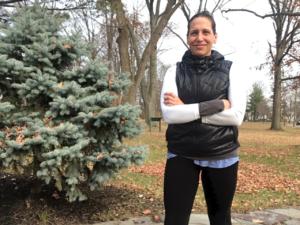 Jen grew up in Brooklyn, New York and didn’t compete in any sports until much later in life at the age of 37. She started running in 2009 after the birth of her second son, when a friend challenged her to run the NYRR Scotland Run 10k in Central Park. Running became much more than a fitness regime and quickly became a way to find a community of like minded women and a metaphor for life. Later that year she would run her first marathon in Philadelphia.

Since 2009, Jen has run 5 marathons, 2 in New York and others in Pennsylvanie, New Jersey and Maine. She has also run close to 20 half marathons on the East and West coast and countless 10ks and 5ks.

Running took a shift for Jen in 2014 when for the first time, she trained with a professional coach and learned how to approach and execute longer distances and pacing. After years of training on her own, she now runs longer distances, faster. This also lead to racing 5k’s which requires a different approach than long distance. Jen reached her first 5k PR in 2016 at the Little Silver 5k in New Jersey.

After a three year marathon retirement, Jen is currently training for the 2017 LA Marathon in March. Jen’s love for running continues to grow especially through community. She is passionate about enabling other runners and hopes to take on pacing others at local races this year.