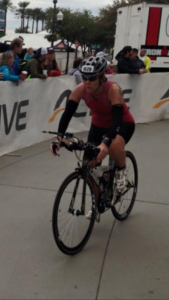 It all began with a dare! I was a young mother of two, content with running two miles, no more on the treadmill daily. In January of 2003, my husband and I went to Disney World to watch my cousin and her husband run their first marathon. I remember tearing up a little for the strangers that were crossing the finish line and then my husband looking at me and daring me to sign up for the following year. So, I did… but, dared him to as well! We finished that SLOW, HARD race together (5:12 or something like that) holding hands…the official clock had him beating me by a hundredth of a second. I vowed to myself to register the following year to run and beat my time (and if truth be told, my husband too!). The competition with myself had begun!

While training for Boston, I developed a few nagging injuries and my brother suggested I try switching things up a bit by biking and swimming. So, in true to me form, I decided, I already knew how to run, I had been swimming for AT LEAST two months… all I needed to do was learn how to ride a bike…no biggie! So, with that experience, I planned the rest of my race year: two Tri For Funs in Galt, an Olympic Distance at Nimbus, culminating in my first 70.3 in Austin, Texas with my brother. We’ve gone on to race two other 70.3’s together: Galveston and Hawaii. In addition, I’ve raced Barb’s and Vineman 70.3’s a handful of times too! In November of 2015, I completed something I said I WOULD NEVER do… I raced and finished Ironman Arizona in a little under 14 hours. There is nothing like being rained on, hailed on, but SO DETERMINED to get to that finish line so that I could hear I WAS AN IRONMAN! That is a feeling never to be forgotten.

This past brings me to my future. I am again ready to tackle a racing calendar! For 2017, I plan to focus on two races, though I know I will have other races and events mixed in between. In May, I will race Santa Rosa 70.3 and then continue the build to again tackle Ironman Arizona 2017!

•I am a transplant from the East Coast… moving to CA 9 years ago!
•I am the mother to Jonathan (18) and Lauren (16)
•I have been married to my husband, Harry, for almost 22 years! ♥
•My dog, Buster (a 2 year old rescued pit mix) may just be right up there as my favorite child at times!
•I only eat chicken and turkey for meat and therefore have gotten quite creative- thankful for Pinterest!
•I received my degree in Elementary Education and now work part time teaching.
•I am petrified of swimming in the ocean and/or anywhere snakes or alligators could be… don’t know how I grew up in Florida!