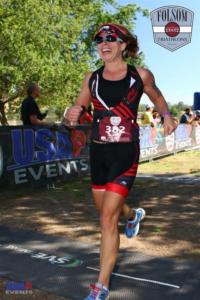 Ten years into her career as a CPA (with long hours, extensive travel and countless restaurant meals) Jill found herself 25 pounds overweight. Although she avoided sports of any kind throughout her youth, on New Year’s Eve 1999, her closest friend dared her to train for the 2000 Chicago marathon. She fell in love with running and treasured friendships developed while sharing miles along the American River Parkway. Two years later, still struggling to achieve a healthy weight despite running 30 miles a week, she focused on nutrition, traded marathons for 10Ks, found a job with less travel/stress, and discovered better health.

An injury forced Jill to stop running in 2011 so she headed to the pool for swim lessons. A few years later her favorite spin instructor (a national class cyclist) convinced her to buy a bike and patiently mentored her in the basics of road cycling. Then she gave running another try – just 5-10 miles week. With the encouragement of some Freeplay athletes she entered her first sprint triathlon and won her age group. She’s super excited to be part of Freeplay’s new Club Team in 2017.

On Mud, Love and Running

Gingerly navigating down the first of many steep, muddy slopes while trying to stay out of the way of seasoned trail runners who flew past me during TBF's Escape From Folsom 10 Miler, my goal quickly became "just avoid a trip to the ER". Those close to me know that I...