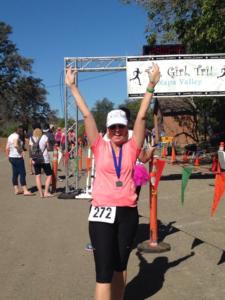 Lisa was born and raised in Corpus Christie, TX. She grew up, literally, on the beach. This inspired her love of the ocean, spending time in the water and running in the sand. Lisa continued to show her love of running all through out elementary and high school. She was on the high school cross country and track teams, meddling in distric, regional and state championship meets. Lisa took this passion to Coronado, California where she was active in Roadrunner Running club and participating in many races all over the San Diego area. Lisa competed in her first Sprint triathlon in 2000. She then competed in an Olympic distance triathlon in San Francisco in 2001, all while participating in many long distance runs all over California. Sadly, in February 2001, Lisa was hit by a car while riding her road bike. This created at 15 year hiatus from the bike. Lisa still ran, but chose to focus her time on family. Lisa married the love of her life in November 2001. In 2004, with her husband, she adopted her son, Colby. Then, after several rounds of in vitro, they had their second son, Carter.
Through many years of health ups and downs, Lisa was diagnosed with endometriosis in 2006 & asthma in 2012. She had a hysterectomy in 2010 and started asthma treatment in 2013. From this point on, Lisa has been determined to not let any of these health issues affect her passion for running, biking and swimming. Lisa purchased a new bike in early 2016 and completed a Duathlon. At 46, Lisa is making a comeback. She is excited to show her children how to be determined, tackle a goal and conquer a fear!
Lisa is starting off 2017 with the Hot Chocolate 15K in San Francisco 0n January 8, 2017.

The page you requested could not be found. Try refining your search, or use the navigation above to locate the post.