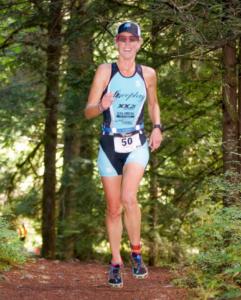 Kimberly Larson grew up in Seattle, playing soccer, skiing and scuba diving. Most of her weekends until college consisted of ski team in the winter and competitive soccer the rest of the year.

When the opportunity to go to college and play soccer in Hawaii arouse, Kim jumped at it. With a degree in broadcast journalism, Kim worked as a new producer with ABC, NBC & CBS affiliates for over 8 years. She got into triathlon while in Hawaii, more for having independent athletic goals! At the time Kim could not even swim the length of a 25-meter pool freestyle! Her first triathlon was a combination of side stroke, back stroke and breast stroke in Kaneohe Bay, she was first in her age group and decided to learn freestyle!!!

After 8 years of triathlon and Ironman racing Kim changed careers and picked up mountain biking “just for fun” and to help her recover from knee surgery. She fell in love with it, and the rush of going downhill over steep and rocky terrain. From there Kim took on the Team LUNA Chix Tahoe Mountain Bike program and really improved on her own mountain bike skills while encouraging and teaching others at the same time. Last year (2014) after a ten year break from triathlon, mainly swimming and running, Kim picked up Xterra thanks to her spouse & good friends encouragement and fell in love! She hopes to continue racing as long as her knees let her!

Highlights: - Getting my picture taking with Ironman Legend Scott Tinley - Finishing the race in one piece – both me and my bike - Seeing all my Xterra Race Friends Downsides: - The weather Lessons Learned: - Travel with mud tires (skinny ones) - Cleats on mtb shoes...

I definitely did not feel ready for Xterra Tahoe City. The weeks leading up to the race I had been on the road quite a bit for work. Add to that the temperatures in Tahoe had dropped back into the 30’s at night and I knew Lake Tahoe was going to be one cold swim! Race...

After Xterra Real in early April, the thought of waiting until the end of June to race again seemed like a long time to wait! So I decided a road trip to Southern California was in order for San Dimas Xterra Renegade. Keeping the training going was a little tough as...

First race of the season, DONE! It was also the first year I had to train thru a real winter, like actual snow on the ground, teaching skiing every weekend, its really cold outside (1 degree) winter! And what a difference a winter makes when it comes to an early...

Figuring out the Fat Bike

It’s not as easy as it looks, riding these fat bike things, especially in the snow on ungroomed trails. Getting tired of the trainer and wanting to get outside and ride I joined some friends with the Ride to Recovery group & Project HERO City of Reno on a fat bike...