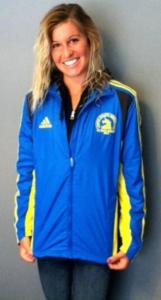 Liz grew up swimming competitively from the age of 7. She accepted an athletic scholarship to the University of Washington in 2005, and was a four year letter winner for the UW Women’s swim team. She graduated with a BS in Public Health, and decided to take up running after being a water athlete for 16-years. Liz went from a 3:09 Marathon time to a 2:55 Marathon time in 2-years. Swimming and running came naturally so Liz decided to dabble in Triathlon while working on her Masters in Kinesiology at Cal Poly SLO. She had the fastest swim split at Collegiate Nationals her first year, and won Wildflower’s Women’s Collegiate race. She met her now husband at Cal Poly’s Valentine’s day race, where they both won first overall for their gender’s. She works for St Jude Medical’s Neuromodulation team, implanting Spinal Cord Stimulators for patients with Chronic Pain. She is a passionate mother to her infant son and loves spending all her free time with him, and her Vizsla pup Pacer.

The page you requested could not be found. Try refining your search, or use the navigation above to locate the post.