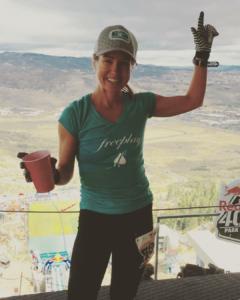 Stacey was raised in Solana Beach, CA where she started her athletic career. She first fell in love with soccer, then transitioned to field hockey in high school. Traveling to the East Coast for tournaments gave Stacey plenty of exposure, which led to joining the Junior Olympic team, then landing her a scholarship at the University of North Carolina, Chapel Hill.

Stacey had a great experience at UNC, including winning the National Championship, 3 times! After her last season, Stacey traveled to Perth,Australia for a study abroad program where she began to fall in love with road running. She continued her education (while improving her running speed) at Pepperdine University earning her Master’s in Arts. Stacey started her career in Pharmaceutical Sales shortly after. She started with road running, and then became addicted to trails, especially throughout Northern California.

Realizing the importance of core training while racing, Stacey opened The Dailey Method in Roseville, CA so that she could share her favorite cross training workout with the Sacramento area. The Dailey Method was such a huge success that, with the help of her
business partner, it expanded to 3 studios throughout the Sacramento region. She enjoyed teaching and taking classes while training for road and trail races, but then ventured into triathlon, where she committed to racing an Ironman with her husband, Adam, for his 40th Birthday (bucket list…check!). Stacey and Adam, along with their 2 boys, Ryder (6) and Elliott (4), were eager to move to the mountains…and they made it happen!

In September of 2015, Stacey started a new job as a Key Account Manager with a Pharmaceutical company in Park City where she is thrilled to explore her new outdoor “playground” with her family.