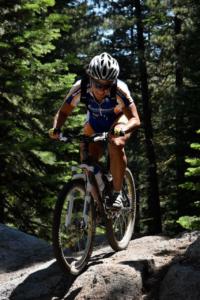 Carol Irving grew up in Southern California and ran cross country and track throughout high school. After heading to U.C. Davis, injuries forced her to change sports, and she found herself as a member of the Women’s Water Polo Team, which went on to win a National Championship.

After college, Carol enjoyed trying her hand at a variety of outdoor activities while working for REI and became an avid mountain biker.  She spent many of her days exploring the Sierras via mountain bike and was a guide for Harebrain Adventures, a mountain bike tour company. Eventually, she found the road bike during a Team in Training event and started her journey up the cycling ranks and racing as a Cat 1, specializing in criteriums.

It has been 5 years since Carol has competed in a bike race, but she has stayed active on the bike and found the joy of  Stand Up Paddle Board.  She looks  forward to an active 2017 returning to her mountain bike roots and venturing into the new world of SUP races. Currently, she resides in Benicia, CA with her boyfriend, an avid mountain biker, and her 2 dogs that are avid paddlers.