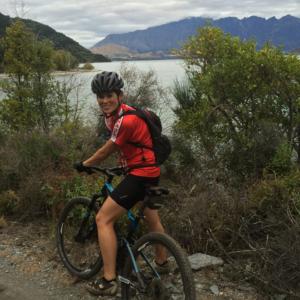 Melanie was born and raised in the heart of the Rocky Mountains (Calgary, Canada). Growing up she enjoyed a variety of sports – skiing, skating, squash and soccer. She played competitive soccer through university until a knee injury ended her soccer career. After two knee surgeries and months of rehabilitation on a spin bike and in the pool, she decided to try out a sprint triathlon. That was eight years ago and she’s never looked back.

The next summer, friends invited her to compete in Canmore’s 24-hours of Adrenaline. Up for the challenge she bought a mountain bike and realized her true passion was on the trails. Since then she has competed in a variety of mountain bike and off-road races throughout the world, including 12 and 24-hour enduro races in Canada and Australia, the Western Australia State Series, the 4-day Cape to Cape in WA, Hellfire Cup in Tasmania, Triple R in Cairns, a couple of X-Terra triathlons (New Zealand and Victoria) and the Alberta Provincial Cup Series, among many others.

Off the trails, Melanie is a professional hydrogeologist and recently completed water aid work in Tanzania. Her husband and son (2 yo) share her passion for the outdoors and are all excited to begin exploring the trails around their new home in Northern California!