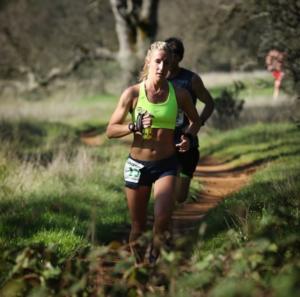 Erin Wachter grew up in Rancho Cordova with her two sisters and one brother. She started running around the age of nine after competing in gymnastics and swimming. At the age of 12 she ran in her first Junior Olympics. She went on to earn eight All-American medals between Track and Field and Cross Country. While attending high school at Cordova Senior High, she set the school record in the mile and was the first girl in school history to compete at the California State Meet for cross country. She went on to run as a hornet at Sacramento State where she was part of two Big Sky Conference Championship teams in track and placed 2nd as a team in cross country. After graduating in 2009 with a degree in Kinesiology, she joined the SRA Elite team and turned her focus to the marathon. She ran her first marathon in December of 2009 at the California International Marathon and has since run eight marathons while chasing the Olympic Trials standard. However, after a disappointing 2015 dealing with injury, she was unable to qualify for the 2016 Trials. She plans to spend the next year trying her hand at ultra-marathons while still tending to a few road races. She is optimistic that her injuries are behind her and she hopes to have a solid year of racing!

I finished off 2015 with surgery on my left wrist to remove hardware from a previous break. At my one week check up my surgeon told me he "recommends" I wait another week before running as to be safe from getting an infection or falling and re-injuring the bone....