#Triatus: it’s been a while…

Not only did I take an 8+ month triatus from racing, but evidently from writing about it, too! This doesn’t mean that I haven’t been training or busy. In fact, quite a few things have happened since my last 2016 triathlon:

Leading up to the nuptials, I was doing a pretty solid volume of training, semi-structured even. I did have a bit of wedding hangover from the lack of structure and routine the week of and even a bit immediately following, but within a week or so was back at it, aided by the awesome performances of so many friends at 70.3 Florida and 70.3 Oceanside. Always so inspiring to watch people race, and it helps get me back in the mindset.

I was most worried about coming back on the bike given the run training that I’d done in preparation for the half marathon. Perhaps some of my best yet. I had been riding with the guys a good bit throughout the winter and rejoined the group rides after only a short wedding hiatus, feeling pretty strong. Coach then had me do a “crash week” on the bike, logging 250 outdoor miles and 6.5 Kickr hours across nine days. I felt great and was really enjoying it. The only thing that started to surface was the result of the rainy season really leaving. This meant that the super bloom equated to super allergies. Windy, long rides outdoors often left me out of commission for the rest of the day or longer and didn’t help recoery sleep.

As the weather improved, and my outside time expanded to upwards of ten hours or so in a given weekend riding, running, swimming and leisure-riding; my allergies wreaked havoc. I couldn’t breathe. Ever, it seemed. Brushing my teeth was a cardio/anaerobic event. Sleep was intermittent at best. The resulting sloppy trail runs left me bruised and scabbed from tumbles. My cycling still seemed okay, strong even, but my running felt like it was really taking a hit. Intervals were a joke and a half. I was miserable and also concerned that some of my symptoms felt like an overreach for simple allergies.

I finally broke down and scheduled an appointment with an allergist, and also started a regimen of local honey. Desperate times called for desperate mesasures. The allergist diagnosed and prescribed much of the typical for what I was experiencing, but a bit stronger than the OTC remedies that I was maxing. And then the curve ball: asthma. And an inhaler; for all that wheezing, coughing, shortness of breath and tight chest. How could I underperform on a breathing test? I could only say to the allergist “but I exercise a lot.” It threw me off, but I shouldn’t have been totally surprised, as both my parents have asthma, and I specifically remember my Dad – a very active and fit individual – carrying an inhaler for as long as I can recall. It was also partially a relief and an end to a paranoid pursuit of googling things like “symptoms of Lyme disease” as I’d wondered if I’d been ineffective cleaning up after long jaunts on trails.

I had some interesting (weird?) internal battles that followed during workouts and also my first triathlon back: Folsom International. I didn’t want to be in a haze of medication so I opted not to take any pre-race but to have it for when I finished. I hadn’t done any open water swims yet on the year, so made sure to get transition set up early enough that I had ample time to swim in the water and adjust to the coldish (mid-60s) temps and murky composition.

The swim started in deep water because of debris from branches and sticks at the lake entrance. My start wave was the last and a bit large, and I started near the front from wide right (typical). The horn sounded, and I started swimming and felt pretty good. Until I didn’t. I wasn’t sure if it was the water (temps or murkiness), the aerobic effort, or my respiratory limitations, but I felt out of breath very quickly. I then started to panic, not eased by the sense of crowdedness. This was exacerbated by the goggles I’d selected, which had limited periphery and fogged up terribly.  I couldn’t see anything, and the buoys I was trying to spot were *white* versus the typical neon orange or yellow. I moved to the far right, which helped, but I ended up implementing a lot of tarzan swimming and breast stroke. Mostly as I swam through large patches of the same kind of debris as was near the shore, moving sticks and branches away from my neck and head. It felt like I was being choked by them. If there had been more kayaks or if I could see them, I might have called it a day in the water. Fortunately and unfortunatley, I have experiences like Ironman Wisconsin and Escape from Alcatraz to pull from, where I was in a crappy swim situation for much longer than 1,500 meters!

I was SO excited to be done with that swim, and just wanted to pedal and climb on my bike. I don’t think I’ve ever wanted to get on my bike so badly. I had a blast riding the rollers and the bigger, steeper climbs further out on the course. On one of these longer, steeper climbs in the last half of the bike, I rode past a young twenty-something from an early start wave and gave her kudos. She responded by confirming that there were only two more ladies ahead of me. That was exciting considering that I’d started last! I passed one more lady about five miles up the road. We then went off-roading through a gravel section before getting back to transition where I noticed that the most recent pass had caught up and was right with me.

The run was on trails, which got me super-excited to get to the run portion of the race. You can’t really be a stickler about pace on trails, so it’s all about effort, chasing people and having fun. I had a sense of urgency departing transition since the other gal looked energetic and fast. Plus, I still had one to catch! I started off feeling okay and progressively felt better as I traversed the changing terrain throughout the run: soft sand, single track, steep fire trails and everything in between. Some folks coming back the other way encouraged me that the other lady was not far ahead. I really wanted to ask: how many minutes and how old is she? If she were younger, there was a good chance that I was actually in the lead. Did I have a buffer?! I felt amazing the last mile or two and dropped some guys that I’d been running it in with, though did not catch the other female (spoiler alert: she was not younger/did not start in an earlier wave and got me by 2′). 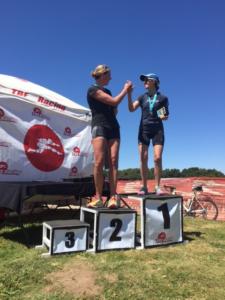 After I crossed the finish line, I immediately launched into a terrible coughing and wheezing attack. It was at this moment that I realized I’d left all my meds – inhaler included – at home. It was scarry with my obliques cramping through the violent cough fest, leaving me struggling to breathe.

I didn’t wait around too long before heading home, and my other allergy symptoms had already started to unleash. Home was not close and I wanted to be there so, so badly. I was also starving, but not about to stop for food because I didn’t want to delay my arrival home. The two-hour ride home – Saturday traffic FTW – was an emotional rollercoaster. I felt like now my issues had names and that was affecting how I thought about them. Like they were a real thing that owned me. I felt like I had this dependency now, like I was vulnerable. I hate that. I’ve always liked to feel independent and tough. This didn’t feel that way. The old me, before I knew I had a thing with a name, would have said “I feel like crap, so I’m promising myself a beer, tacos and a hot bath when I get home; until then, I’m putting on my big girl briefs and sucking it up.” This internal dialogue made me upset, mad.

Over the following days, deciding that I don’t like being dependent on things and that this affliction bothered me less when I thought I was just “feeling like crap,” I decided to forgo the meds. I felt good enough without them, but still needed to use the inhaler when I had episodes that called for it.

My run came back around over the weeks following and I started nailing my run workout targets. Some of this was the resolution that I was done feeling like crap and it was time to get it done, but it also helped that the temperatues were heating up and the allergens clearing the air. I freakin’ love the hot weather (don’t let me forget this in two months:) ), and have been spending time in the steam room at the gym to assist. This has been a good impetus for me to log a couple short bonus swims each week, post-swim steam room time!

I will say that I’ve continued to struggle on the bike. Trainer rides, and some outdoors, where I’ve had tough targets. It’s the balance of relying on the legs versus the lungs. Being what I’d consider a softer and more noodly* athlete compared to my more muscular counterparts, I’ve always relied on my lung power (cardio, cadence) to get me through tough sessions and intervals. After finding myself gasping through many a trainer workout and feeling on the brink of tears, I’ve had to learn how to lean on my legs, and that burns!

*this is not for lack of trying! I love my strength training sessions, and make a concerted effort to get a lot of daily protein by way of protein powder in smoothies, hardboiled eggs, greek yogurt, nuts and legumes, salmon. etc

It’s frustrating because my Instagram feed consists of too many ladies raving about their amazing trainer sessions and these workouts they’ve conquered to achieve their goals and how they feel so great about themselves. And how FUN it is! It’s tough to think about that during a session where you feeling like you’re dying and it’s the furthest thing from fun. My conclusion is that they’re simply not working hard enough if they’re having that much fun, ha! There have been – during and after trainer sessions – a lot of near-tears and declarations to quit triathlon altogether and other things from “the dark place.” It’s been a learning process so far this season to reconcile how I use my body (legs vs lungs and in between) to achieve the targets set forth. Should be an interesting season…