This was my first time racing with the newly implemented rolling swim start at an Ironman 70.3. I wasn’t sure what to expect but was frankly a bit worried that the course may feel crowded and physical. I seeded right behind the 35/36-minute line and jumped in the water pretty easily. Usually I get major nerves on race morning and am surly about the idea of racing. On most race mornings, I mention retirement a few times. It helped on this day that it was right on top of summer solstice, so the sun rose at 4 AM. With a 6:15 AM race start, it had been light out a bit and it felt like it was time to start exercising. With the rolling start, it look me more than 15 minutes to actually arrive at the start line and begin swimming.

I decided to try to swim the buoy line and see what would happen. I started off in similar rhythm to the swimmers next to me of both genders. As it turns out, it was nice to have swim buddies! After the first few buoys, I noticed that I started passing all the swimmers I came upon. I was hoping this meant that I was doing well. I felt like I was swimming on course, fairly straight and pretty strong. Though as I got close to the finish chute, I did have the impression that I’d been in the water for a while. Not surprisingly, I logged a 38-minute swim. Because I ALWAYS log a 38-minute swim. No matter how I feel about the swim – it was tough, I swam off course, I was nervous/anxious/scared,  I was tired, I was strong, I swam straight, I was confident – the result always seems to be the same.

You never know how folks (other competitors) are handling the day, so I’ve learned to take these initial results with a grain of salt and to simply press on. Looking back, the swim times for the top 10 girls in my age group were all very erratic. Still not sure what to make of it.

I felt like a rocket in transition, running hard and getting ready to load up with my cycling gear. This was one of the few 70.3s with wetsuit strippers, which was a nice treat!

I got out on the bike and took the first loop with an effort that was probably slightly below race effort, but it allowed me to settle in and take in some early nutrition. I noticed as I took on the climbs of the second loop – the ones I was nervous about – that they set up very much like the local climbs I ride on the regular. They were long for a 70.3 but not for where I ride, which made them feel pretty easy. One reminded me of a local climb of about five miles that I used to take in my little ring and would struggle along, but I’ve come to love and embrace it and now often ride it in my big chain ring, while in aero. I was able to take that race climb like I now do the local climb, and felt strong. Most of the climbs offered momentum into the next. For all the ascents on the bike course, it felt pretty fast. The roads were nice and smooth, too! 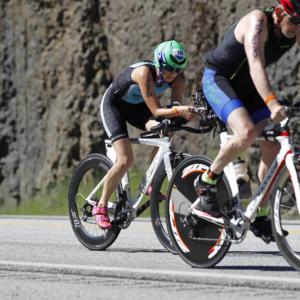 I was able to complete the bike course a bit faster than I anticipated, which was a great feeling! It was fun riding, too!

During the first few miles of the run, I was hitting my target pace. Then I encountered the first real climb on the run course and my pace faltered. As I neared the turnaround for the second loop, I could tell that it was heating up outside and that the fatigue was starting to catch up to my legs. The second loop was a struggle.

I was targeting a 5:08 finish time for the race. This was a totally flawed strategy, but it had worked for me at Oceanside 70.3 the prior year. I looked at what time would net a podium finish and then how I could hit those splits. I executed exactly as such as Oceanside. The problem at Coeur d’Alene though was that this would be a PR for me at the 70.3 distance, on a hot day and a tough course with an honest swim (and bike and run, too).

On the second loop, I could see that my pace was slipping. Early in the loop, it looked like I could hit 5:08 if I maintained my pace, but my pace had started to slip. I was now thinking that 5:10 was a best case scenario, and that would still be a PR, so I would be happy with that. As I reached mile 11 and then mile 12, I started to get ecstatic. I saw that I could still achieve 5:08! I remember how elated I was running down the main drag in town toward the finish line.

My other two goals for the race (aside from a time goal) were to podium and earn a slot to 70.3 Worlds. As it turns out, alllllll the fast girls showed up this year. The gal who had won my old AG the year prior didn’t even make it on the podium with the same finish time as prior year. My new AG was large and fast. I still made the top 10 but I was a little bummed that was all my best could get me. But it did snag me a spot to Worlds! Given that it was a large AG, we had six slots (six!) allocated, so I was able to snag one of those. I knew this new AG would be tough, but it’s even more so than I could have imagined. It’ll be an interesting stretch racing these speedy ladies!