Racing Myself at Donner Lake Triathlon

The last couple of years (triathlon seasons) living in NorCal, I’ve really enjoyed racing Big Blue Adventure events, as they’re fun with a great vibe, are set within gorgeous venues and offer a reason for a weekend in the amazing Tahoe-Truckee area. In 2015, I raced Donner Lake, and then Lake Tahoe Tri in 2016. Neither disappointed with tough and honest courses, beautiful swim settings, phenomenal bike course views and runs that are sure to test your legs and lungs. My husband and I decided to return to do the Donner Lake Olympic this year, partially because I love the idea of racing on my birthday and he was much more open to a local Olympic than an Ironman!

This was especially neat because it represented the first time I’d ever repeated a triathlon. Until this race, I’d had no barometer for year-over-year improvement aside from %s, rankings, scores, etc. In order to race my 2015 self, I would need to structure the weekend similarly. That meant doing a long ride the day prior that was a loop of the Ironman Tahoe bike course. I loved that course and it was a treat to re-ride. It seemed easier than I recalled and just as beautiful. In looking at the data, I summited Brockway four minutes faster on my pre-race ride this year than in 2015 – that’s a nice gain! This was all especially meaningful for racing on a day where you officially age up and hope to not decline with added years.

The rest of the weekend, similarly, consisted of relaxing with friends and enjoying the area. A lot more friends this time around since we’ve met so many amazing people living here! The friends we stayed with have a standing reservation at a lovely mountain house directly across the street from the race – you’d be hard pressed to find a parking spot that was closer than the house where we stayed. This made race morning easy breezy. We got in line to get into transition right when it opened and secured a prime spot for our bikes. We had assigned rows, but were otherwise able to snag the rack and spot closest to “bike out” on that row. And then returned to the house to get ready at a very leisurely pace.

I walked over with my friend Kathy about 20 minutes before our swim waves were scheduled to start, and saw my husband finishing his warm up as I waded in to get used to the water and temperature – always a prudent idea at altitude and with cold water. We’d taken a short dip in the lake the day before, jumping off a bridge with just our swimsuits – no wetsuits – and swimming over to the beach where the swim start was to take place. I felt pretty comfortable, a lot more so than I remembered being in this lake.

When it was time for my swim start, I seeded right on the buoy line, but kind of near the back of the pack. When the horn sounded, I was surprised that people didn’t bolt to start swimming so I pushed ahead of them and got myself started. I felt a lot more confident in the water than I have in the past, and took a straight line to the turn buoy, getting in the mix. I felt like I was swimming a more direct line – difficult with the glare from the sun in this race – and also with more strength than in swims past. I didn’t feel like I was really getting passed/caught much and was doing a fair amount of passing myself. Thus I was surprised when I emerged from the water with a slower swim time than 2015 by nearly two minutes. I haven’t compared Garmin distance but overall swims looked slower this year and my finish % was a good bit better this year. Another factor could be that I used a sleeveless wetsuit this year, so less of that buoyant neoprene.

I remember transition being right in front of swim exit and also by bike out but it seems like it moved to the left a bit this year. I had to drag my bike from transition through about 100+ meters of sand to the mount line, and my transition time was about :60 slower this year.

The climb up to Donner Pass on the bike course starts immediately, so my breathing and HR were pretty nasty coming right out of the swim into that stretch. I also needed to determine good times to take in nutrition. I had forgotten to pack the cage for my BTA bottle so I was relying on my rear cage as my only hydration. I don’t get a lot of practice using this on the move, especially at race effort, so I wasn’t very smooth with this. The times when I was negotiating the cage were the only instances on the main climb where I would get caught/passed. I felt strong and was rolling right by everyone.

After the bike turnaround, there was a long, long climb back to the rollers before descending Donner Pass. After the turnaround, a lady caught me who was in my age group and we leap frogged along the climb based on who was taking in nutrition. My gear and equipment are pretty old these days, at least in the tri world, and it can be intimidating when the other girls in my AG show up with the newest, fastest bikes and accessories. This gal had all of that. And she *looked* like a cyclist. I just kept telling myself that there was one discipline left in the race and it was my strongest. I was certain that upon cresting this long climb and reaching the rollers, she’d really drop the hammer on me. As we neared the crest, I decided to act first and hit a bigger gear and went for it. I kept waiting for her to roll up beside me on her fancy bike and disc wheel, but I never saw her again. The descent back down to Donner Lake was much less frightening and much more fun that I remembered! 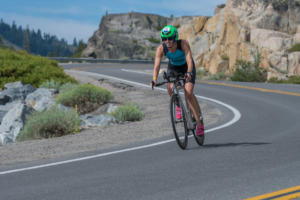 Because the screaming descent takes you right to T2, there is a spot as the descent levels out where you must stop and put one foot down and then continue to dismount. I did that and ran back through the sand to T2. I guess that was good prep for starting the run. I racked my bike and was out fairly quickly though again slightly slower than in 2015. 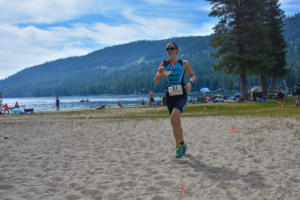 Starting the run, in the sand, with visor in hand.

I was expecting to feel kinda terrible on the run but actually felt pretty strong! It was a nice feeling but I really didn’t see anybody for the first mile, so was wondering if the course had changed and if I was going in the right direction! I did finally come up on all the people who were just ahead of me and there was a good stream of folks to try and pick off while looking for the pony tails. As I got to the far end of the lake, a gentleman volunteer gave me some encouragement on my running and I soon spotted a gaggle of ladies across all age groups. After that were the super-tough climbs on the back half of the run course and there weren’t many folks on that stretch to try to reign in, so it was a bit challenging but helpful to know that I was closing in on the finish line. I could see on my watch that I was in a position to beat previous year by 5+ minutes, so was incented to keep running hard and see what I could do. I noticed I was dripping sweat, which rarely happens to me out west. The day was humid and 10-15 degrees warmer than the last time I’d raced the course. The water stations were well-placed for taking in fluids and dumping them overhead. 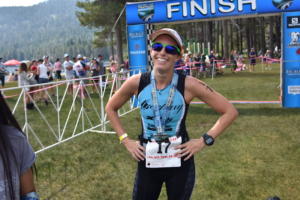 I don’t remember posing for this photo, but clearly I was pleased with myself!

I finished more than six minutes faster than in 2015 and was shocked to hear that I was the second female to cross the finish line, though did end up third since the lady behind me also started in a wave five minutes back from me. I was most excited to see that I had bettered my bike split by seven minutes with four of those coming on the main 3-mile climb and then I was still able to run a minute faster on a hotter day. Yay for improving with age!! Makes me excited to keep racing 🙂 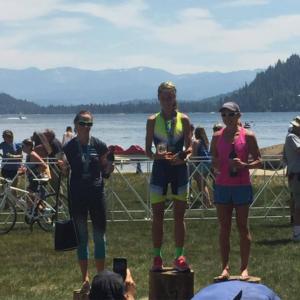