The Oakland Tri Fest was my first multi-sport event in California when I moved here three years ago. I raced it two weeks after moving as a way to check out the local multi-sport scene. It was fascinating in that respect and I also met two of my now-close training partners and friends at the event. Earlier this year, I volunteered at another event put on by the Oakland race organizers, USAP, and in return received a discounted race entry. I opted to use that entry on the Oakland event given my experience three years ago – and that it was close and convenient from home (!) – and that it was to take place two weeks prior to Ironman 70.3 World Championships, great timing for a tune-up.

On race day, Michael and I woke up super-early to get to the race venue right around 5 AM. There were some logistics to consider with a point-to-point swim and a very long transition: dropping off shoes at the swim exit from transition and getting 1K down to the swim start. It was nice to see friends from my club at our club bike rack in transition and prep for the day with them, as that creates a more laid back race day feel, which has been a big goal for me this year. After setting up transition, we walked over to the swim exit to place our shoes. I normally would not do this (put on shoes for transition), but the transition was long – at least a quarter mile – and it was on city streets/surfaces and included climbing and descending six flights of potentially slippery stairs to cross a pedestrian walk way over train tracks. No reason to chance incident or injury during all that with my A-race two weeks out, and I could probably do this more quickly with running shoes on my feet! The shoe drop had cones so that people placed there shoes according to race number, and I opted to wedge mine into the horizontal railings above the shoe drop, coming up the dock out of the estuary. I assumed I wouldn’t have to bend down as much to grab them from the railing and that they’d be easier to find than if they were lined up with dozens of other shoes. I then put on my wet suit, which always feels like an aerobic warm up itself, and walked down to the swim start in some of Michael’s old flip flops. 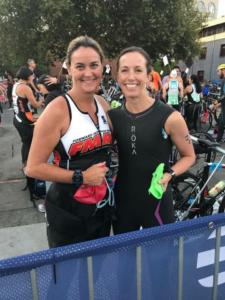 I got in the water about ten minutes before my scheduled wave start to splash around and warm up. It was helpful in getting used to how salty the water was – I wasn’t expecting that – and getting my goggles leak proof. The swim is a deep water start in a cove, where athletes swim a box-shape around cones and then take off in the straight line with the current down to Jack London Square. The current wasn’t extreme, but I could feel that I was moving well, so it was definitely there. The swim seemed to go fast, and aside from the start, was fairly un-physical.

I wrapped up the swim and hoisted myself onto the floating dock, and ran up the ramp to the boardwalk where our shoes were stashed. I had already taken off my goggles and pulled down my wetsuit. I knew I could run fastest while wearing running shoes and no wetsuit for the long T1, so I took the opportunity to snag a bench by the swim exit where I could pull my wetsuit off while shoving my feet into the old pair of running shoes I’d brought for the T-run. I saw Michael, Carrie and Madison cheering during the first stretch of T1 as I was taking off prepared to hustle. 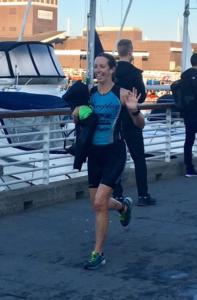 I didn’t feel tired from the swim, and I wanted to use T1 to make up for as much swim time as I could, so I ran hard. I noticed I was running by a lot of people still wearing their wetsuits. As difficult as it was to round the sets of stairs with my hands full of wetsuit, cap and goggles, I still felt like I was being aggressive with transition speed. And I did have the fastest female T1, a win for this girl who usually has a T1 that suggests she was enjoying tea and cake or taking a nap :).

The bike course is the part of this race that gives the sense of “urban triathlon” the most. It’s comprised of a lot pot holes, u-turns, sharp rights, train tracks, speed bumps and other items that you might not experience in a typical triathlon. These are the elements that make the course technical and allow it to really slow you down. I haven’t been riding my tri bike outside much to work on bike handling skills so was red-lining on the clear straightaways to make up for the lost time on the rest of the course. This was two loops of the sprint course and it seemed to go by very fast. Despite the technical aspects, it was still an Olympic bike course PR for me.

In T2, I focused on changing from bike shoes to run shoes, and kept telling/reminding myself to take off my helmet before leaving transition. There was definitely a race where I had to entrust my bike helmet to an unsuspecting and honest-looking spectator on the run course! Again, I felt like I was racing the transitions and had the energy to do so, which I actually feel is an extension of fitness more than a “fourth discipline” in and of itself, as I remember in races in previous years being so spent coming off the bike that I felt I needed to linger longer in T2 to collect myself. I was the only lady to complete T2 in under a minute and won that, too, ha!

On the run course, I didn’t see many people, even fewer than I did running at Donner Lake Olympic. This course was a lollipop. I passed a couple guys, and a couple guys passed me, but I didn’t see any other ladies. I started to see other racers coming off the lollipop and heading back towards the finish, but they were just starting their run and heading out to the loop. I was starting to finally get tired on the last mile, and that was my first one slower than 7 minutes. I had been consistently hitting my sub-7 splits on the run, the best Olympic run I’d even had. I also finally caught a glimpse of a female racer ahead of me as I was navigating back to the finish on that last mile. Right at mile 6 we came to the train tracks, meaning six flights of stairs up, and then down. I was getting closer to the other lady, but there wasn’t much left of the course at this point! I ended up finishing :15 behind her, and since she started in my wave, my race finish time was :15 behind her, too. She was the first female finisher overall and I was second! Though that makes you wonder: would I have been able to run just a little faster had I known that information?

Overall, I was really happy with this as a tune-up race in the sense that I felt relaxed and confident, and was able to “race” from wire-to-wire, even feeling strong in transitions and throughout nearly the entire run. And I got to see old friends and make new ones! Another great event from USAP, and with complimentary Sierra Nevada brews and burritos at the finish line, the mark of a great event 🙂