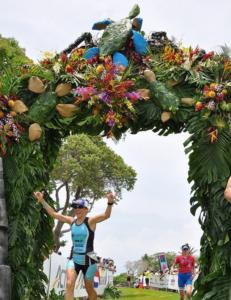 Pam is going into her fourth year in triathlon, after being a runner for more than 20 years. Competing in distances from sprint to full Ironman, Pam considers the journey “continuing education,” always striving to learn more, especially with cycling and open-water swimming. Along with regional races in California, Pam has also traveled to Canada and Hawaii to complete in 70.3 and 140.6 races. She plans the same for 2017, with a focus on improving her times on courses on the Big Island and in Mont-Tremblant, Canada. In addition to triathlon, Pam enjoys flatwater kayaking, downhill and cross-country skiing, and snowshoeing.

Aside from the physical and mental benefits of athletics, Pam values the friendships forged with people all over the world, all connected through triathlon, running, cycling, swimming and other sports.

Pam lives in Sacramento close to the American River Parkway, and works fulltime at an aerospace company. You’ll often find her training on the Parkway or in the nearby Sierra foothills. In winter she enjoys downhill and skate skiing in Tahoe. Pam considers the Parkway and nearby Lake Natoma to be a couple of the region’s greatest assets for running, cycling, swimming, paddling, dog-walking, and seeing wildlife. Outdoors is her “gym,” and she loves to inspire others to #FreeplayOutside.

The Ups and Downs of Ironman Canada

“We travel, initially, to lose ourselves; and we travel, next, to find ourselves. We travel to open our hearts and eyes.” I read this quote from Pico Iyer before my trip to Whistler for Ironman Canada. The trip would be my third to Canada in thirteen months, each time...

My Road ID bracelet, in addition to having all of the pertinent contact and medical info, says, “Be Positive, Be Grateful.” That sums up how I approached Ironman Hawaii 70.3 (“Honu”). Roll back the reel to the beginning of April, when I badly strained my Achilles...

You know you’ve done it, too. Felt a niggle during your training. Maybe a bit of a limp after your run. Some specific pain you thought you could run through without being out of the game. So, with big races on the schedule this year, I committed all of those athletic...

Into the Cosmic Tree

That spade. That Freeplay spade. What does it mean? A quick Google led me to a definition of a leaf representing life on the cosmic tree. Other meanings were strength and wisdom. And then there was death. Geez, let’s forget about that last one! Now I need to read up...