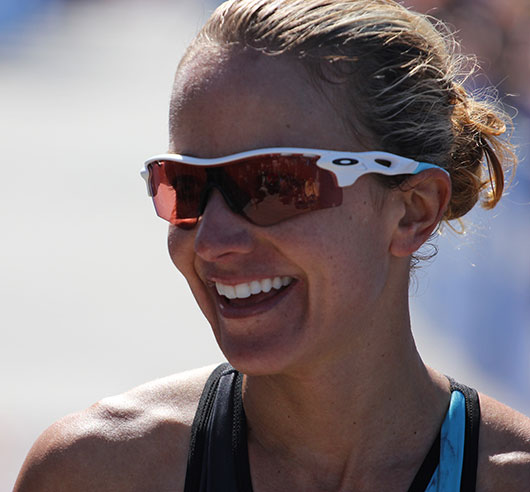 In the days leading up to Oceanside I had worked 5/7 days before the race and 4 of these days were night shift. Needless to say, I was sleep deprived and cranky. I drove down to Oceanside solo which gave me some time to decompress and reflect on the task ahead. Oceanside is always a mixed bag with its early season timing and weather on the coast is fairly unpredictable. I approached this race as a testing ground- I have been fairly consistent with my training and just made some major adjustments in my bike fit- this could go either way.

When I arrived in Oceanside I was given the opportunity to stay with my Freeplay team mate in a very relaxing set up. I arrived at the expo with a sort of melancholy attitude- this was surprising given how much energy was around. Was I already burnt out before the season began?

The morning of the race I woke up with “fight” in my blood and the heart flutter of the starting line became a reality. I was looking forward to getting the swim over with and putting in some power on the bike. The swim went well- not as sea sick as I was last year. Getting on the bike I looked forward to testing out my pre-season focus on leg strength. Much to my disappointment my new bike fit had not served my leg strength well and the majority of the bike I felt incapacitated- without power or “umph”. I experienced early numbness down the legs bilaterally and extreme quad cramping. I came to Oceanside to ride hard- but had to conserve to be consistent.

Off the bike it felt warm. I typically shut down in heat but in this race I was determined to overpower this mental road block. At each aid I took ice and a water bath. I power walked the pier and baby stepped the hills in a 50step/walk count when needed. By the end of the run my feet were so macerated from my water shower plan that each step felt like blisters were popping.

I learned a lot at Oceanside…sleep is important in the days leading up to a race, don’t change your bike fit a week before a race, water showers on the run are less then ideal if you want to be able to walk on your feet following the race. My biggest take away is that being a triathlete is more than training and racing, it’s a lifestyle. Your body is a machine- fuel it like a racecar and drive it like your stole it. I am refocusing my training on nutrition and running. I am still on the fence between St. George or maybe something local like Auburn Triathlon 70.3. All I know is I am ready to beat it up again- next time I expect bigger results. Onward and upward.