Gila Up Next for Team TIBCO-Silicon Valley Bank 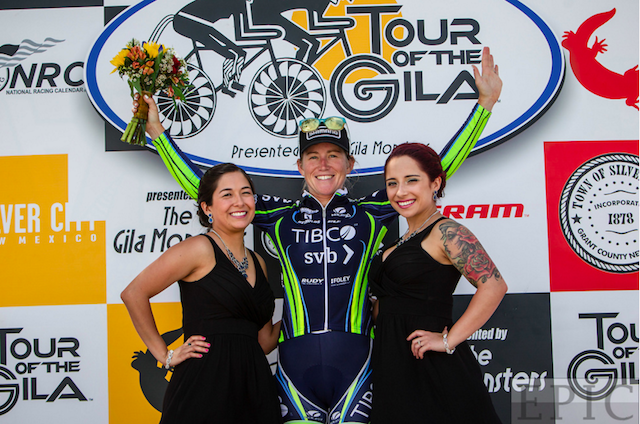 Silicon Valley, California — Team TIBCO-Silicon Valley Bank heads to New Mexico this week for the 30th edition of the Tour of the Gila.

The team goes into the May 4-8 race with multiple cards to play, including Lauren Stephens who finished third overall and won the stage 3 time trial in 2015. Brianna Walle is no stranger to the desert either, having finished in the top 10 last year with the Optum squad. Team TIBCO-Silicon Valley Bank’s neo-pro Cheryl Clark will be in the time-trial mix as well after a solid over-all showing at the recent Joe Martin Stage Race.

The Gila is notorious for its climbing over three road stages. It also features a long individual Time Trial and criterium. Everything considered, the race presents an opportunity to pit the mountain jockeys against the purveyors of power, said Ed Beamon, general manager Team TIBCO-Silicon Valley.

“Solid teamwork and smart tactics will be important for us as we attempt to unseat the pure climbers in the higher elevations around Silver City,” Beamon said. “If we get strong TT efforts from Brianna Walle, Lauren Stephens and Cheryl Clark, we’ll have multiple options to challenge the mountain goats, especially in the later stages of the race.”

The Tour of the Gila is the second North American stage race for Team TIBCO-Silicon Valley Bank this season. Stephens finished third overall 10 days ago at the Joe Martin Stage Race as well as winning the final stage of the event. Walle finished in fourth place on the general classification.

“I think the team is riding very well together and showing a lot of spirit and coordination,” Beamon said. “Gila is always a challenge, but we’ll focus on team chemistry and rely on our depth as we target specific stages with an eye on the final overall podium.”

Stage 1 of the Gila starts Wednesday, May 4 in Silver City and ends 73 miles later near the ghost town of Mogollon. Stage 2 on Thursday is a 75-mile road race. The 16-mile Gila time trial is on Friday. Stage 4 is a criterium in downtown Silver City. The final fifth stage on Sunday, May 8 is another road race at 69 miles.