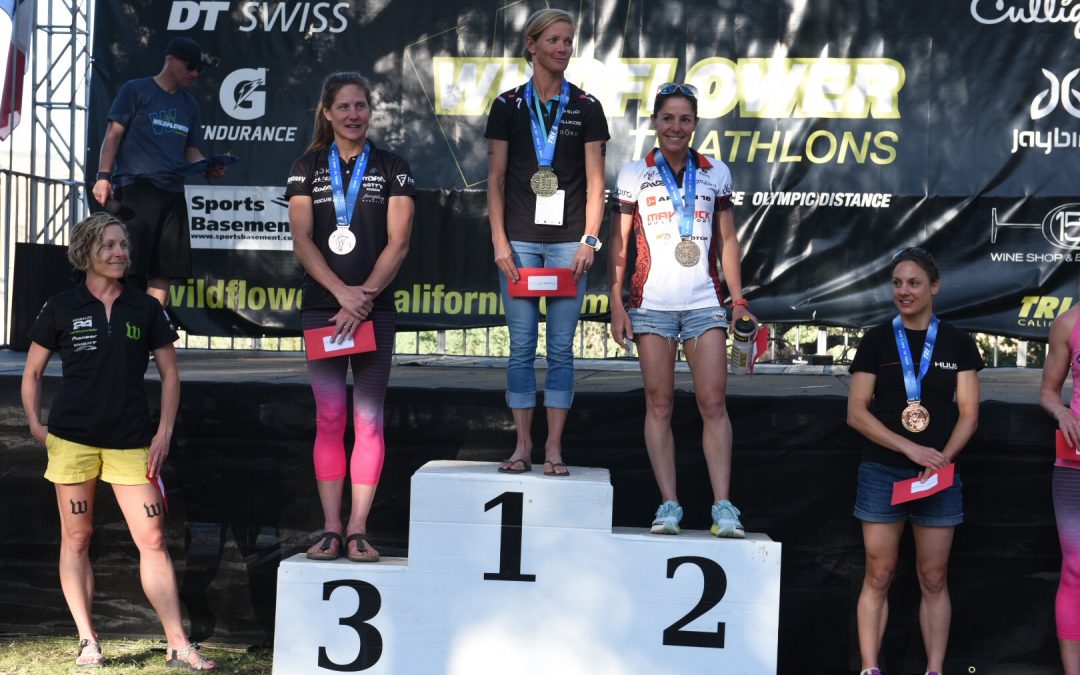 PASO ROBLES, Calif. (May 1, 2016) – Jesse Thomas of Bend, Ore. does it again; winning a sixth consecutive championship and solidifying his spot as a Wildflower legend. Liz Lyles of Reno, Nev., also returned to seal a second straight victory. Both champions enjoyed a comfortable lead as they strode into the finish line on Saturday, April 30.

In the women’s race, Lauren Goss and Emily Cocks were first out of the water while Liz Lyles used the 2.2-mile run to make up her deficit from the swim. On the bike, the women quickly spread out until Cocks and defending 2015 Wildflower Champion, Liz Lyles, reached the bottom of Nasty Grade at Mile 41 together. Lyles pulled away on the grade to build a 1:30 lead over a chasing Laurel Wassner of New Paltz, N.Y. as Cocks continued to drift back by a few minutes.

Lyles led the women into T2, with Wassner and Cocks dueling for 2nd and 3rd as they exited transition. Out on the trail, Lyles ran away from the field lengthening the gap by mile seven. Last year, Lyles had a dramatic sprint finish against pro Heather Jackson, who passed out in the chute, thereby securing Lyles’ first Wildflower victory. This year, Lyles finished in 4:42:17 and enjoyed an almost six-minute lead over her 2nd place competition, Laurel Wassner, who finished in 4:48:42, with Emily Cocks taking 3rd with a 4:51:33. The swim-run-bike-run format really seems to suit Lyles. “It really doesn’t feel like 2 miles (T1A-T1B) and to take the 2 miles off at the end is the bigger bonus for me,” said the 2016 Wildflower Champion, Liz Lyles.

Lake San Antonio offered sunny skies and cool breezes as the Elite Men lined up to start the race this morning. Only 25:16 later, Thomas Roos of Palo Alto, Calif. would exit the 1.2-mile course with the fastest swim of the day. Jesse Thomas and fellow Bend teammate, Matt Lieto, exited the water one minute later in 11th and 12th place with Thomas quickly making up time on the 2.2-mile transition run to be the first athlete out of the bike transition.

On the bike, Wildflower course record holder, New Zealand’s Terenzo Bozzone, and Jason Pedersen of Porter Ranch, Calif. took the lead from Thomas. Near the 20-mile mark of the 56-mile course, the trio had a 1:30 lead on 4th and 5th place riders, Lieto and Ben Collins of Chicago, Ill. Thomas, kicking in some speed, overtook Bozzone and Pedersen to be the first to reach the top of the notorious Nasty Grade and held his lead riding into T2.

Bozzone closed Thomas’ lead as they headed into T2 and by mile one of the run, he and Thomas were running shoulder-to-shoulder. Today, was again to be Thomas’; running a smoking 6:40 pace for the 11.2-mile run, he dropped all of his competition and sailed into victory with 4:05:32, finishing almost 3 minutes ahead of Bozzone’s 4:08:17. Thomas and Bozzone were followed by Chris Lieferman of Longmont, Calif. who took 3rd place. “It’s been a remarkable journey. Each year has been special and this year is no different to race a guy like Terenzo who clearly dominates the sport of triathlon,” said six-time Champion Jesse Thomas.

Glancing across at the top three male and female elite finishers, all in their 30’s and 40’s with the exception of Leiferman (29), Cocks couldn’t help but point out that there were, “all old people on the podium.” Wildflower Triathlons, like this year’s champions, just gets better with age.

Tri-California Events is an event management company producing triathlon, swimming, and running races throughout California including the Wildflower Triathlons, San Francisco Triathlon at Alcatraz, Alcatraz Challenge Aquathlon & Swim, The Triathlon at Pacific Grove, and Scott Tinley’s Triathlon. In addition, Tri-California served as the race production company for the Nike Women’s Marathon and The San Francisco Giant Race.  At Tri-California, our goal is to motivate individuals of all ages and fitness levels to lead a healthier lifestyle by “exercising with purpose” and participating in an endurance race. For more information on Tri-California Events and upcoming events, please visit www.tricalifornia.com.