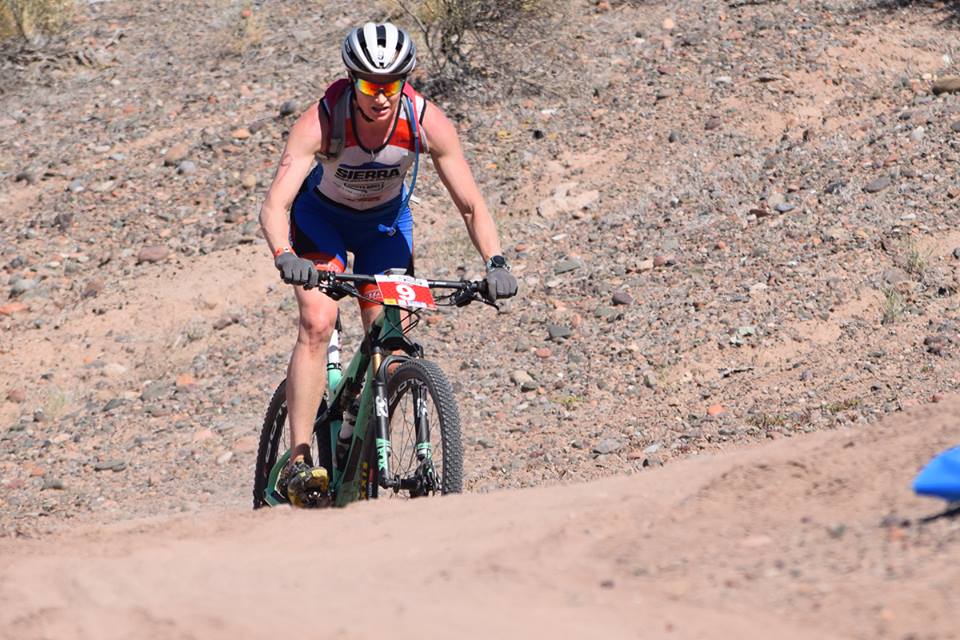 It’s the first XTERRA win for Tellechea, and the 8th in Snyder’s storied 13-year career.

Today was about as opposite as you could get. Last year, cool and rainy, this year hot with bright sun. XTERRA Argentina came off almost flawlessly today.

The “dique” or dam was full of warm water and our athletes lined up for the swim start looking west towards the snowcapped Andes in Chile, where the show goes next week. The gun went off at exactly 10am with the elites in a non-wetsuit start one-minute ahead of the wetsuit-optional age groupers.

“The swim was a bit long,” laughed Brazilian pro Sabrina Gobbo. “I felt like I was paddling forever,” agreed Kara LaPoint.

French Canadian Jean-Philippe Thibodeau was first out of the water and onto the bike. He was followed by a group that included Frenchman Julian Buffe, American Branden Rakita and the two-time Olympian Tellechea.

Tellechea is a true local boy from San Juan and is an Argentine star. He represented Argentina at the 2012 and 2016 Olympics and has podiumed several times in world cup events. It did not take the local speedster long to take the lead. Tellechea, who grew up riding mountain bikes, held a comfortable lead through the technical sections about half way around the first lap.

Thibodeau held strong in second with Rakita looking good in 3rd. “Mad Maximiliano” Morales had given away over 3-minutes on the swim but was charging hard and was gaining ground, already up to 5th behind Julian Buffe.

For the women, Snyder (pictured above) controlled the day. She was first from the swim but about 500m out on the bike she came past me and I heard a ‘pfssst’ and sure enough she had to stop to fix a flat.

“I knew no woman had gone by but I started riding way too fast,” she said after the race. “I was a bit over my head and crashed pretty good before I told myself to calm down and ride my race.”

In second position was young French pro Morgane Riou. Morgane has been working hard on her biking skills and she was safely in 2nd place when her front wheel slipped out at a twisty bit and down she went. So, the top two women had both come off their bikes.

Kara LaPoint nearly did not start this morning. “I was so sick at 7:00 I said no way I can race today. I turned off the alarm and went back to sleep. I got up about 8:30 and felt better and said I’d give it a try.” Try she did soldiering bravely in 3rd.

The plot thickened in the men’s race with Tellechea still holding the lead and Thibodeau in second but Morales was getting close and was now up into 3rd, Branden 4th, and Buffe 5th. That’s the way it stayed going into-and-out of T2.

The race has a bike/run crossover and organizers solved this by making a bridge the runners go over and bikes go under. The evil (and fun) thing is immediately after the bridge is a 3-foot high hurdle before you head out to the desert for an agonizing 10.5K.

“Morales passed me about the 4K mark and I couldn’t stay with him,” said Thibodeau.

Morales had put in the fastest bike time and was now flying on the run. “I was not too worried about staying in front,” said Tellechea. “I know Morales and usually can run a bit faster than him, but not too far into the run my right leg starting hurting and I had to watch my pace.”

Indeed, Morales caught and passed Tellechea, making time on the up-and-down sections through the desert. Going into the last 2-kilometers the run the course follows a dry riverbed. When they got back on the flats Tellechea sprinted past Morales and the race was on. They shadowed each other for a long while before the younger man took charge to win by 25-seconds. Thibodeau kept strong into 3rd and Yank Branden Rakita came 4th. Buffe was suffering in the over 90-degree heat and dropped to 7th. Spain’s León Martin Drajer was 5th.

In the women’s race Snyder was way out front to take a very strong win and 13th overall. Riou had her best XTERRA yet with a good 2nd-place showing well ahead of the brave, but struggling Kara LaPoint. Brazilians Sabrina Gobbo and Laura Mira Dias finished 4th and 5th, respectively.

After the finish line athletes were greeted with a nice, chilled box of fruit, ice cold water or Gatorade and shade. While there was a breeze that helped, this course has not one tree to ride or run under. Combine that with a cloudless, sunny day with temps over 90 and it was tough.

So, we have a new face as a winner and a strong start to the Pan Am season. Max Morales had the fastest bike and run splits and promises to work in the pool. I spoke with more than a dozen athletes from Chile, Brazil, Costa Rica and Argentina that will do at least four races in the series. It seems the South American athletes want more XTERRA, and we will give it to them.

Full marks to organizer Jose Arancibia, his wife Laura, and his staff for a great weekend of racing … and, it is not over. Tomorrow (Sunday) there will be trail runs and more mountain bike races. They call it XTERRA Fest and indeed it is. With Chile next week and Costa Rica following, this trifecta of races in wonderful places has a lot of appeal. Combine all this with inexpensive living and fabulous Argentinian Malbec and Chilean Cabernet and you have even more reason to put the Pan American Tour spring schedule on your calendar.

“The race today was interesting,” exclaimed Snyder. “I got a great result with a win, but it wasn’t pretty! It was definitely a ‘shake out the cobwebs and remember how to race again’ kind of day! The organization was great and I can’t thank XTERRA Argentina enough for their help in making this trip possible for me and for putting on a great event! It’s been a little crazy adapting to the time and culture differences (dinner at 9 or 10:00 and getting to bed at 1am!) and sometimes getting things a little mixed up because of the language differences can lead to less than ideal training and recovery, but that’s just the way things go when traveling and racing in foreign countries sometimes. I am thankful to have Branden and Kara here to share the experience and adventures with! The toughest element of the day was probably the heat, especially considering how exposed the course is- there’s not even a single tree out there on the rocky landscape. I expect Chile to be similar; a tough course and also very hot so hopefully by the third race in Costa Rica we’ll be semi heat adapted?! The swim went well, though I was solo all the way. Not fast enough to stay with the men but faster than the other women so I just went my pace and focused on sighting and swimming straight. On the bike I only rode a few hundred meters before having to stop to air up my front tire. I had trouble with it holding air earlier in the week but it seemed to be holding yesterday…too bad it didn’t last through today. After that I think I was riding a bit too hard to make up time that I lost and with a bit too much air in the front I had trouble controlling the bike in some of the deep sand and rutted descents. I crashed hard once and had trouble getting into a rhythm but managed to settle in better on the second lap. Going out on the run I didn’t know what kind of lead I had but I felt strong so I pushed it for the first couple miles up the dry river bed which was deep, loose sand and rock. My left lower leg was bruised pretty badly and swollen so I didn’t have much control of my ankle so it kept rolling on the uneven rocky terrain. I also missed a course marking and ran off course for a couple hundred meters once. Oops. It’s amazing how you forget in only a few short months how it feels to suffer at race intensity and it’s also a painful reminder of what happens when you don’t control the emotion and effort well.”

XTERRA Argentina was the fourth of 41 events where amateur athletes from around the world could qualify to race at the 22nd annual XTERRA World Championship at Kapalua, Maui on October 29.