LOS ANGELES (February 19, 2015) – Fourteen of the top women’s teams from around the world are confirmed to lead off the 10th edition of the Amgen Tour of California with three days and 158 miles of stage racing May 8-10 and an invitational Time Trial on May 15. The four days of women’s competition will be staged in conjunction with the men’s eight-day race.

Powerhouse teams such as Velocio-SRAM (formerly Team Specialized-lululemon), which ranked second in the world last season, and Alé-Cipollini boast rosters with some of the most decorated women in the sport will compete in what many experts believe will be the best women’s cycling event ever to take place on U.S. soil. Several of the teams expected to put forward top contenders for the overall win are also mounting counterparts in the men’s race, including Optum p/b Kelly Benefit Strategies, BMW p/b Happy Tooth Dental (under the same management as Team SmartStop) and UnitedHealthcare Pro Cycling Team.

“After finishing in third place at La Course at Le Tour de France last year, I’m energized by the increased dedication to women’s professional cycling by the biggest professional cycling race in North America,” said Leah Kirchmann, Optum p/b Kelly Benefit Strategies and Canadian National Champion. “The course looks amazing and I can’t wait to be a part of the Amgen Tour of California.”

The full list of teams that will race May 8-10 includes: 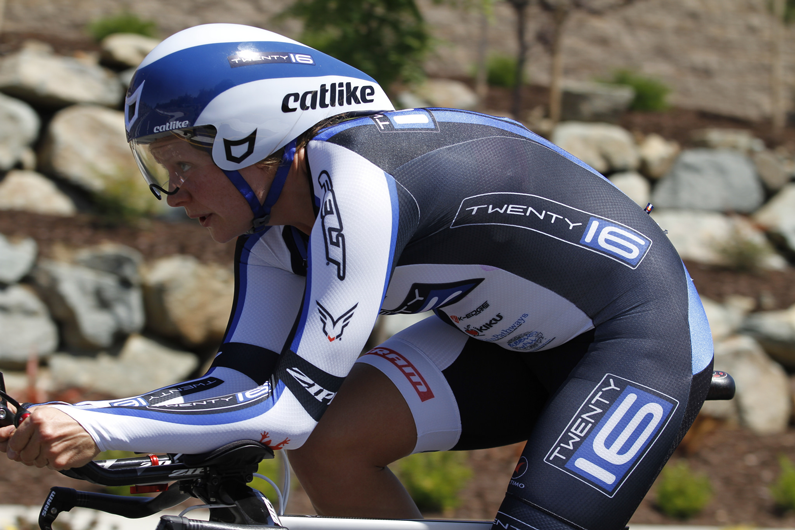 Full rosters will be available in May for the first of its kind three-day stage race as well as the Invitational Time Trial event.

“Cycling attracts extraordinary athletes, and we’re thrilled to provide the women with a bigger platform this year as we continue to expand our commitment to women’s professional cycling,” said Kristin Bachochin Klein, executive director of the Amgen Tour of California and senior vice president of AEG Sports. “We look forward to our fans experiencing the best teams in the world racing in California in May.”

The Union Cycliste International (UCI)-sanctioned women’s team stage race will travel through South Lake Tahoe on a scenic but challenging course filled with climbs May 8-9 before concluding with an exciting and fast-paced circuit race in Sacramento May 10, the same day and location where the men’s race begins hours later. For the fifth year running, the world’s top-ranked time trialists are also being invited to race against the clock during a UCI-sanctioned women’s Invitational Time Trial preceding the men’s Time Trial (Stage 6) May 15 in Big Bear Lake.

Empowered with SRAM, one of the Founding Partners of the Amgen Tour of California Women’s Time Trial, the four day women’s cycling event serves as a chance for female cyclists to display the powerful and exciting racing they are known for around the world.

“We are once again excited to further the growth of women’s cycling and particularly the all new women’s Amgen Tour of California stage race,” said SRAM Vice President of Marketing David Zimberoff. “As a global bicycle component manufacturer, a portion of our message is empowerment, and giving women more opportunity to showcase their talent is the perfect expression of that.”
“We are excited for a race of this magnitude to continue to expand its commitment to women’s team racing. It’s great for the riders, the fans and the sport overall,” said Kristy Scrymgeour, Velocio-SRAM team manager. “It’ll be a strong line up, so we’re looking forward to some great racing.”

As part of a multi-year partnership, Lexus will serve as a premier partner of the Amgen Tour of California women’s stage race and award the winner of the stage race with a two-year Lexus NX luxury compact crossover lease. The bold NX offers a utility-focused alternative to a sport sedan.

Fans won’t want to miss a second of the action during the 2015 Amgen Tour of California women’s stage race and Invitational Time Trial (route and start times are subject to change):

The first ever Amgen Tour of California women’s UCI stage race will kick off in spectacular fashion. The 74-mile stage starts and ends at the Heavenly Mountain Resort high above South Lake Tahoe. This is a reenactment of the most gorgeous race that never was – in 2011 the men were supposed to race the scenic loop around Lake Tahoe until a freak May snow storm caused a cancellation. Just as well that this beautiful course was saved for its debut as part of the tenth anniversary edition Amgen Tour of California, and the first three-day women’s stage race of its kind. The counter-clockwise loop around the perimeter of Lake Tahoe provides a bit of everything a race should have: twisting descents, fast straights, two challenging Queen of the Mountains (QOMs) and stunning views. The day will end with the brutal climb up the 15 percent grades of Keller Street back to Heavenly. This opening stage will produce a worthy winner from the international field.

Sure to be a crowd favorite, this circuit features great spectating opportunities with chances to see the women race by up to three times per lap. Heavenly Mountain Resort again hosts the start and finish for Stage 2, but with a different approach. This 25-mile circuit will be tackled twice, but instead of scenic lake views, the women will head into the tall trees of the Lake Tahoe forests. After a quick descent from Heavenly, they will ride off to the beautiful canyons of state Route 89, but the return trip may not provide for sightseeing. The second half of the course features the switchback QOM of Apache Avenue followed quickly by the climb back up to Heavenly on Ski Run Boulevard to the finish line, and the end of two very challenging days in Lake Tahoe.

After two days favoring the climbers, Stage 3 is designed to let the sprinters come out to play. This flat and fast two-mile circuit has been used as a men’s finish circuit on multiple occasions, including this year. The climbers and their teams will have to hold onto the sprinters as they fight for the stage win and the many time bonuses that could vault them up the overall standings. The L Street finish line in the shadows of the California State Capitol building has played host to some of the greatest sprinters of the last 10 years, including Mark Cavendish, Mario Cipollini and Carmen Small who won the 2014 stage of the women’s circuit race.

Another crowd favorite, this day will give spectators the rare treat of seeing two international fields compete on the same circuit within hours. The women will blaze around the circuit between 11:15 a.m. and 1 p.m., after which the overall race winner will be decided. Fans can then enjoy the Amgen Tour of California Lifestyle Festival until the men rip into town just after 2 p.m. to finish their first day of racing. What more could a cycling fan want?

This is very flat and fast course. At 6,752 feet and featuring one of the most beautiful lakes in all of California, the course begins in the heart of the Village in Big Bear Lake with 20 of the best women time trialists in the world competing prior to the men’s Stage 6. The first three miles of the route wind through a residential area along the south shore of the lake. Taking the Stanfield Cutoff across the lake, the course turns left and continues on Highway 38 to the town of Fawnskin. As the route turns back to the City of Big Bear Lake, expect large crowds in Fawnskin to cheer the riders coming and going. The return back into Big Bear Lake will essentially follow the same route.

As the route makes a right onto Big Bear Boulevard, with just 0.6 miles left, the riders will make a right onto Pine Knot Avenue for the final sprint to the finish line and onto a 1,000-foot jetty greeted by thousands of cheering fans. Cyclists are presented to a one-of-a-kind waterfront finish with spectacular panoramic views of Big Bear Lake.

For further information about the Amgen Tour of California and to experience the race like never before with VIP Access, please visit www.amgentourofcalifornia.com.