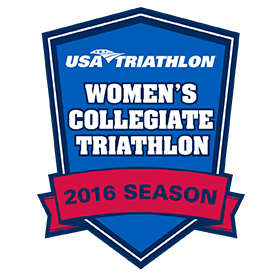 COLORADO SPRINGS, Colo. — USA Triathlon today confirmed the four events that will be contested as part of the 2016 women’s collegiate triathlon season, culminating in the Women’s Collegiate Triathlon National Championship on Nov. 5 in New Orleans.

The Women’s Collegiate Triathlon National Championship and three regional qualifiers will showcase the structure implemented in 2014 for the inaugural season, with a maximum field of 75 women racing on a draft-legal 750-meter swim, 20-kilometer bike, 5-kilometer run course. Triathlon received overwhelming approval through a voting process in January 2014 at the NCAA Convention in San Diego by Division I, II and III colleges and universities to be included as an NCAA Emerging Sport for Women, and has a 10-year window to demonstrate sustainability as an NCAA sport option.

The top three five-woman teams from each regional qualifier, as well as a minimum of the top two individual women from those events, will automatically earn a spot for the Women’s Collegiate Triathlon National Championship on Nov. 5. The National Championship field will be limited to 75 women comprised of NCAA Varsity Programs and USA Triathlon-registered collegiate club teams. More information on invitation criteria is available at usatriathlon.org/ncaa.

Three of the four races held as part of the 2016 women’s collegiate triathlon season will feature age-group races, highlighting the community aspect noted on the proposal approved by the NCAA in January 2014. Age-group races include the USA Triathlon Draft-Legal Worlds Qualifiers in New Orleans on Nov. 5-6, which will allow top amateur finishers to earn spots to represent the U.S. at select ITU World Championship events.

Lake Louisa State Park was the site of the inaugural women’s National Championship event in 2014, as well as the 2015 event. Kelly Kosmo of UCLA claimed victory in 2014, and Colorado’s Abby Levine earned the individual 2015 title.

For more information on triathlon as an NCAA Emerging Sport for Women, visit usatriathlon.org/ncaa. For questions regarding events and programming, as well as invitation requests for the Women’s Collegiate Triathlon season events, contact Jess Luscinski at jess.luscinski@usatriathlon.org.

USA Triathlon is proud to serve as the National Governing Body for triathlon, as well as duathlon, aquathlon, aquabike, winter triathlon, off-road triathlon and paratriathlon in the United States. Founded in 1982, USA Triathlon sanctions more than 4,300 races and connects with nearly 500,000 members each year, making it the largest multisport organization in the world. In addition to its work with athletes, coaches, and race directors on the grassroots level, USA Triathlon provides leadership and support to elite athletes competing at international events, including International Triathlon Union (ITU) World Championships, Pan American Games and the Olympic and Paralympic Games. USA Triathlon is a proud member of the ITU and the United States Olympic Committee (USOC).