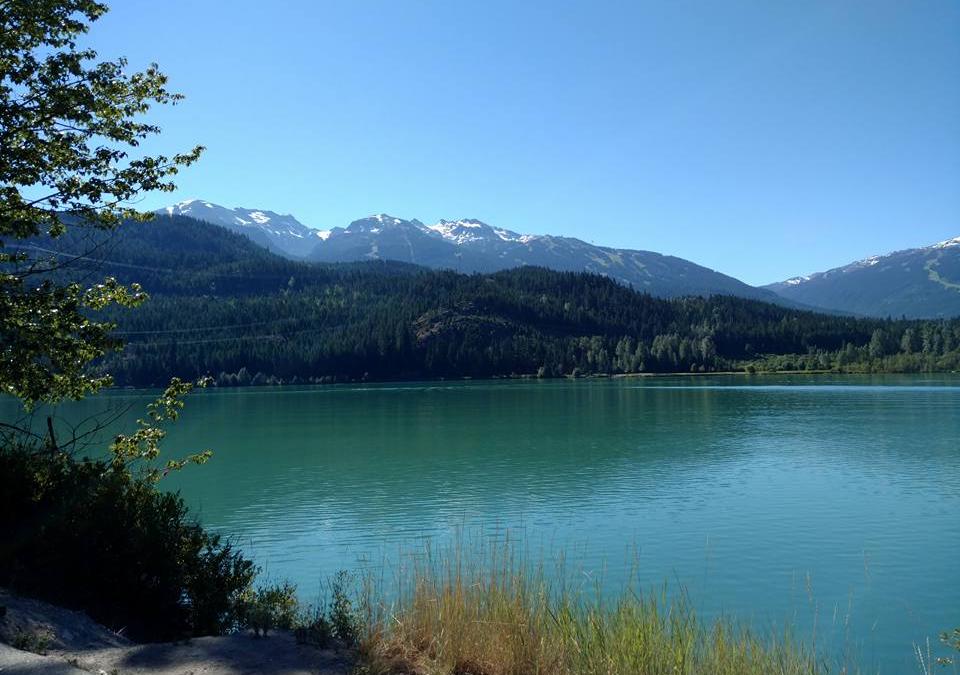 “Leave the beaten track behind occasionally and dive into the woods. Every time you do, you will be certain to find something you have never seen before.” Alexander Graham Bell, who spent part of his life living in Canada, is credited with this quote. It aptly suits my trip to Whistler, BC for Ironman Canada 70.3

Last year I did Ironman Canada as my second full IM distance. It has a beautiful swim and run, and one heck of a bike course – spectacular views and memorable (notorious!) climbs. I loved Whistler so much that I had to go back, but this time for the more manageable 70.3 distance.

Making the race really special was having my Canadian cousin Christine and her husband Jim travel hundreds of miles to be there for the race. Christine and I had never met; it was a highlight of my trip. It was their first experience at a triathlon. They got to take in the race energy and excitement in Whistler Village. 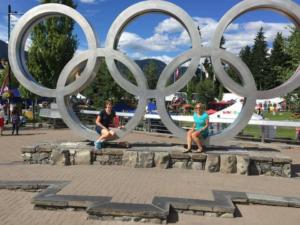 Race day dawned with good temperatures and seemingly ideal conditions. The full Ironman started at its typically early hour. The 70.3 didn’t start until mid-morning. I lined up in the rolling start and got going in the water. I’d felt slight tenderness in my right pectoral muscle before the race. I felt it more in the swim. I don’t know if that added to my feeling of not breathing well, but for the first time in a couple of years, I had anxiety during the swim. More than once I did a bit of breaststroke. I really wanted to quit, but knowing that Christine had made the big trip there for my race kept me going! As the swim progressed, so did the intensity of the wind. It got choppier than I’d dealt with before, and that taxed me. Finally, to the finish with my slowest 70.3 swim yet. I had to put it behind me and get on to the bike! 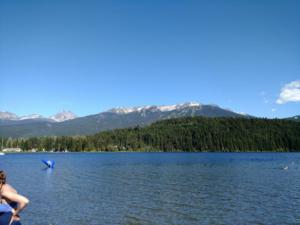 Alta Lake, where the swim takes place, has captivating views.

The bike course leads us out on to the beautiful Sea to Sky Highway where we headed toward Callaghan Valley Road, which was the site for events at the 2010 Winter Olympics. The 70.3 athletes turned around only 750 meters up this beautiful and challenging climb. Back on to the highway for a spin to Pemberton. We had a lot of downhill aided by a good tailwind. The road does have some climbs, but the “best” would be on the way back. I saw one athlete at the bottom of a steep descent on the ground getting medical aid. It kept me in check within my own level of descending skills. The turnaround took us back up those same hills, which added a couple of thousand feet of climbing (at least!). The climbs were made even more “fun” with some good headwinds and crosswinds. Getting back into Whistler meant reaching the relatively flat section and, as always, I looked forward to being off the bike. I ran into transition to grab my run gear bag, and was able to see Christine and Jim there, which pumped me up. 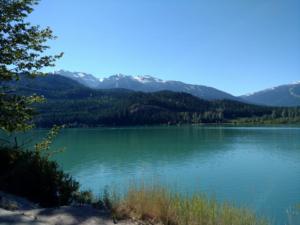 Beautiful Green Lake, which we pass on the bike and run.

I look forward to the run because it’s safer than the bike and it’s where I just about always catch up on a few people. I got going but didn’t feel as strong as I’d like. Within the first mile I felt my quads act like they were going to cramp (I rarely have issues with cramping). I walked about 10 seconds and got back to running. I stopped at aid stations for ice in my tri suit (thermal regulation in the afternoon sun!) and also kept up on my gel blocks and a couple of salt tablets. After a few miles I settled into a better pace. I’d caught a couple of people in my division and knew I needed to keep working as I assumed several more were still ahead. I still struggled physically and sometimes mentally, and took a few 10-second walking breaks (atypical for me in those conditions). The run took us past spectacular Green Lake, which we’d also passed on the bike. Several miles are on a pedestrian/bike path with a canopy of trees. Unlike last year, I didn’t see any bears during the run! The miles clicked down and finally I was back into the Village with just a few turns to make before turning onto Blackcomb Way with a nice little descent to the finish line. 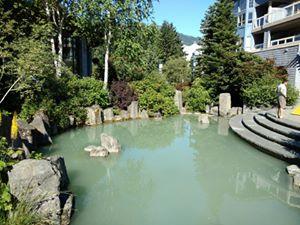 A beaitofi; water feature we pass in the Village as we near the finish.

I was back to feeling stronger and saw Christine and Jim on the left as I ran toward that arch. I was so glad to finish! It was one of my slowest times, but for me, that’s due to the bike course, which I consider more challenging than any of the other 70.3 courses I’ve done.

I ended up in 6th in my division, less than two minutes behind 5th. Yes, I’ve thought about where I left those two minutes on the course, more to learn from it than to berate myself. I consider the race a big block in the training, where I gained additional fitness and strength.

So into those woods I went, and although it wasn’t the ideal day for me, I found some things in me I’d never seen before, all to learn from for the next time. 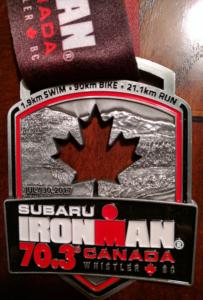 I love the maple leaf on the finisher’s medal.