Two Races, One Day: From Triathlon to Criterium 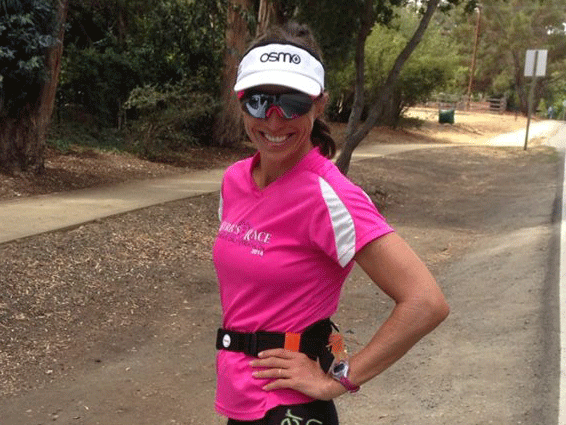 Liza Rachetto, cyclist and triathlete for Vanderkitten, raced back to back races last weekend starting with Barb’s Race, a half iron distance event, and finishing with the San Rafael Twilight Criterium later that SAME evening. Rachetto qualified for the Ironman World Championships last year at Ironman Lake Tahoe. She will be competing in Kona this October. Freeplay caught up with Rachetto to hear more about her win in Windsor and Vanderkitten’s win in San Rafael.

Freeplay: Congrats on your win at Barbs Race, your first win at 40, and getting one of your athletes in the podium! What were your goals and strategy for the race?
Rachetto: My first goal was to defend my title(2012, 2013 winner). Defending is never an easy feat since the competition is unknown along with my lack of specific triathlon training. I was hoping to go around 5 hours for time and start out the run with a decent lead. My strategy is always about managing my efforts and fueling properly, if either one of these is out of balance it can turn into a tough day.

Freeplay: You have been busy racing with Vanderkitten. How do you fit triathlon training into your busy race and travel schedule?
Rachetto: I have been on the road racing all over the USA and Canada for the past 7 weeks. Fortunately I have faith in my coach, Craig Upton, whom I’ve been working with for 9 years. I only have only a handful of swims and runs under my belt since January and this made me nervous. The final week of stage racing on the 7 week road trip was the most challenging for me. I was mentally done being on the road and preparing for the day to day stress of racing in the peloton. In addition to the stage races Upton had me run 4-7 miles after 4 of the stages and swim prior to the time trial. Prior to this week it was all racing or recovery focused and I stuck to the plan. Since travel can be hard on your body it’s critical not to jump into intervals or intensity the following day so I always lean to the conservative side (less is better) which has attributed to my success and ability to race hard when its “game on”.

Freeplay: After getting the overall win on a hot day in Windsor you decided to drive to San Rafael to race in the San Rafael Twilight Criterium. What made you decide to try to pull of this double? Did you do anything special to keep your body loose and ready to race again just hours later?
Rachetto: After every workout and every race I treat with a routine of- OSMO recovery drink, massage or foam rolling, good nutrition and get into dry/clean clothes. So following Barb’s Race, I did just that and also got off my feet. My plan was to go watch San Rafael Twilight Criterium- we arrived about 45 minutes prior to the start of the race as the team was setting up. Since I had incredible support from my husband and proud of the dedication of my teammates I decided that since my legs were warmed up I couldn’t sit this one out on the sidelines. Nothing special was done, but I believe all of this is due to a great support system, being relaxed and knowing you enjoy racing for fun without pressure. There is also that mental challenge of “Can I ask my body to do this?” which is 99% of the effort.

Freeplay: Vanderkitten’s Elle Anderson won the San Rafael Twilight Criterium. What was your role in helping her (your team) to this victory? How great was it to see Vanderkitten on the top step of the podium?
Rachetto: Elle Anderson is a very talented athlete, who is a true pleasure to work with a mentor in racing. When I was able to (in the criterium) I bridged up to possible solo threats that went up the road or positioned myself near the front to observe various moves, and encourage other teammates to stay near the front of the race. I wasn’t able to race quite as aggressive as normal, but sometimes just having other teammates there helps you step up your game. Since I missed attending the race the last two years, it was incredible to see Elle on the top step and a victory that I know made Vanderkitten very proud.

Freeplay: Congratulations again on your win and your team win! What’s next for you this year in both triathlon and cycling?
Rachetto: Thank you very much! In the upcoming 10 weeks I will be primarily at home or doing altitude training in Tahoe to prepare for Ironman World Championships in Kona, Hawaii. The volume of training (3 disciplines) nearly doubles, so likely my bike racing season is over and I will just be doing preparations for Kona.