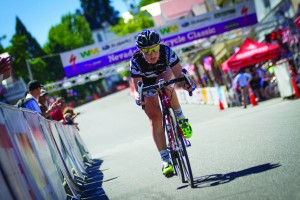 Bachochin said component manufacturer SRAM has committed to sponsor a women’s circuit race around the Capitol in Sacramento on May 11, the opening day of the eight-day, 700-mile men’s race that is sponsored by Amgen, and a time trial on the same course as the men in Folsom, Calif., the next day.

The organization expects a 60-to-80-woman professional field to compete in an hour-long race on a 1.25-mile downtown circuit, starting after the men roll out. The race also will invite 20 riders to compete in the time trial — including three who will qualify as wild cards via their placement in the circuit race. Prize money totaling $20,000 will be offered over the two days.

“It has always been our priority to create a race that promotes both men’s and women’s cycling as well as how cycling is beneficial to a well-rounded, healthy lifestyle for the entire family,” Bachochin wrote in an emailed statement to ESPN.com. “We are very pleased that with both the sponsorship commitment from SRAM and other logistical factors, we now have the ability to add a second day of women’s racing in 2014.”

The Tour of California, sponsored by the biotechnology giant Amgen, was established in 2006 and always attracts a premier men’s field. Nine Pro Tour teams have committed to this year’s race, including U.S.-licensed squads Team Garmin-Sharp, BMC Racing Team and Trek Factory Racing.

The race runs north to south this year and will end in the Los Angeles suburb of Thousand Oaks. Women competed in a separate one-day criterium in Santa Rosa, California, in the 2009 Tour of California.

For the last three years, the race organizers have assembled a small field of women for a time trial, but last year’s version was critiqued by several top women riders for its size, lack of course safety and positioning between an amateur race and the male pros.

Kristy Scrymgeour, owner and general manager of the Specialized-lululemon women’s professional team, said she welcomes the added event and will continue to lobby for an expanded women’s race to run in conjunction with the men’s in the future.

“My opinion is that every improvement they make is a step in the right direction,” said Scrymgeour, who added that having back-to-back racing days is more practical cost and logistics-wise for women’s teams that operate on modest budgets. “There are things that aren’t perfect, but we always want to support it. We know they’re really trying.”

Scrygemour said she expects to have several top American riders in the U.S. race.

“We all want to see more, but we understand it’s going to be a process,” said Robin Farina, a co-founder of the Women’s Cycling Association, an advocacy group that is working to further gender equity in the sport and promote it at the grassroots level.

The remaining seven men’s teams, along with the course details for the stage race and the women’s races, will be announced later this week.

The Tour of California is the second prominent stage race to add an event for women recently. The Today AEG Sports-owned race has a marketing partnership with Tour de France parent company Amaury Sports Organisation, which just announced it will hold a one-day women’s race in Paris on the last day of the three-week event.