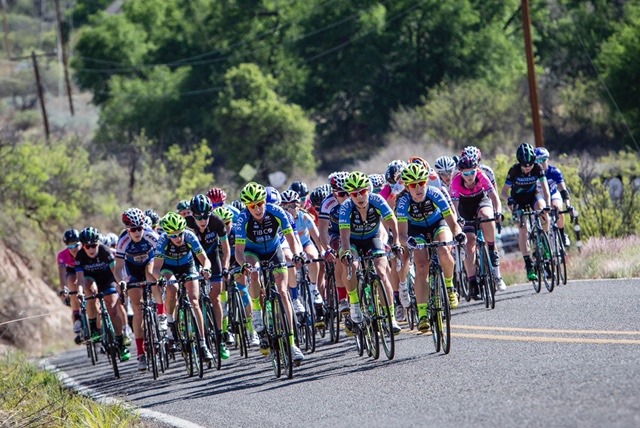 Silicon Valley, California — Team TIBCO-Silicon Valley Bank drove the final stage of the Tour of the Gila to the line Sunday despite climbs, crosswinds and determined competition.

With several teams eyeing Walle’s third-place position overall and Hall looking to move up the general classification, the Stephens-powered group whittled the 1:50 gap down to 20 seconds at the finish. The group caught Hall at the bottom of the last, steep climb about 1k from the line.

“Lauren was unbelievable. The last 15k she chased like the world was on fire,” said Ed Beamon, general manager of Team TIBCO-Silicon Valley Bank. “It was such an impressive and selfless ride.”

With a half a kilometer to go on the climb to the finish, fourth-place rider Jasmin Glaesser attacked, ultimately besting Walle for third place overall by one second, a reversal of last season between the two riders.

Overall, Beamon said Team TIBCO-Silicon Valley Bank’s performance at the Tour of the Gila was stellar considering the event is at altitude and the team isn’t built around a single climber. That said, Walle sat in third place over four stages, strategically picking off time bonuses all race.

“We don’t have an altitude climber, but the way they rode the race we were right there,” Beamon said. “To put a rider in the top five in a race like this is a testament to strong team riding and overall effort.”

Beamon said that the competitive racing every day in New Mexico sets up Team TIBCO-Silicon Valley Bank for its next big challenge — the Amgen Tour of California from May 19 through 22.

“The girls are committed to each other,” Beamon said. “Gila is a good indication that the team is prepared for California.”

Track and Field fan girls we want to hear from you! Click this link to learn how you could have a chance to be featured in our July/August issue. Fan Girl info.

Subscribe by May 22 and receive a free single serving packet of Fluid’s Cinnamon Vanilla Recovery drink with your first issue! Subscribe here.