Photos by David Darbyshire
Freeplay: Congratulations on a great start to your 2014 season with a win at the Florida Cup and a second place finish at the Carolina Cup! Looking at your race schedule I noticed that you have two triathlons on your schedule this year including your first half ironman this weekend at the Honu 70.3. You mentioned that you have wanted to do this race for a while. What made you decide that this is the year?
Kalmbach: For the past few years I have wanted to do the Honu 70.3 but the scheduling always conflicted with my SUP racing and training so I could never make it happen. This year, I had some races in April/May and the Molokai 2 Oahu in late July, so I decided to go for it! I’m excited for the experience and nervous – I have never biked over 50 miles and the farthest I have run is 6 miles, so Saturday’s race could be a long (and painful) one.

Freeplay: Training for triathlons is a time consuming endeavor by itself. How do you manage to train for both paddle boarding and triathlon in the same season? How has preparing for Honu changed your spring paddleboard training from past seasons?
Kalmbach: In the past few years I have done the Olympic distance triathlon Lavaman in Waikoloa. The race is in early April, before my SUP race season starts so I have been able to train for the triathlon and slowly add in a couple paddle sessions a week. The triathlon training really helped my SUP racing, so I’ve kept doing it. Usually after Lavaman, I back off the swim, bike, run sessions and increase the paddle sessions but with Honu I’ve had to keep up the triathlon training and back off the paddling. As soon as the race is over, it’s 100% focus on paddling and the upcoming Molokai 2 Oahu. 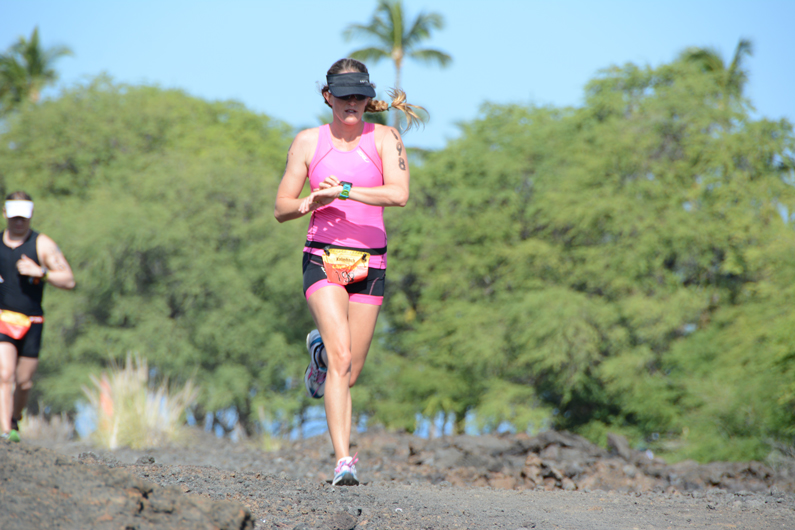 Freeplay: Maybe I should ask you this after Honu 70.3 but do you see more triathlons in your future?
Kalmbach: I really enjoy training for and competing in triathlons so I would like to do more in the future, but I will probably stick to the shorter distances. Honu is a different beast and I haven’t trained as much as should have or would have liked to but as I say, it is what it is. Just don’t expect to see me toeing the line at IM Kona, ever.

Freeplay: You have three big SUP races later this summer and fall including Battle of the Paddle and Molokai to Oahu. These are two totally different events. Which style of racing is your favorite and how will your training change as you prepare for Battle of the Paddle race in October?
Kalmbach: It’s hard to choose a favorite style of racing, as you said they are so different. Molokai 2 Oahu is an ultra-endurance, channel-crossing race and Battle of the Paddle is a short distance, intense, course race in and out of the surf. They are both special races and I enjoy preparing for both of them although BOP training is probably a little bit more enjoyable since the paddle sessions are shorter and I can take my race board into the surf and call it training!

Freeplay: As you are adding triathlons to your season many triathletes have begun to take up paddle boarding. What tips do you have for triathletes looking start racing SUP events?
Kalmbach: Find the right equipment, boards and paddles can make a big difference so head to a local shop and get fitted! Choose a local race and train for it accordingly. When it comes to race day, don’t hold back at the start. It’s hard to catch up if you fall behind, so make sure you have a strong start, go out hard and settle into a comfortable rhythm. Most importantly, have fun!