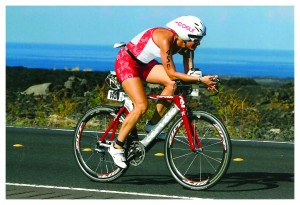 Kebby Holden wants you to stand out and stand tall in your triathlon, cycling, swimming, and running gear. She started Coeur Sports, an edgy endurance sports clothing company, to help women look good and feel confident in sport. Even though “coeur” means “heart” in French, you won’t find any pink hearts or butterflies floating around in her designs. Instead, Holden explains Coeur’s fashion as a mix of “east coast preppy” and “west coast chill.” With clean lines and contemporary designs, Coeur Sports blends function and fashion into each piece of clothing and gear.

Holden started Coeur Sports after spending years racing triathlon in boring and uncomfortable tri suits. With no formal training in clothing design, she used her experience as an athlete to design clothes that actually fit and made her feel confident. With pockets in the right places and tops that won’t ride halfway up your torso, Coeur Sports is devoted to making women look and feel great. But not only does Coeur Sports make you feel good on the outside, their support of the Challenged Athlete Foundation (CAF) will keep you happy on the inside as well. As a way to give back to the endurance sports community, Coeur Sports donates 1% of sales to CAF, helping provide opportunities and support to athletes with disabilities.

In the search for fashionable, functional, and fun endurance sports clothes, check out Coeur Sports for a little inspiration and enthusiasm in being a woman and being awesome.

Freeplay – How did you get involved in triathlon and endurance sports?
Kebby – I heard of a girl who did triathlons in college and thought that was so badass! I really wanted to do one but was too chicken to sign up for one on my own. Then, I started a project at work and soon developed a crush on a cute guy. Turns out he had JUST done his first tri. He invited me on a bike ride and of course I said yes…although I hadn’t ridden a bike since I was a kid. He hooked me up with a ride and I refused to wear bike shorts because I thought they were super-dorky. Ha! Well, long story short, this guy and I started doing more and more training together and he signed us up for a race together. That was 10 years ago, the rest is history, and the boy is now my hubs and partner in crime, Reg.

Freeplay – What is the most unflattering piece of sports clothing you’ve ever worn?
Kebby – The worst piece of clothing was a ¾ length tank with an elastic bottom that pinched in right above where the elastic waistband of my shorts pinched in creating a sweet little muffin top. I knew it was bad but I had a hard time finding anything made without elastic pinching in conspicuous places.

Freeplay – Describe “East Coast preppy meets West Cost chill”
Kebby – I’m originally an East Coaster and a Southerner that grew up playing tennis so I like a cute matching preppy outfit. But I am so influenced by all the outdoor activities, the elements and the nature that is such a part of So Cal.

Freeplay – What colors do you like to design with the best?
Kebby – I LOVE them all! Believe me, there aren’t enough garments in the world to account for all the colors and designs I want to use.

Freeplay – What are the biggest changes you’ve noticed in women’s triathlon?
Kebby – It has to be the sheer numbers of women getting into the sport and really, all endurance sports. It’s so awesome. And I love that our sport typically has equal pay for both male and female pros.

Freeplay – Are there any changes you’d like to see in triathlon? 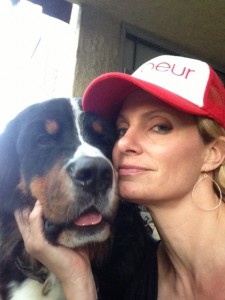 Kebby – I’d like to see a lot more changes come along: i.e. daycare at races so parents don’t have to rush off after the end of a race; fairer slot distributions at Ironman races (it drives me nuts when a girl has a faster time than a guy in the same age group and he gets a slot and she doesn’t. Yes, this happens. Girls on the podium often don’t get a slot where men off the podium often do), as well as something as minor better women’s specific finishers tees at races!

Freeplay – Why do you think style is important in racing and training?
Kebby – Well, let’s be honest…as girls, who doesn’t like a good outfit? Why limit it to the workplace or on a date? Most of us gals are working out every day and sometimes multiple times a day so we need multiple outfits. Black shorts alone get boring. I love the idea of women being strong, sweaty, fast AND stylish. I don’t think those these things are mutually exclusive.

Freeplay – What clothing issues have you experienced before Coeur Sports?
Kebby – One I have is probably a story a LOT of women have had a problem with. Racing Kona my first time, my tank was so short that it rode up about three inches above my shorts when I was in my aerobars so I got a solid Hawaiian sunburn racing stripe on my lower back. It’s issues and experiences like these that I’ve had as an athlete that led us at Coeur to do things like lower and flare the hem of our tanks so they don’t ride up went when we’re bent over on the bike.

Freeplay – What is the most important thing you want to do or pass along to the women’s endurance sports community?
Kebby – I love this question! While it is certainly a goal to have all women outfitted in our gear so they will be comfy and fast while training and racing, we actually have even bigger aspirations at Coeur. We want to build a real sense of community, fun and excitement around endurance sports. We want to get people who were like me, chicken to sign up for that first race, out the door and on the start line. We have a team of gals across the country, in Canada, Europe and Australia that have been tasked with being ambassadors not just for our brand but for women in the sport. We have mom’s, grandmom’s, lawyers, doctors, cancer survivors and all sorts of role models proving there is no excuse not to get involved in sport and live healthy.

Freeplay – Why did you decide to donate part of your sales the Challenged Athlete Foundation?
Kebby – When my husband and I lived in San Diego, I was fortunate enough to volunteer at CAF… Donating to CAF is our small way of giving back to a tremendous organization that actually enables these incredible athletes to have a chance to compete and perform that they wouldn’t have otherwise. We felt it was the right thing to do. But more than that, at Coeur we believe in the concept of Conscious Capitalism. This is the notion that while making money is a function of a successful business, it isn’t the be all and end all.