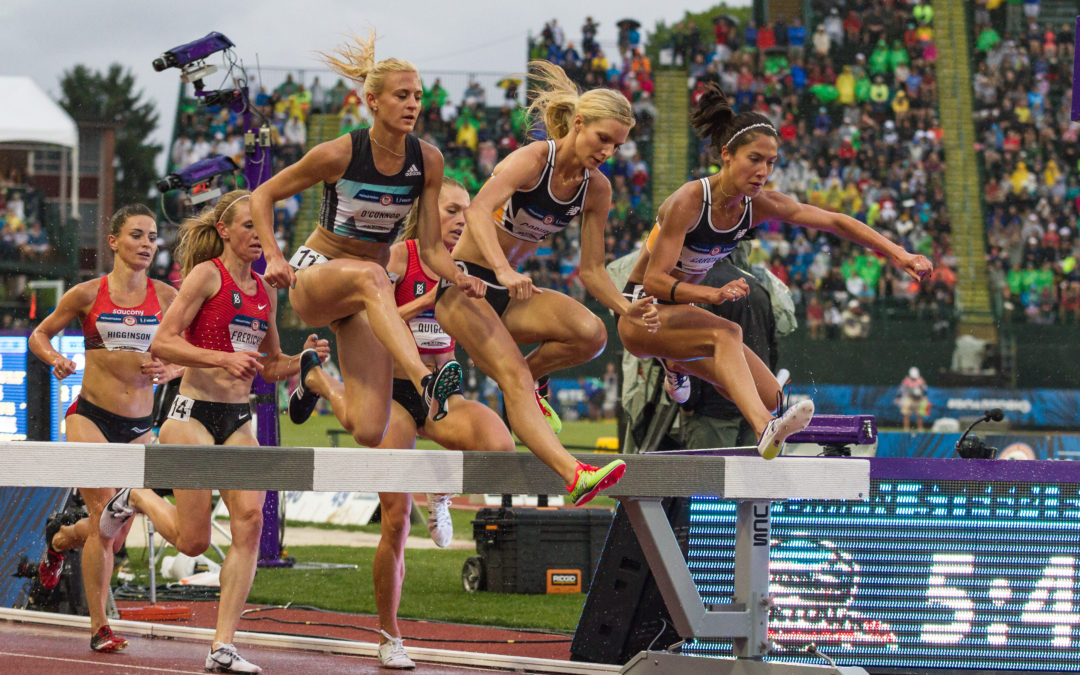 The women’s steeple final. The bell rings out. Emma Coburn glides away, seemingly so effortless. She’s barely opening her mouth to breath. Then the cameras cut back to Stephanie Garcia, who had led the first half of the race and is now in second. Her eyes are lit up.

Not like in the final in 2012. “I wasn’t even involved in the race at all. It was so disappointing because I knew I had more potential than that,” stated Garcia.

By 2013 she had to answer a big question, was she all in or all out on that life? She had made the world team in 2011, and run some big races, but she still didn’t feel like she was where she needed to be. She wasn’t running to her potential. 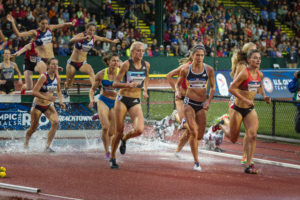 “Yeah at end of that year I said I’m not going to do this if I’m barely making it into a final at USAs. I felt like there was no point to continue if I wasn’t a success. And I just wasn’t in the right place. I needed to make a huge life change and recommit myself to being an athlete.

I came down to South Carolina to run with the Furman elite and it did more than revitalize my career, it gave me my career.”

And since that move, Stephanie’s career has indeed taken off. Leading up to the Olympic Trials this year she’d run the A standard in the 5,000, 1,500 and Steeple. She’s was the only woman in the Steeple to have all three A standards. She was fitter and stronger than ever before, despite a rocky Steeple opener in Stockholm in June, she knew she had more than a chance to make the Olympic Team.

What has changed in the past fours years besides Stephanie’s PRs and commitment is the event itself.

The field this year was 12 women deeper than in 2012. The times are dropping. You have to remember this is only the third time the Women’s Steeple is an Olympic event. In 2012 only one or two women even entered with the A standard. Emma Coburn won the Trials in 9:32. This year that time would have placed 6th.

You don’t have to tell Stephanie that. She knew as she approached the Trials that she was fit and ready, but that the field was stacked. A few days before leaving for Eugene, she had an epiphany.

“What if I could see the future and I knew I wasn’t going to make [the Olympic Team]. What would I do? Would I just sit back in the race and just it in? Or would I race my heart out and make the girls who do make the team have to run the best they’ve ever run?” 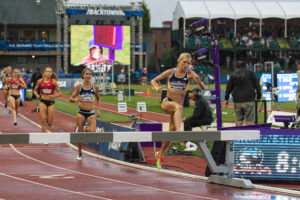 Back to Track Town 2016. The bell lap is on. You can see as Emma pulls away, that Stephanie is at the bottom ofher well and she’s digging for another level. Grasping for another gear. Her eyes are on fire. And as she hits the final backstretch, she so quickly (almost undetectable), looks at the big screen. Does she see the two red uniforms syncing up to hunt her down? She scrambles for that next gear as they gain.

The final water jump is hard on her. The two women pull past her. And even as I watch this race a fourth time, I am cheering for Stephanie to pull them back in. But she’s gone to the bottom of the well. Exhaustion and emotion spill over, and she trips on the last barrier. Skidding to the track. And as the cameras cut to Emma she pulls herself up to finish her race. She pushes hard to the finish as Shalaya Kipp barely nudges her out for fourth.

And then the cameras focus on Stephanie, and her eyes are clear and dry. There are no fists beating the track, no anger, no bitter tears. She stands tall as she congratulates her teammate Emma and the women who are being handed American flags. When you watch Stephanie in that moment it’s clear that race was just one chapter in a book worth writing. And a book certainly worth reading.