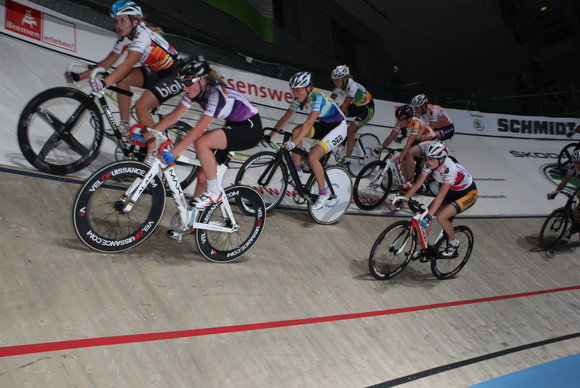 Increased women’s participation by 50% : Six Days of Bremen is a pioneer.

While arguing about politics , when and how the women’s quota is to be introduced , which is already implemented in the 51st Bremen Six Days from 9 to 13 January 2015 . Here, the quota for the women’s race was immediately increased by 50 percent. Instead of 12 as in previous years Radamazonen start time in the three blocks race on Saturday and Sunday equal to 18 young ladies.

This was made possible both by the approval of the UIV . On the other hand but also because of the Bremen Hochstufung race to Category 1. ” We have women’s race now for the fourth time in the program and it will be very well received by the audience. We give them the race in Bremen one more chance to show their skills in front of a large audience . And it’s all for all and for anything, ” says sports director Erik Weispfennig .

In fact : It’s first time this year to important points for participation in World Cup races . No wonder the ladies about tore to get one of the coveted starting places for the competition in Bremen. About 25 messages were not the sporting director before that had to decide who he wanted it and from whom .

Erik Weispfennig has chosen a very mixed , but balanced field . In addition to the three winners of the past three years old – Julie Leth of Denmark (2014 ) , Kelly Markus from the Netherlands ( 2013) and Daniela Gass from Germany (2012 ) – he still has strong international and experienced riders like Alzbeta Pavlenkova from Slovenia , Kornia Huizar committed from the US, Hannah Walker from the UK or Martina Ruzickova from the Czech Republic . In addition a number of hopeful young German riders from the various cadres of the Federal German Cyclists ( BDR ) .

The program of the ladies to bring about ends meet they will host their competitions in three blocks. You go on Saturday morning ( KidsDay ) , on Saturday evening and on Sunday at the clock , 17 against the great presentation ceremony will take place. Who then stands on the podium at the top is completely open. Almost half of the drivers has the potential for a win in Bremen.

You can read about Korina Huizar’s experiences in the Bremen Sixdays in the Korina Diaries starting here.