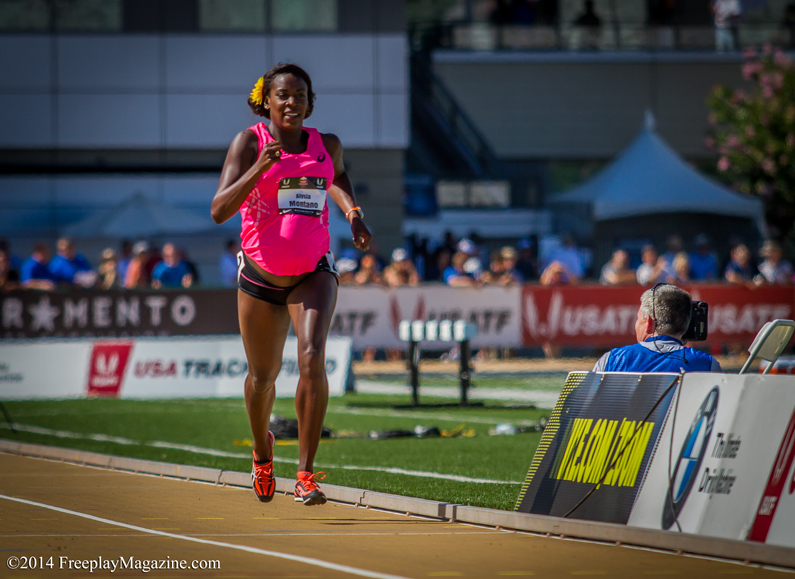 Alysia Montano, the four-time defending 800m champ, wasn’t expected to compete today. Not because of an injury, but because she’s expecting. The American record holder in the event is 30 weeks pregnant.

That didn’t stop her though.

The soon-to-be-mom took the track to the biggest cheers from the crowd – even as she lost by almost 200m to competitors she’d normally be in the mix with. Her time (2:32) was significantly slower than her 2013 title win in 1:58 and was much slower than the winning preliminary times this year. Oregon runner Laura Roesler ran the fastest time of the day in 2:01.64, followed by Molly Beckwith (2:01.81), Brenda Martinez (2:01.83) and Maggie Vessey(2:01.87). But, Montano’s 2:32 still inspired a number of jokes from spectators that they couldn’t run a 2:32 even without the giant belly. And, it simply inspired a number of women.

Montano said she was just excited to be there and wanted to enjoy the national championship atmosphere, without expectations.
“I just didn’t want to get lapped, be the first person ever lapped in an 800m,” she joked after the race.

The effort prompted concern about her and the baby’s health, even as she looked to be unfazed by the run and waved joyously to the crowd at the finish line. In fact, she was whisked into the medical tent by USATF officials to be checked out by doctors immediately after finishing. But, Montano told reporters that she had been running regularly throughout her pregnancy and her doctor had assured her running the two laps wouldn’t pose a problem.

Elite female athletes racing while pregnant is not without precedent, but doing so at the national championships may be. For pregnant moms, the important thing is not to overdo it compared with their usual level of activity and heart rate. For these top runners, their usual is so much higher than normal that they can put out a 2:32 800m effort without it being dangerous.

Montano has also made it clear that she plans to bounce back after the birth of her first child. That requires staying fit throughout the nine months and hard work in the comeback period. Expect her to be at the national championships next year too – but running much faster.