After an aborted start to the first heat – when the women were brought out and then told to wait while the men’s decathlon took the track – the women’s 1500m prelims plowed through the hot wind on Friday night. Veterans Morgan Uceny and Jenny Simpson won their respective heats to advance in 4:09.74 and 4:08.36, respectively, but all eyes were on two high schoolers – one who will move on to the finals on Sunday afternoon and one who will not.

Mary Cain, the 18-year-old track star who has set 800m, 1500m, mile and two mile junior records, took third in the second heat in 4:09.08 behind Simpson and Stephanie Charnigo. For someone who only recently celebrated high school graduation and just began her true professional career under coach Alberto Salazar, Cain displayed her usual low-key optimism after the race.

“I felt pretty good,” said Cain. But, she said, her focus is on building fitness and peaking for international races later in August.

The other high school runner in the 1500m prelim struggled on the big stage, but has years ahead of her. Alexa Efraimson, who broke Cain’s high school two-mile earlier this spring, faced off with Cain and Simpson in the second heat. She raced at the front of the pack, but faded abruptly in the last 300 meters and was escorted immediately to the medical tent after. Only a junior in high school, Efraimson has said she may go pro in her senior year and follow in Cain’s footsteps.

Both the young girls got cheers from the crowds, but the cheers might have been loudest from one section of the stadium.

Kate Grace, who took fourth in 4:09.55, said her Oiselle cheering squad could be heard from the track, helping to propel all the girls – but especially Grace, who leaned across the line for the last automatic qualifying spot.

“They [the Oiselle staff and support] really are just such huge track fans,” said Grace. “They were here going balls wild for the 10K last night, for Kim. It’s awesome to have that around. It makes my experience, our experience, so much more fun.”

The first heat of the prelims was “really physical,” said Uceny, because people were anxious to go after the decathlon delay and “emotions are high, it’s a championship race.” But, the second heat proceeded with relatively little excitement. Simpson led from the beginning, with Cain right on her heels the whole way. The veteran runners have come to respect the young phenom for her talent and hard work.

“When I was in high school, I had no connection to how other people were doing in the country,” said Simpson. There was no twitter; DyeStat was in its infancy. And, besides, she joked, even if she had known that there were faster girls on the other side of the country, “I can’t imagine having wanted to be that dedicated at that age.” 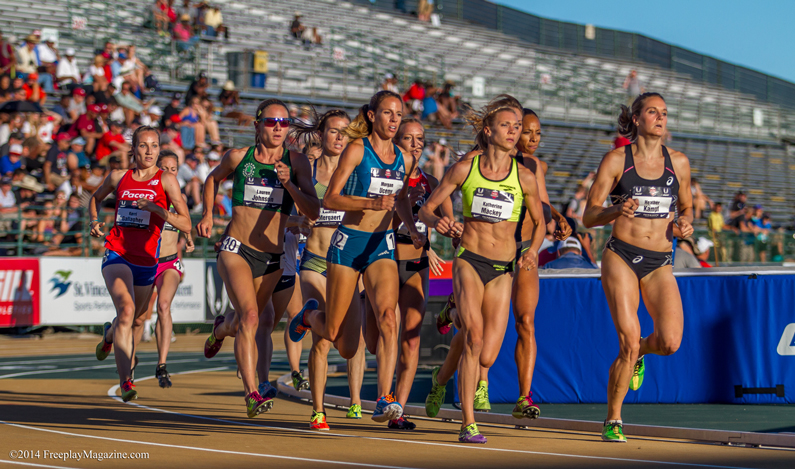