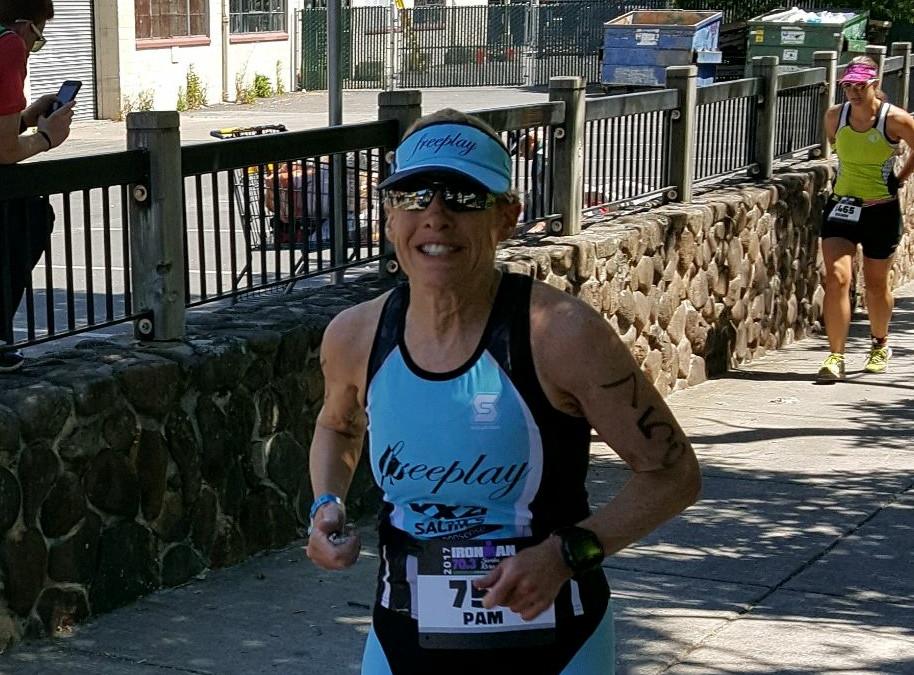 The inaugural Ironman Santa Rosa 70.3 (replacing the old Vineman course after it was sold to the Ironman brand) was declared the largest Ironman 70.3 race in North America. Any race staged in one of northern California’s premier wine regions is going to become a popular destination event. Heck, what better way to celebrate a finish than with award-winning wines?

The swim, which used to be in the Russian River, was moved to Lake Sonoma. It’s a nice lake for a course, although unusually windy conditions prompted race organizers to alter the course the day before to provide a bit of protection from projected chop. 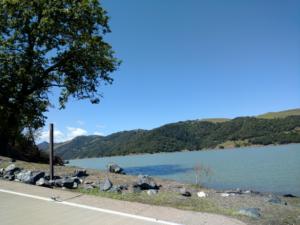 This was the direction we were supposed to swim until the course was changed the day before.

I liked the change because we swam under a bridge. I have a fascination with bridges, and just think it’s kind of cool to swim under them. The air temperature was about 44 degrees at the start. My swim time was not quite what I expected, but I still felt good, although I was glad it was only 1.2 miles as I did start to get a bit cold.

So let’s talk about Transition 1, just because everyone was talking about it before the race. Exiting the water, not only did we get the cold air, but got to run about a quarter mile up a steep boat ramp. Definitely a way to get the heart rate up! 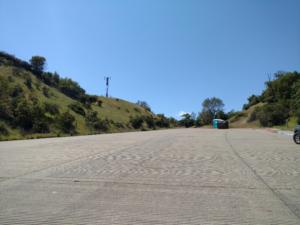 Nothing like a good hill to run right out of the water!

I opted to run up without starting to strip the wetsuit, as that Neoprene was keeping me warm (relatively speaking!). Finally, with feet painful from the cold and asphalt (how I wish I’d left cheap slip-on shoes like some others did), I made it to my bike. I started layering up for the ride, which ended up taking me way too long. I’m pretty sure I had one of the slowest T1 times, dang it!

The bike starts with about a two-mile winding descent. The descent was declared a no-aerobars section. Right away we got to enjoy the beautiful landscape that surrounds the region. 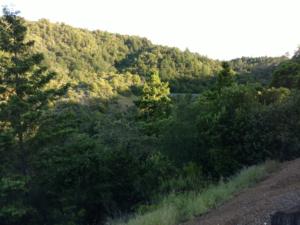 Then off to the rollers that are the signature of any Sonoma County ride. Advertised as about 2,200 feet of climbing, it’s not an overly difficult course if you’ve trained properly. Some of the roads had potholes and cracks (lots of online discussion of this preceding the race), but most riders dealt with it safely. We had some spectacular views through the vineyards and past rural homes. We got to experience some headwind, crosswind, and tailwind (yay for tailwind!), although none of it was very strong. However, about halfway into the course, a wind gust caught a large palm tree branch and whooshed it directly into the front wheel of a gal just ahead of me. She did what she could to try and save herself, but ended up going over. Thankfully, she was not hurt seriously. What a random occurrence! Overall, I liked this bike course, although some road repair would be nice. I felt good about my ride; training camp and winter trainer rides had paid off. I wasn’t the fastest out there, but it keeps improving; I think it was one of my strongest rides to date.

Into Transition 2, my bike had been assigned a slot fairly close to the run-out exit. It was about four rows of close to 3,000 bikes, so it was a ridiculously long run on my bike cleats. Either I learn to leave them on the bike, or just take them off and run with them next time. My time to get out of T2 wasn’t super fast, but not as horrendous as T1.

The run is pretty flat, going along some easily runnable gravel sections, but mostly on asphalt on a narrow bike path. There are lots of turns and a couple of loop-de-loops. With so many people, it took some communicating to let people know I was passing on their right or left. I liked the course, but I hope they don’t increase field size or else it will be too crowded.

A rare smile from me during the run. More work still lay ahead!

There’s nothing like crossing the finish line, no matter how many times it’s happened in the past. I knew I’d caught some women in my age group on the run, but was not fast enough to grab a spot on the podium. I was sixth place to my friend Karyn’s fifth place. It was more than double the largest field in my age group of the six 70.3 races I’ve done, and the women who finished ahead of me are experienced and talented triathletes, so I’m happy about how I placed.

I stayed for the 70.3 World Championship slots to be awarded. Two of the 50 slots were allocated to my age group. The names of first, second, third, and fourth were called, and none of them stepped forward. My friend Karyn had said she’d have to pass on it due to her work schedule. My name was the next to be called and I hesitated enough that they moved on to the next name (which was my new friend and fierce competitor Brenda, who accepted the second slot offered). Thinking that I might regret the chance, I headed to the stage and accepted the slot. In exchange for the chuck of change we had to pay right on the spot, we were handed these cool coins from pro Andy Potts, who is always a class act. What a way a way to end the day! 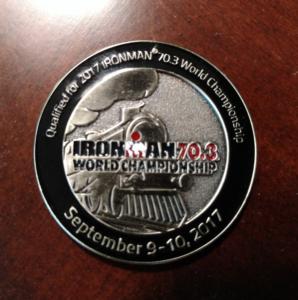 The highest-value coin I’ve ever held.

This is a race I would do again, although next time it’s going to be a T1 PR!