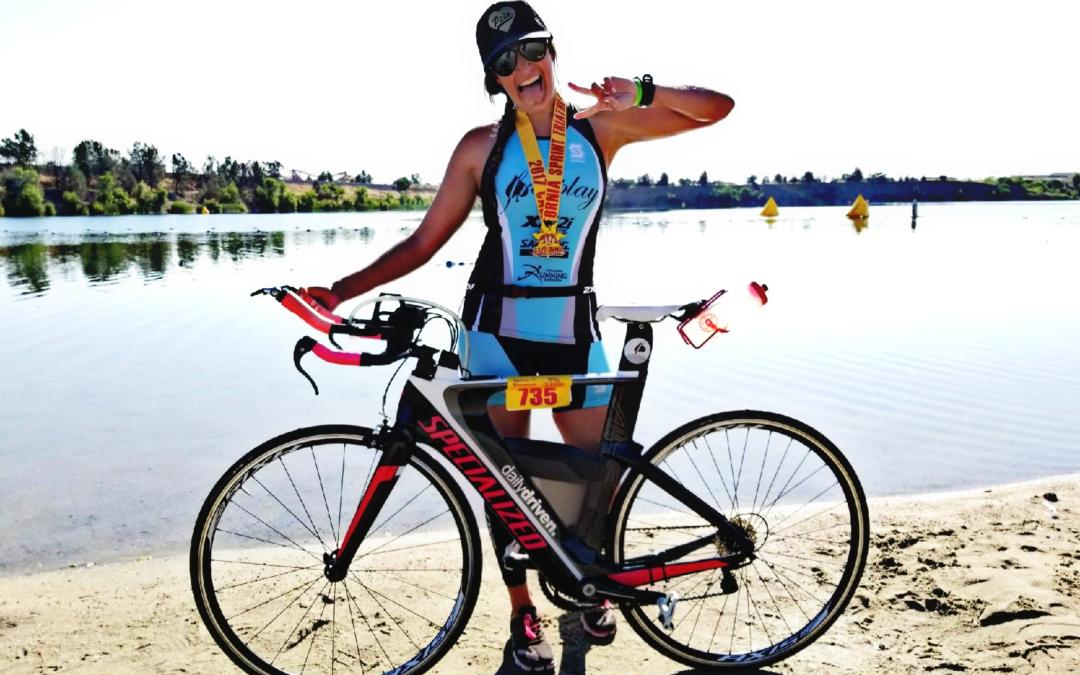 Nothing like a 2am wake-up call on race day! Especially when you only got a solid 3-4 hours of sleep. Gets me every time. Every. Time. Sometimes I nail the sleep before race day – those “sometimes” are rare this season. Obviously chronic pain has something to do with that – it just comes with the territory. Had to be out the door around 3am to make it to the race venue in Pleasanton by 5am when registration and transition opened. I drove my fiancé and myself so that he could get some extra snooze time – it’s the least I can do since he is always at every race supporting me while I chase my dreams.

When we arrived I was hurting. Fatigue was high, head was pounding, and pain was high – especially in my back. The sun was just starting to rise and the temperature was lovely – not too cold and not too warm. I spent extra time stretching and listening to my body and giving it what it needed – physically, and mentally too. Before and during races I do a lot of talking to myself in my head – encouraging myself, reassuring myself, motivating myself. Some races I rely more heavily on the mental pep talk than others – this was one of those races.

My wave start was 6:53am, so I made way into the water about 10 mins before that. It’s always important for me to get in the water and get acclimated and comfortable before my wave. Easier on my body that way, plus I swim better because I don’t feel so anxious (breathing is more controlled). The water was perfect – warm (my body likes that). So warm that I regretted wearing my wetsuit a little bit, because I could’ve cut down T1 time struggling to get that darn wetsuit off.

As I was swimming around a bit getting warmed up, I looked back at the shore and was stunned to see that it was covered by triathletes. Then the race director got on the megaphone explaining that the race start was being delayed because so many triathletes were still trying to get into the venue. I’ve done this race 3 years in a row and have never seen that many people racing it. I opted to stay in the water until race start – which actually ended up being pushed back about 10-15 mins or so.

So I swam around and waded in the water longer than my actual swim course race. Probably wasted some energy, but oh well. Felt damn good during the swim, minimal contact with other swimmers, sighting was on point. Overall I just felt good, and strong. As I ran out of the water I checked my time and suddenly realized why I was feeling so good – because I was swimming SLOW. “Awesome. Nailed it Dina.” The good news was, my body wasn’t very angry with me yet. With my slow swim time getting under my skin, I was beyond ready to crush the bike leg.

The bike course starts on an immediate steep climb out of T1. BAM. Climb this hill NOW. There’s also not a lot of space for mounting bikes, so it can be quite chaotic. I was so focused on getting out of the danger zone that I thought I had clipped in both of my pedals. As I started to climb one of my feet slipped and obviously was not clipped in. Not ideal when on a steep hill from a dead stop. “Please don’t roll backwards, please don’t roll backwards.” I quickly realized I was not in a climbing gear, for funsies. Because you know, that would have been way too easy.

Obscenities poured from my mouth as I climbed. Wrist pain, hamstring cramp. “Push those pedals faster.” Hip pain, back pain. “Dig Deep inside. Fight for it.” Averaged about 19mph, so it was worth it (as it ALWAYS is). Mentally I was feeling incredible. I killed that bike course and totally surprised myself. “YES, I got this!” Kept that positivity up in T2, and headed out on the run. My first thought was, “Sweet, it’s not triple digits! Thank you triathlon God’s.” My body wasn’t as angry as I had expected it to be. A bit past the mile marker my second thought was, “I’m actually feeling pretty good, time to pick up the pace!” Almost instantaneously I rolled my ankle. “Well. There goes that.” And again with the hamstring cramp when I was attempting to empty the tank. Apparently my bodies tank was already empty.

Crossed that finish line and made my way straight to the med tent (per usual) – mostly for my rolled ankle. Each time I cross a finish line, no matter what kind of race I had (good or bad), the full weight of what my body had actually been feeling hits me like a ton of bricks. It speaks volumes to the power of mind over matter – and furthermore, what we can truly endure despite the odds.

Somehow, I PR’d my overall course time and earned 6th place AG in a very competitive field. My PR was a minute faster than last year’s. (To put it into perspective – competitive field, meaning that last year I took 3rd in my AG and was a minute slower than I was this year.) This may not sound like much for the average triathlete, but for ME this is a hard fought for accomplishment. This year, my training and racing is nowhere near the level it was last year – due to my health (autoimmune disease, chronic illness, other chronic conditions, etc). I’ve accepted that, but am still fighting. Neither are easy, but I’m letting it be enough. So to be in my shoes that day, and do what I was able to do filled me with incredible strength and restored much needed belief in myself. It’s enough – powerfully enough.

As always, a huge THANK YOU to my incredible sponsors, for their undying support and belief in me: Hammer Nutrition, Rudy Project, Love The Pain, Kinetic Cycles, and Team Freeplay.