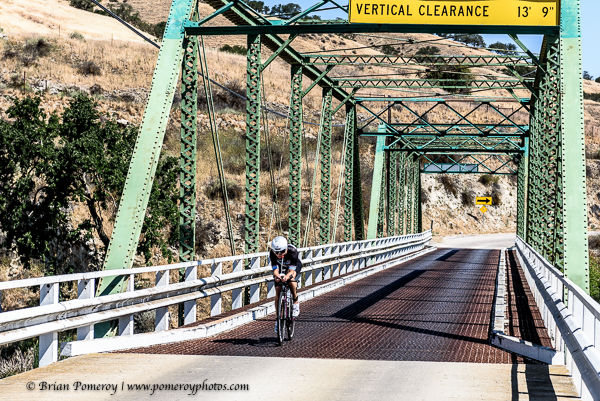 At a successful 2014 triathlon season which included the overall amateur win at Lifetime Fitness Oceanside and 2nd overall at the ITU Age Group World Championships, Robin Pomeroy decided to race pro in 2015. With limited non-draft Olympic distance race options available to professional triathletes Pomeroy ‘s decision to race pro also meant she needed to move up to the half IM distance events. In her rookie season (2015) she finished 4th at Challenge Ixtapa, 5th at Tri Rock Philly, 6th at Ironman Calgary 70.3. Last weekend Pomeroy showed us she is ready for the 2016 season with her 4th place at Wildflower Long Course.

We caught up with Robin to talk training, racing and what she learned as a rookie pro.

Congratulations on placing top 4 at Tri-California Events Wildflower Long course Triathlon!  Last year Wildflower was your first pro race and your first half Ironman distance event. What did you learn from last year that helped you get to the line 4th this year?

Thank you Stephanie! I am just so happy that I didn’t go into this race as my first pro and first half Ironman distance race again! I had a bit more of an idea of what to expect. Nutrition and pacing were the biggest things that I learned from last year during Wildflower (as well as my other half distance races). This year I focused on getting in proper fuel and hydration the week before the race, as well as during the race itself. Last year, the run was half walking for me because I totally screwed up my nutrition. This year it was spot on and I felt a “normal” tired on the run. I am thankful to have Sheila Leard and Stacy Sims working with me on this – it has made a world of difference! 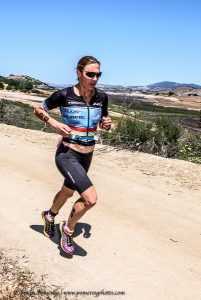 Wildflower is known as a tough course – hilly, windy, trails….What was your strategy on the bike to to ensure you could close the race with a strong run?

Patience! And a consistent but hard effort. My effort was very consistent throughout the race and I didn’t burn too many matches on the hills. I was very steady and took each mile and hill at a time. It was hard to gauge where I was at in the field because the roads are curvy and it’s not easy to see far ahead. So it is just you and your mind unless there is someone within striking distance. With the leaders several minutes up the road, I didn’t have any clue where I was at. Last year, I was maybe too aggressive for the first 35 miles on the bike (remember.. I was used to racing the Olympic!), so was maybe a little too conservative on the bike this year, but I held together strong on the run. I will be curious what I can do on the run next year with pushing the bike a bit harder.

You are a full-time professional triathlete and part-time biomechanist at Shriners Hospital for Children. What are the pros and cons of balancing two careers?

Well, it’s actually part-time at both! At the moment, I LOVE racing professionally and doing my work at Shriners. They keep me balanced. At Shriners, I am able to use my degree that I worked so hard for in school and it keeps me more mentally stimulated and motivated than if I only trained and raced. Both have become outlets for one other and I have developed a nice rhythm to fit each in well. Competing and holding another job has its challenges for sure, but right now I am enjoying the two and wouldn’t change what I have (minus my commute to work!). However, these 2 things occupy my time more than I wish so I have less time for traveling and other hobbies. My husband and I enjoy adventures and we have done less of these since I started racing professionally. We do what we can, but some adventures will just have to wait. Another con is that by balancing both, I am prevented from fully exceling at just one of them – whether it be my career as an athlete or my career as a biomechanist. I am working hard at both of these to the best that my time and mental/physical energy will allow; however, there definitely has to be some give and take.

2016 has gotten off to a good start for you with strong races at the Texas 70.3 and here at Wildflower. Anything particular that you attribute your strong start to the season with?

The main thing is nutrition. I struggled last year with figuring out nutrition for the longer distance because I really didn’t have to worry about it as much during an Olympic distance. I have Celiac Disease, which makes my gut more sensitive and less able to process fuel compared to other athletes with a more normal gut. For Texas 70.3 and Wildflower, my nutrition was spot on, which is a far cry from where I was last year!

Base building and pacing strategies have also been key elements this year. When I turned pro last year, my plan was to race the Olympic distance and maybe race a half, so I structured my whole season with those intentions. It wasn’t until March/April that the Olympic distance races basically disappeared. After that, my coach and I tried to re-structure, but it was a difficult process for me, and I ended up struggling. Now I am focused on the half distance and actually really enjoy it!

What was the most important thing you learned from your rookie season last year and what
advice do you have to first year pros this year?

Patience! It takes time to develop an athlete. Some of the best female endurance athletes right now are in their late 30s/early 40s (the podium at WF is a perfect example). This just goes to show how long it takes to fully develop, and that women in particular have the potential to peak later. Knowing this is encouraging and allows me to be patient with myself as I slowly develop into an endurance athlete. I do not have the mindset of “going all in” because that has gotten me in trouble in the past. I want to be competing to some degree the rest of my life, and have a healthy, able body to do so.

Is your main focus this season half Ironmans or are you still planning on mixing some Olympic distance events into your schedule? Where can we expect to see you racing next?

My main focus will be the half Ironman distance, but I am planning at least one Olympic distance race – Rev3 Knoxville later this month! I am excited that Rev3 is working hard to bring back some Olympic distance races in the pro circuit so it will be fun to compete there. But I am not focusing on that distance like I was last year.

Next article: On the Treadmill with Kelly Booth.