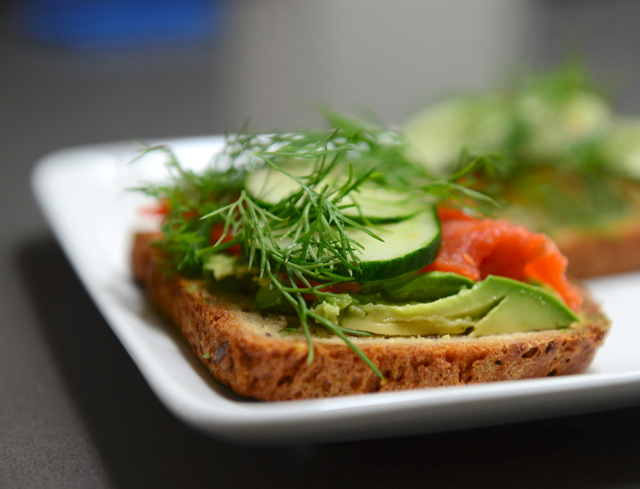 Last summer I traveled to Haugesund, Norway for the Norway 70.3 triathlon. Although the trip was for business (collecting Kona points), I did my best to take in as much as I could in the few short days I was there. Most of my sightseeing was done during the 56 mile bike leg of the race. The scenery was stunning with winding roads and views of fjords around every corner. Even though we were way out in the countryside, there were local fans at top of every rise, cheering on everyone who rode by. It was cold and rainy, so the fans were bundled up in parkas and gloves. I stuck out as the crazy American racing in a bathing suit! Even though it was mid-July, this was not beach weather.
As for the food, everywhere I went, I saw open faced smoked fish sandwiches. I even had one  the night before the race…and then the next morning I ran my fastest ever half marathon split. Since then, I’ve been fueling with my own version of a Norwegian salmon sandwich, in hopes that it will power me to another top finish when Laurel and I both race in Norway this July.
-Rebeccah Wassner
Open-Faced Salmon Avocado Sandwich
Ingredients:
2 slices multi-grain bread
1/2 avocado, sliced
2-3 slices of smoked salmon
sliced cucumber
fresh dill
How to Assemble:
Layer avocado slices on bread and mash down with a fork,
Top with a few slices of smoked salmon, a few slices of cucumber and some fresh dill.
Finish with a few grinds of pepper.
*This piece originally appeared in the July/August 2015 issue of Freeplay magazine.