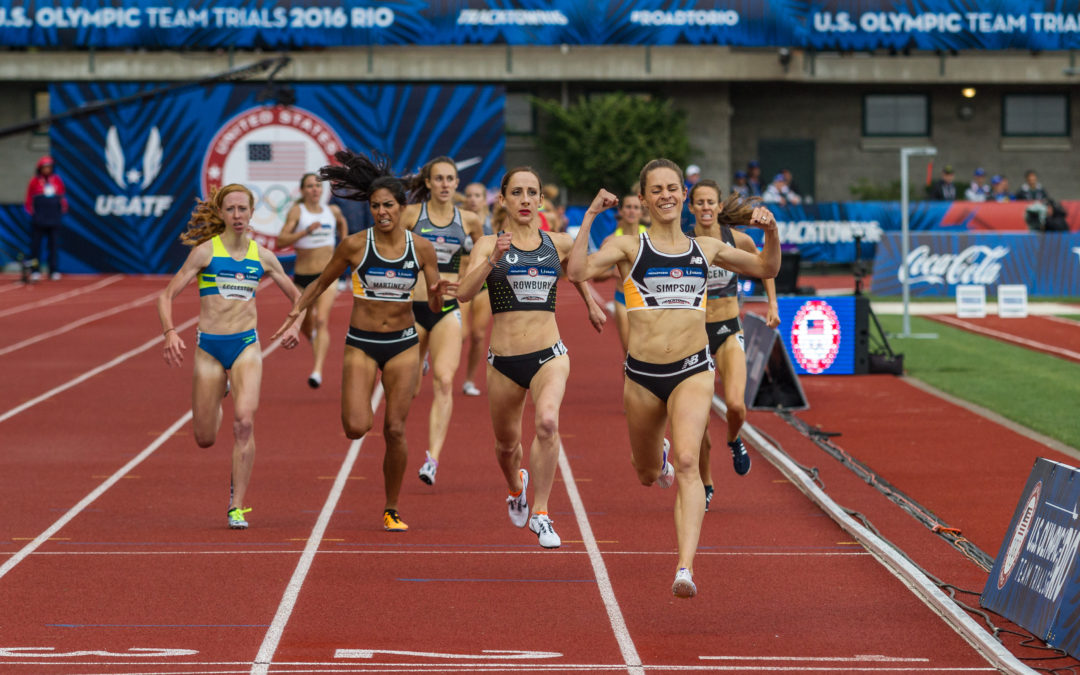 The most iconic road mile race in the world will return to New York City’s most prestigious thoroughfare for its 26th running on Saturday, September 3, with Team New Balance Olympians Jenny Simpson and Emma Coburn set to lead the way at the New Balance 5th Avenue Mile, it was announced today by New York Road Runners.

“Bringing in professional athletes such as Jenny and Emma – both Team New Balance Olympians – to race a historic 20-block stretch of New York City is a terrific way to kick off the inaugural New Balance 5th Avenue Mile,” said Peter Ciaccia, president of events for New York Road Runners and race director of the TCS New York City Marathon. “New York Road Runners and New Balance share a powerful commitment to helping athletes and giving back to the communities they are a part of, and we are excited to partner with USATF.tv to ensure fans everywhere will have the chance to watch the New Balance 5th Avenue Mile.”

Simpson, 29, of Boulder, CO, is the only four-time women’s champion of the 5th Avenue Mile, and has won the event each of the last three years. The New Balance athlete is a two-time IAAF World Championship medalist over 1500 meters, and earlier this month she finished first in the distance at the U.S. Olympic Team Trials to qualify for her third Olympic Games. Before shifting to the 1500 meters, Simpson was the American record-holder in the 3000-meter steeplechase, placing ninth in that event at the 2008 Beijing Olympics.

“For the sixth year in a row, the finishing stretch of my summer season will be the New Balance 5th Avenue Mile,” Simpson said. “I can’t wait to return to the most iconic road mile in the world to try to take home my fifth title. There’s nothing in our sport that quite compares to the electricity of running a straight mile in the heart of New York City within the wall of fans cheering us on. It’s an experience I cherish each year, as it signals the end of one season and reminds me how hard I want to continue to work so that I can return for the next one.”

Coburn, 25, also of Boulder, CO, is training partners with Simpson and is fresh off winning the 3000-meter steeplechase final at the U.S. Olympic Team Trials, her fifth national title in the event. At the 2012 London Olympics, Coburn was the youngest runner on the U.S. track and field team at age 21, and finished ninth in her event. This May, she broke Simpson’s American record in the steeplechase with a mark of 9:10.76 at the Prefontaine Classic.

The rest of the world-class professional athlete field for the New Balance 5th Avenue Mile will be announced following the conclusion of the 2016 Rio Olympic Games in August.

“Thousands of runners of all ages will run the world’s most iconic road mile, from the Metropolitan Museum of Art at 80th Street to Grand Army Plaza at 60th Street,” said Michael Capiraso, president and CEO of New York Road Runners. “This is a fantastic opportunity with New Balance to show its support for runners of all ages and abilities – from kids to Olympians – in New York City during its first year as title sponsor of the event.”

The New Balance 5th Avenue Mile will be comprised of 23 races this year, including specialty heats such as the NYPD/FDNY Mile, the George Sheehan Memorial Miles for runners 60 to 69 and 70+, and the women’s and men’s NYRR Road Mile Championships, featuring top local athletes. There will also be kids’ races for kids ages 2-6.

The New Balance 5th Avenue Mile will be available live on USATF.tv, the digital streaming platform of USA Track & Field powered by RunnerSpace. A complete replay of the event will be available soon after the conclusion of the live coverage and will be made available to subscribers of the +Plus platform on USATF.tv. +Plus subscribers have access to hundreds of live and on-demand events in track and field and road racing including training videos, athlete profiles and exclusive content.

NYRR and New Balance have gradually launched a new relationship in 2016 that will reach full engagement in 2017, covering a wide range of areas including event sponsorship, youth programming, global licensing, and e-commerce and retail rights for footwear and apparel. This year, New Balance has become the title sponsor of both the New Balance Bronx 10 Mile and the New Balance 5th Avenue Mile, and is also working together with NYRR on the opening of a new NYRR running center, set to open in late 2016 near Columbus Circle.

In 2017, New Balance will become an NYRR Foundation Partner and the Official Athletic Footwear and Apparel Partner of NYRR. The year-round engagement will feature sponsorship of the NYRR Five-Borough Series (United Airlines NYC Half, Airbnb Brooklyn Half, NYRR Queens 10K, New Balance Bronx