No one wants to get injured. Yet it’s something we all experience at some point, whether it be something minor or some significant and serious injury.

Last September, thankfully after my race season had ended, I had the unfortunate experience of breaking my elbow. It was an otherwise minor fall on the bike – going almost zero (no, I wasn’t trying to unclip). I landed squarely on what we know as the “funny” bone, and heard a crack. Off to Emergency, where an x-ray confirmed what was one piece was now two. Surgery would be required to wire it back together.

As I sat in the Emergency room waiting for the bandaging and plaster splint, I faced my new state of immobility with a perspective of how things could be worse. My thoughts immediately went to that of my friend, whose husband – a competitive triathlete and cyclist less than four years earlier – was in the final, merciless stages of ALS. (Sadly, his strong battle ended in December.) I drove home (safely, with one arm), and once I was finally in bed, exhausted and uncomfortable, I wanted to cry. I shed about six tears, and that was it. I told myself that I could have that one cry, that one little pity party, and then it was done.

I knew my injury was recoverable. It was a temporary situation with a fix done by many orthopedic surgeons these days. I WOULD RECOVER. As I’ve mentioned before, my Road I.D. bracelet includes the phrase, “Be Positive, Be Grateful.” It was definitely the time for that mantra. Being positive isn’t always the easiest thing to do (yes, I’m talking to you, last 20 miles of the bike Ironman Canada!), but at least for me is an ongoing goal – sometimes achievable, sometimes not.

The weeks that followed would include a previously planned trip to Kona a few days later to watch the Ironman World Championships. If I had a dollar for every person that asked me if I’d injured my arm just before the race, my plane ticket would have been covered! Despite not being able to run, bike, swim or hike aggressively while there, I still relished the time on the island. 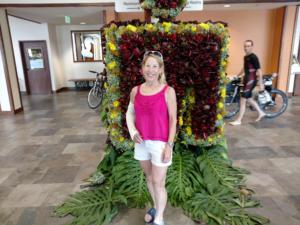 Still got to have fun spectating at the Ironman World Championships

Within hours of my return, I was in the operating room getting the hardware. I was extremely sedentary in the days following the surgery, but just over a week later got some sunshine with an easy walk on the bike trail. 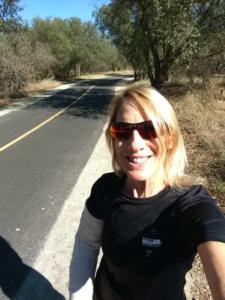 Loving the sunshine during one of my first walks after surgery.

From there, it would be weeks of recovery, ultimately beginning physical therapy to bring flexibility and strength to the injured and atrophied arm. In December I was able to resume easy running, some spinning on the bike trainer, and easy, short swims. I was thrilled.

On New Year’s Day, I did my first (very short!) outside ride. I was nervous with handling, but it felt great to get out on the bike trail and see the river. 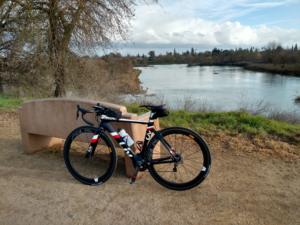 Happy – and a bit nervous – to be on my bike outside again!

Now in March, I still “feel” my elbow every time I bend it, but I’m back to regular training, putting in the miles on the trails, roads, and in the pool. I feel like I’m right where I need to be with training, and I’m grateful for every spin, step, and stroke.

While the title of this blog post might be a bit tongue-in-cheek,and I don’t recommend that one break a bone to confirm perspective, I’ll say that going through this ordeal proved to me that attitude is a big factor in coping with injuries and obstacles, both within and outside of sport.