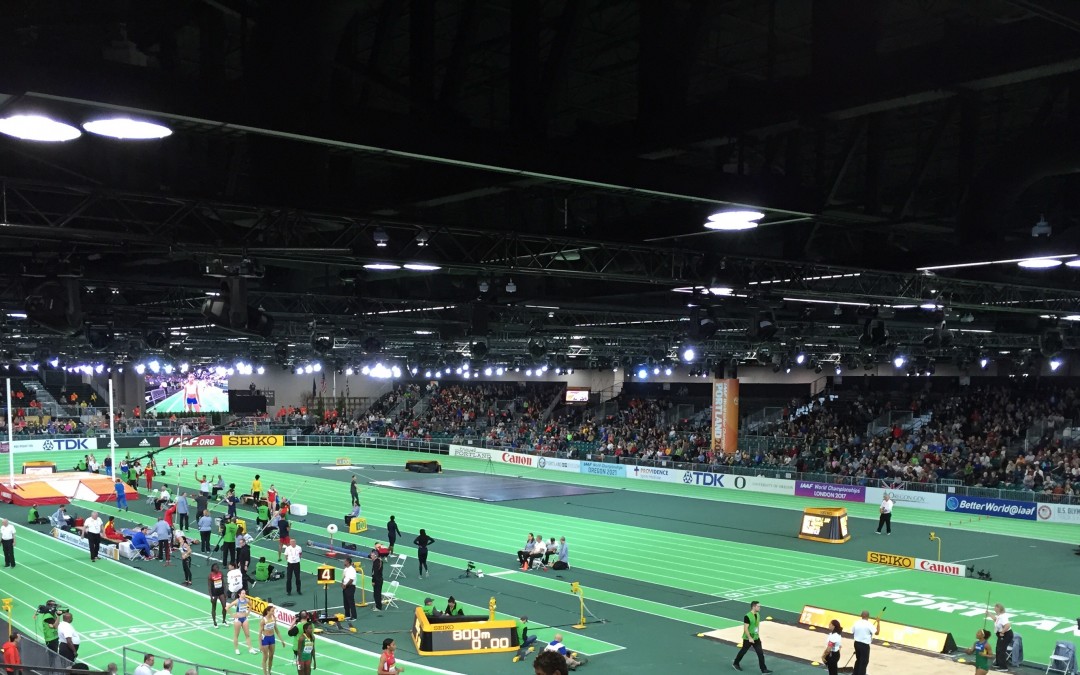 Organizers of the IAAF World Indoor Championships Portland 2016 gave masters runners a chance to shine on the big stage during the Saturday morning session. They took full advantage of the opportunity, bringing the large crowd to its collective feet with two outstanding 800 meter races.

The women aged 55-and-up were up first and current French record holder Helene Douay took the pace out hard from the start. Lesley Chaplin of the U.S. gave chase with Julie Hayden of the U.S. and Karen Brooks of Great Britain. Douay was able to hold off Chaplin in the end, winning by .27 seconds in 2:37.30, with Brooks edging out Hayden for the bronze medal.

“I couldn’t stay with her,” Chaplin said of Douay. “She was flying on her strides during warmup. I knew she was going to go out fast.”

The men’s race of those aged 60-and-up was even tighter. Top seed Joe Gough of Ireland moved into the lead just before the bell, but Great Britain’s David Wilcock made a strong move down the homestretch. The pair waged a stirring battle over the last 50 meters, as Wilcock got to the line first in 2:15.90. Gough’s legs gave out in the last strides, as he hit the line and the track simultaneously just .11 seconds behind. The bronze went to Oleksandr Lysenko of Ukraine in 2:17.38.

The winner Wilcock saluted his fellow competitors and the vocal, supportive fans that showed their appreciation of the effort.

“You know the guys gave a good competitive race and the crowd, that Portland crowd down there, it really, really lifts you. I couldn’t ask for anything more. It was a good time. That’s what it’s about – to entertain the crowd and just give it a 100%.”

The Portland 2016 Championships have given youth a number of cool opportunities to compete and gain inspiration from rubbing elbows with the elite athletes. The masters athletes also showed that there is a lot of joy in competing well at any age, which is inspiring for everyone.

Chaplin concurred, saying, “It was just so much fun. They picked our age group which was incredible. They wanted a race and they got one.”