In 2009 Lisa Roberts started racing professionally and hasn’t looked back. Since 2009 she has consistently placed top 5 in 70.3 and Ironman distance events and this season was no different. Her 2016 race resume includes 3rd at the Ironman North American Championships in Texas and 2nd at the 70.3 PanAm Championships – giving her enough points to earn a spot on the starting line at the Ironman World Championships in Kona on October 8.

Roberts success if often attributed to her strong bike-run combination. In 2015 she set the run course records at both Ironman Chattanooga and Ironman Mt. Tremblant. Looking at her run splits it is not surprising to learn that she is a former collegiate cross country athlete. 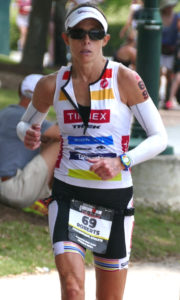 Keep your eye on Roberts in Kona and look for her to use those fast run legs to improve on her 2014 Ironman World Championship performance where she placed top 20 and 5th American.

We caught up with Roberts to talk more about her race in Kona.

In the past few years, you have placed your mark as a super strong biker and fast marathoner placing many times on the podium in several Ironman races. You’ve also set many course run course records- the distance running background has been a huge benefit for you as a pro. Are there any specific workouts or things you change to prep for a strong run heading into Kona? Is there any advice you would give other athletes on how to prep for a good Kona marathon?

My running prep for Kona is largely the same as it is for most other Ironman races and that centers around consistently getting the miles in and staying sharp/fast with key interval workouts.  I try not to overdo it when it comes to running and there is a fine line between getting enough time in on my feet and risking overuse/injury.  I need to continually walk that line if I want to make gains though!  I would give other athletes the same advice to prep for a good marathon.  As for the Kona marathon specifically, I would suggest getting in some runs in warmer/humid conditions and definitely, definitely practice your nutrition for before and during the run.

As stated before- you are also an accomplished road cyclist (cat 1) and elite distance runner- how has being involved specifically in other races outside of triathlon helped you become a better Ironman athlete?

With bicycle racing in particular, many times it is the smarter, more tactical, savvy person that wins.  Not necessarily the strongest. Of course in that instance you have team members to work with and you can rest/draft at times, but there is also that element of having to turn yourself inside out if the pack surges and you need to hang on.  Usually the surge happens at the exact time you are on the rivet already and you have to dig. Really deep.  You just can’t mimic that kind of suffering in solo training all the time.

What was one of the key things you learned from last Kona performance? What went well and what did you focus on improving from last year?

I learned that I definitely don’t want to have 5 IM races under my belt in less than 10 months time leading into Kona.  I was pretty tired and beat up when I raced here last.  Other than that, I’m focusing on specific parts of the course where I struggled and fine-tuning my nutrition plan so I stay 100% the whole day.

What do you feel is your biggest strength heading into this year’s race?

I feel my consistent racing and the fact I am much more rested and prepared this year is my biggest strength. That, and a lot more open water swim training/confidence under my belt.

Besides being the Ironman World Championships, what/ how do you prepare differently for this Ironman compared to others? Are there more race tactics, etc.? Or do you prepare for this race the same as other Ironmans?

I prepare for this race much like I do any other.  Because it is the World Championship I will be much more fine tuned and rested perhaps.  But like any other race, I make sure I know what I’m up against with regard to the course, weather conditions and competition.  And then I execute my strategy on race day and see what happens!

Do you have any race day superstitions or special things you do before an Ironman or before Kona?

Other than adjusting my gear 100,000 times before the race, I make sure to take several minutes of quiet time at the swim start to just soak it all in and get centered.

What do you feel like defines you as a strong professional female athlete? Are their specific thoughts or mantras that make you feel stronger on race day?

My perseverance and ‘never give up’ attitude makes me strong.  Time and again I come out of the water well behind the leaders and inch my way toward the front all day, many times without even seeing the competition for quite a while.  It’s a hard thing to do – motivate yourself to stay in the game and not get discouraged.  The thought that comes to mind the most is – “it’s a long day and anything can happen.”