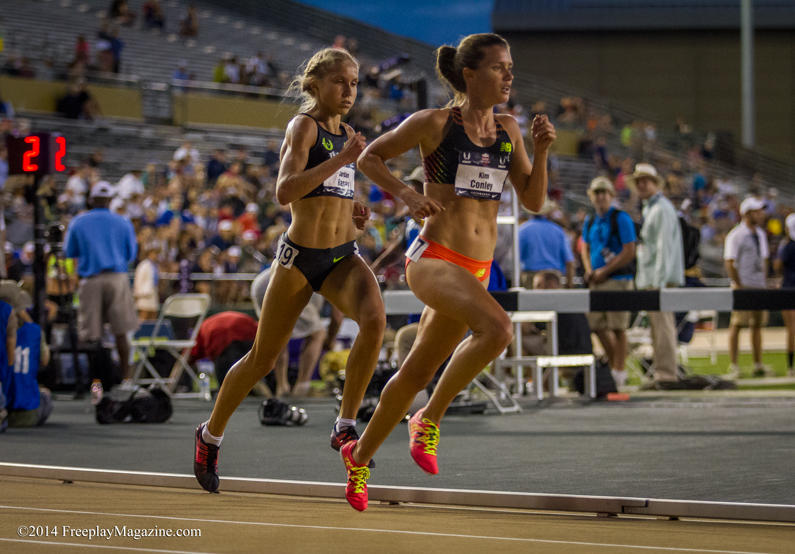 When Jordan Hasay went by local favorite Kim Conley to take the lead with 200 meters to go in the 10,000m Thursday night, the groan that went up from the stands was deafening. Conley had spent the better part of the last two miles of the race picking up the pace and trying to drop Hasay. She had managed to separate the two of them from the rest of the pack, but the younger runner still hung right on her heels.

“I knew when she was still with me with 600 meters to go that a move was coming,” said Conley after the race.

And, then the move came.

Hasay’s acceleration with 200 meters left in the 25-lap race seemed decisive. She put a gap on Conley almost immediately. It seemed that there was no way Conley, who isn’t well known for her finishing speed, could come back to close that. The crowd, which had been screaming ‘Go Kimmie’ for 30 minutes, moaned in collective disappointment.

“I just kept saying one word over and over again: courage,” said Conley of the 10,000 meter race.

She admitted after the race that she may have been a little nervous in that last lap, with Hasay right next to her. But, she said, she thought of the Olympic Trials and what she had been capable of then.

In the process of running a 65 second last lap, Conley passed Hasay back with 50 meters to go and just held on. As she crossed the line in 32:02 to claim her first ever national title, Conley threw up her arms in shock and excitement. Hasay finished just one second later.

“I’ve wanted to win a national title for so many years now,” Conley said.

When the heavy favorite Shalane Flanagan announced her withdrawal from the race late Wednesday, it created a chance for Conley, Hasay, and 2012 10,000m national champion Amy Hastings to fight for the win. And that’s exactly how the race developed. Though the pace was consistent for the first 5,000 meters, it was never blistering. For the first half, the three of them stayed in a pack at the front with recent NCAA 10,000m champ Emma Bates and Duke runner Juliet Bottorff. At the 5,000m mark, Hastings took the lead and slowly separated them from the rest of the field, until Conley went to the front with just over seven laps left in the race.

As Bates put it after, “It was fun for a while, then it got really hard.”

With a mile to go, it was just Conley and Hasay left at the front. It stayed that way almost all the way to the finish line.

“In an ideal world, I could have dropped her earlier,” said Conley, but Hasay is a tough nut to crack.

Hasay, who won two NCAA titles while at the University of Oregon and now trains under Alberto Salazar, last raced on the Sacramento State track en route to winning one of her many California high school state track title. “I have some really good memories here,” she said. “The crowd was really great.”

The crowd just happened to be heavily partisan Thursday night. Even Conley laughed after the race that her late comeback in the race might have been harder if they’d been on Hasay’s Eugene home turf and not on her’s – though she’d like to think should could have still done it, Conley said.

“I did everything I could; she was just a better runner today,” said Hasay.