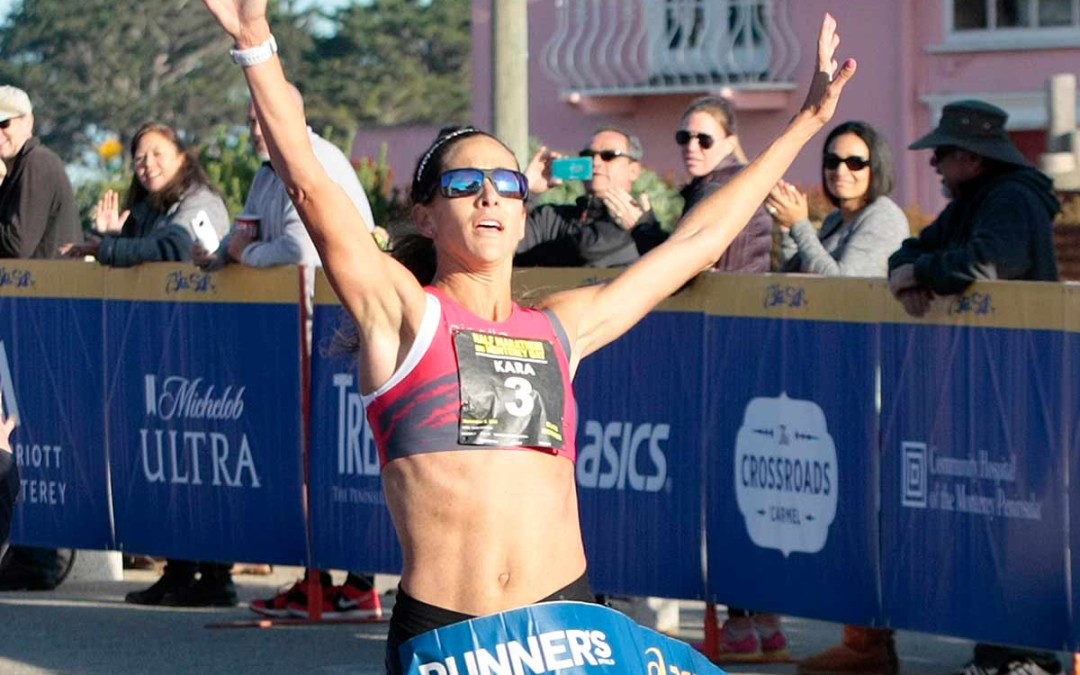 Monterey, CA — Two-time U.S. Olympian Kara Goucher and Kenyan Elisha Barno pulled away from deep fields to record the second-best race times ever and capture the overall titles ahead of nearly 7,000 runners at the 13th Big Sur Half Marathon on Monterey Bay.

Both athletes, first-timers on the scenic course through downtown Monterey and Pacific Grove, California, proved they didn’t need experience on the mostly-flat route as both distanced their peers in the last five miles.

A $20,000 purse of prize money and bonuses, the largest for a half marathon in the western U.S., was distributed among the top eight male and female runners and top three masters runners along with bonuses for the top three American finishers and any U.S. runner who qualified for the 2016 Olympic Marathon trials at the race.

In the men’s race, a pack of eight runners broke away after a conservative first two miles. The international field included five Kenyans, a Moroccan, a Canadian, and an American. Among them were two-time defending champion Jacob Chemtai and Nelson Oyugi, runner up in the last two races. After the turn-around near mile eight along the crashing waves of the Pacific Ocean, Elisha Barno and fellow Kenyan Macdonard Ondara, winner of the event in 2007 and 2010, pushed the pace to drop the rest of their rivals. Barno pulled away in the last mile to win in 1:03:04, the third fastest winning time ever. Ondara held on for second in 1:03:31. The next five runners had a great battle to the finish with only 31 seconds separating third through eighth place. Morroccan Karim El Mabchour outkicked American Scott Bauhs by two seconds to finish 3rd in 1:03:54. Bauhs’1:03:56 was not only good for 4th place overall, but he also won bonuses as the first American and for qualifying for the Olympic Marathon Trials by breaking 1:05.

The women pushed their pace right from the start with Goucher who was using this event as an important test of her Olympic Trials preparation. Ethiopian Simegn Yeshanbel, Kenyan Hellen Jepkurgat, and fellow American Kristen Zaitz spent time alongside Goucher for the first eight miles before Kara pulled away over the last five miles to win comfortably in 1:11:13, the second-fastest time ever recorded in this race. Yeshanbel held on for second in 1:12:47 and Zaitz held off Jepkurgat to finish third in 1:13:02 to Jepkurgat’s 1:13:18.

Both champions commented on the beauty and challenge of the course.

“I see the ocean, the birds flying and the people cheering the athletes so that made me run faster,” Barno, 30, said.

Goucher, 37, said “I thought this course was going to be easier than it was, but I love a challenging course. This is the starting place for me leading up to the (Olympic) Trials. It’s a good place to start; it’s the fastest I’ve started in years.”

In the masters division for runners age 40 and over, Kenyan Meshack Kirwa finished eighth overall and shattered the male masters record by over six minutes in 1:04:25.
The masters women’s race saw five-time master’s division winner Christine Kennedy of Los Gatos, Calif., add a sixth crown for runners 40 and over. Kennedy, 60, ran 1:27:26, which was 15 minutes under the old course record for women 60-64. She now holds the record for four different age groups.

The Half Marathon on Monterey Bay is presented by the Big Sur International Marathon organization. The weekend’s events also included a 5K competition and a 3K fun run with 1,200 runners taking part in the Saturday events. The running conditions both days were ideal with sunny skies and virtually no wind.

“Half marathons are more popular than ever and runners have many more races to choose from,” said Doug Thurston, race director. “We are happy our event remains very popular. It’s a tribute to the hard work of our race committee, volunteers, and staff and to the incredible beauty of this course.”

The Half Marathon on Monterey Bay is sponsored by Asics, Runner’s World, Marathon Foto, Dole Food Company, Gatorade, GU, Michelob Ultra and others. The 2016 race will be held on November 13; registration opens on April 1. For more information and race results visit www.bigsurhalfmarathon.org.