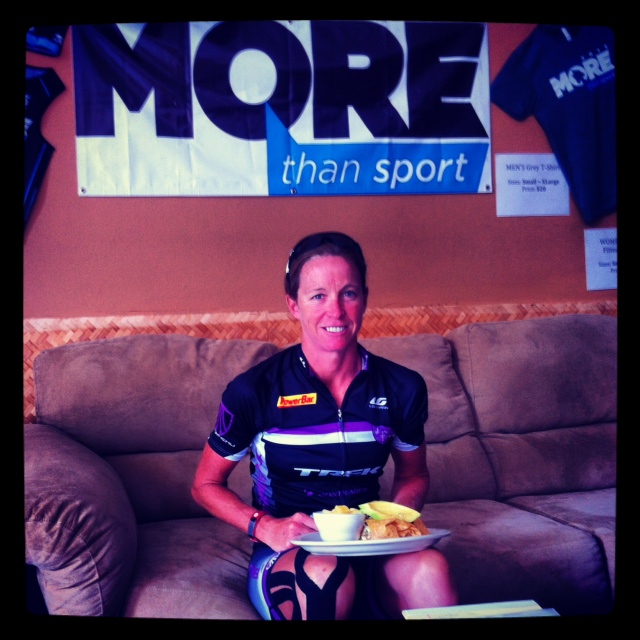 Undergoing both foot and knee surgery earlier this season, Julie Dibens has been sidelined from the sport of triathlon. Rather than hang up her running shoes and goggles, she has embraced the opportunity to address her weaknesses and ultimately put herself in a position to come back an even stronger athlete. Along the way, she has helped out Mirinda Carfrae on her road to Kona as a pseudo training buddy and friend. This previous 70.3 IM World Champion and XTERRA World Champion knows what it takes to succeed, and is prepared to come back faster than ever.

Talk a little bit about your progression throughout the season and bouncing back from injury. We know we won’t see you toeing the line tomorrow, but what will your race day duties be and how have things progressed thus far?
Things are going good I had surgery back in April so am just recovering from that. The first three months were pretty frustrating since I couldn’t do much, but the 3 to 7 months I have been able to have a lot of fun doing a lot of riding and swimming, feeling like I am getting somewhere again. I am due to start running when I get back from here. I was told 6 to 9 months is when I would start back running so I only hear 6 months. At six months I’m out there running, and my knee’s not quite ready. It swelled up a little bit, everything is good, it’s just not totally healed yet. I was hoping to race later in the season and due XTERRA Maui but I went to the lengths of having the surgery so I’m not going to screw it up. I’m going to enjoy Kona and then start when I get back home.

It’s been fun – the last 5 to 6 weeks I have helped Rinny out doing some riding with her. I feel like I’m actually in really great bike shape right now. I didn’t want to just waste the year so I spent plenty of time in the gym and tried to eliminate any other weakness I may have and make sure my body is ready for when I can start running. I want to be strong if not stronger than I was before.

Many people have faced injuries throughout their progression in the sport. Being a world class athlete is a bit different, but what are some of the key items you have used to get to where you are and hopefully back to race shape soon?
The most important thing was having some great advice and physical therapy. In Boulder I have my physical therapist Bob, Dave Scott on the strength and conditioning side, I think that’s been very important. I always get a tight left groin and it’s never been an issue, but this was the year to figure it out. I have a little more time to focus on this stuff since I’m not racing, and used this time to get rid of that stuff. Other than that, it’s using Rocktape. I used it a bit last year and used it last year here in Kona. In the last six weeks I have used it a lot more and noticed that it has really helped the swelling in my knee to eliminate my tracking issues. The surgery on my foot went really well, but I still need to protect the ligaments of the toe and have found some taping techniques I can do with the Rocktape that really support my toes. I think it will help me in the long term. I wear it everyday on my foot for sure. I wear it in the pool and at about every fifth day, little bits start to come off in the water. Some of my friends have said to me, “you swam yesterday didn’t you Dibs” and I say, “Yup…” and they will tell me, “yeah I saw the little piece of blue tape on the bottom there.”

You see lots of people walking around Kona with the “hot items” of the year whether it be vibrant colored compression, gluten-free food, their favorite company’s trucker hat… and you see the tape out there also. What’s your strategy when you put it on and how do you specifically use the Rocktape?
I think it’s really individual and it depends on why you’re using it. For my foot I’m using it to protect my foot and keep my foot in a certain alignment or a certain place. For my knee it’s more to reduce the swelling and a comfort thing. I feel happier when I have tape on it. I believe that it helps and I know that it does. It’s hard to put into words. I’m going to vacation in Kauai next week and I’m sure I will keep it on there all week even though I won’t be training.

When you are able to get back to 100% and are ready to start competing, do you see yourself continue to attack 70.3, Ironman, and XTERRA, or do you see yourself specializing in one distance?
I think I’ll still mix it up. The main goal is to come back to Kona and do what I think I am capable of doing. That’s definitely my main focus. Half Ironman is probably my best distance, but there’s the appeal of Kona that outweighs that. I’d say 70.3s will be my focus for the first half of the season and then transition to Ironman being my focus for the second half. I love XTERRA. I have done well in Maui a couple of times and would be a great way to finish off the season. Everybody who has raced XTERRA knows how much more laid back it is and how much more fun it is. For me, if I can come to Kona and do what I want to do here, it’s the perfect fit to then go to Maui and try to have some fun ripping up on those other girls.