Huddle and Rowbury Battle to the Tape 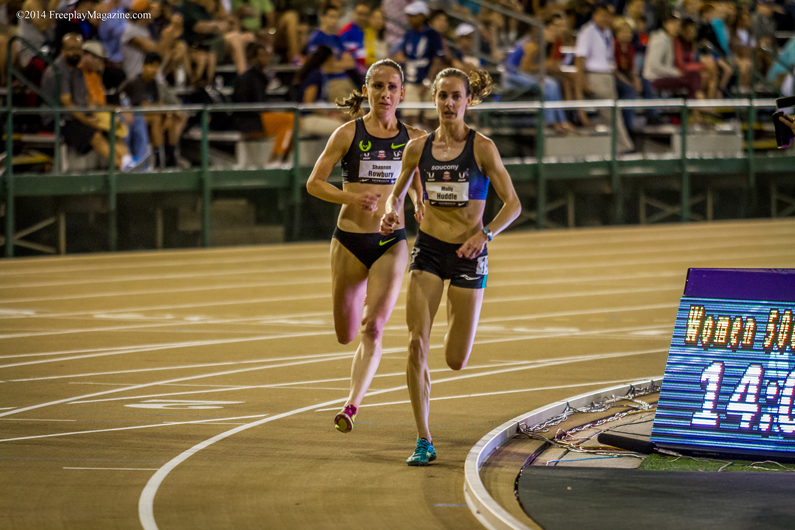 Friday night it was the Molly and Shannon show as Molly Huddle ran a 62.4 last lap in the 5,000m to repass Shannon Rowbury on the inside in the final stretch and take the win in 15:01.56. Rowbury, a San Francisco Bay Area native who recently moved to Oregon to train with Alberto Salazar, followed in 15:01.71 – barely a full stride behind.

“She’s been racing really well,” said Rowbury of the new national champion. “I hoped I’d be able to kick by her, but she’s a tough girl. That’s why we race.”

“If I’m going to lose to someone, she’s someone I definitely respect,” said Rowbury.

Though the two are friendly, they rarely meet on the circuit with Huddle typically doing longer events and Rowbury sticking to the shorter races. But, Rowbury, a two-time Olympian in the 1500m, has been working on her endurance and strength to be able to add the 5,000m to her repertoire. “I’m still building up my endurance,” she said. Clearly, she joked after the race, she still has work to do. “I’m just going to have to get stronger.”

Huddle, though, was worried about Rowbury’s speed. Instead of burning all her matches right at the start of the bell lap, Huddle said she tried to conserve a little bit – knowing that she’d need something extra on the homestretch. “I tried to go 80% at the bell,” she said.

The 5,000m American record-holder said the plan was to take it relatively easy earlier in the 12-and-a-half laps and see if anyone else would lead. But, no one did. So, the two instead led a small pack that slowly pulled away, with Huddle at the front almost the entire race.

“I was starting to get a little nervous leading in the middle,” said Huddle. “I just tried to make sure I felt like I had enough left for a hard kick, because I knew Shannon is a great closer and I’m going to have to pull it all out the last 200.”

It was with two laps to go that Huddle really picked up the pace and the duo dropped recent NCAA 5,000m champion Marielle Hall, who held on for third in 15:12.79 Rowbury then made an identical move to another Salazar-coached athlete, Jordan Hasay, who surged at the same spot in the 10,000m on Thursday night. Both Hasay and Rowbury took the lead 200 meters to go in their respective races and both got passed back in the homestretch. (Hasay scratched from the 5,000m before the start.)

“They broke me, definitely,” said Hall, but she was happy with her post-collegiate effort. “I’m glad I wasn’t intimidated by the names in the field.”