HISTORY REPEATS ITSELF AT HALF MARATHON ON MONTEREY BAY 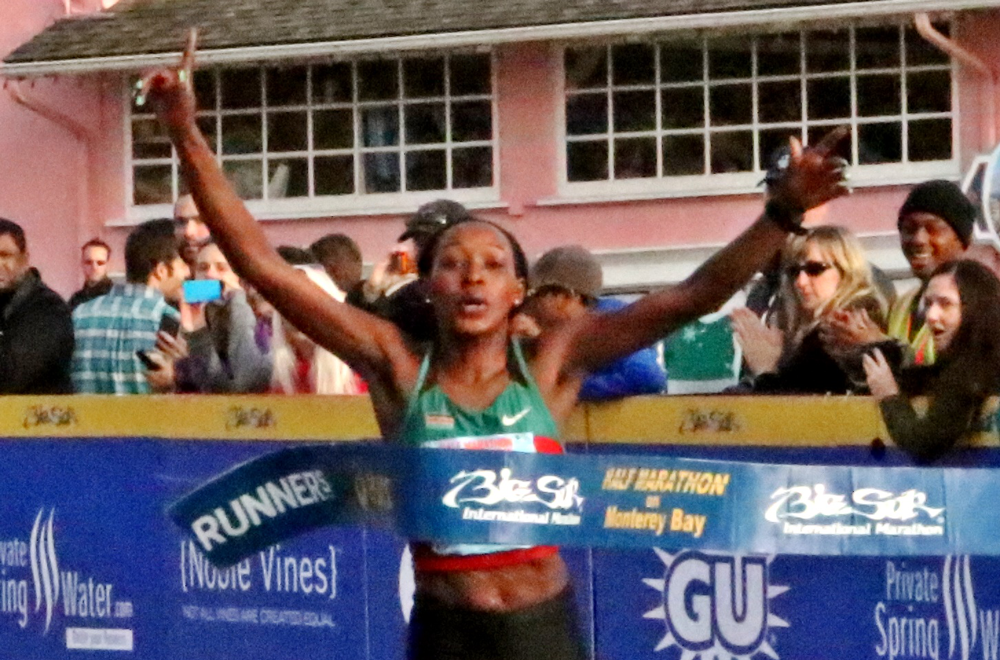 Monterey, CA — History repeated itself at today’s 12th Presentation of the Half Marathon on Monterey Bay. The 2013 winner and runner up, Jacob Chemtai and Nelson Oyugi , took the one-two spots again at this year’s scenic race along the Monterey Bay. Both male runners, members of the AmericaKenyan Running Club based in Santa Fe, New Mexico, welcomed female teammate Sarah Kiptoo as the women’s champion.

Guor Maker, a 2012 Olympic marathoner, started out with the leaders but dropped back before mile three where he held position to the finish, completing the 13.1 mile distance in 1:05:52. Maker, called “the man without a country” during the Sochi Olympics running under the Olympic flag since his native country of South Sudan did not have an Olympic Committee, praised the course, the Big Sur race organization and all the runners. “It was an honor to be able to run such a race; the course was not easy, but manageable,” he said.

The prize purse of $20,000, the largest in the Western U.S., was distributed among the top eight male and female runners, and top three male and female Masters (over 40). This year additional cash bonuses were awarded to the top three male and female American runners and to any runner qualifying for the 2016 US Olympic Marathon trials with a time of sub-1:05 for men and sub-1:15 for women. Kara Foster (2nd place) of Boalsburg, PA, took home a $500 bonus for coming in under the Olympic Trials threshold at 1:14:29. Kristen Zaitz (3rd place) of Broomfield, CO, finished at 1:14:37, though had previously qualified for the trials to the 2016 games in Rio de Janeiro. No American male finished under the qualifying standard.

The top Masters runner included Christine Kennedy of Los Gatos who took 1st place at 1:27:19. The 59-year-old finished well ahead of the much younger 2nd and 3rd place female Masters (46 and 44 years old), earning her fifth title as Big Sur Half Marathon on Monterey Bay Masters Champion. Chris Knorzer of Rocklin, CA, won his second Half Marathon on Monterey Bay Masters title with a finishing time of 1:11:05.

The 12th Presentation of the Half Marathon on Monterey Bay drew 9,000 participants from all 50 states and 20 countries. A beautiful sunrise greeted the runners in downtown Monterey. Running conditions were ideal on the gently rolling course which skirts the waterfront for nearly 75 percent of the course.

Saturday welcomed an additional 1,200 runners competing in the Pacific Grove Lighthouse 5K and the By the Bay Kids’ 3K, also along a waterfront course.

“Today was another successful event,” said race director Doug Thurston. “The runners appreciate the beauty of the course, the friendliness of the communities and the fast course – it’s a good course to go for a fast time.”

Full results from all events can be found on the race website HERE. 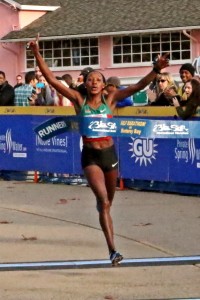