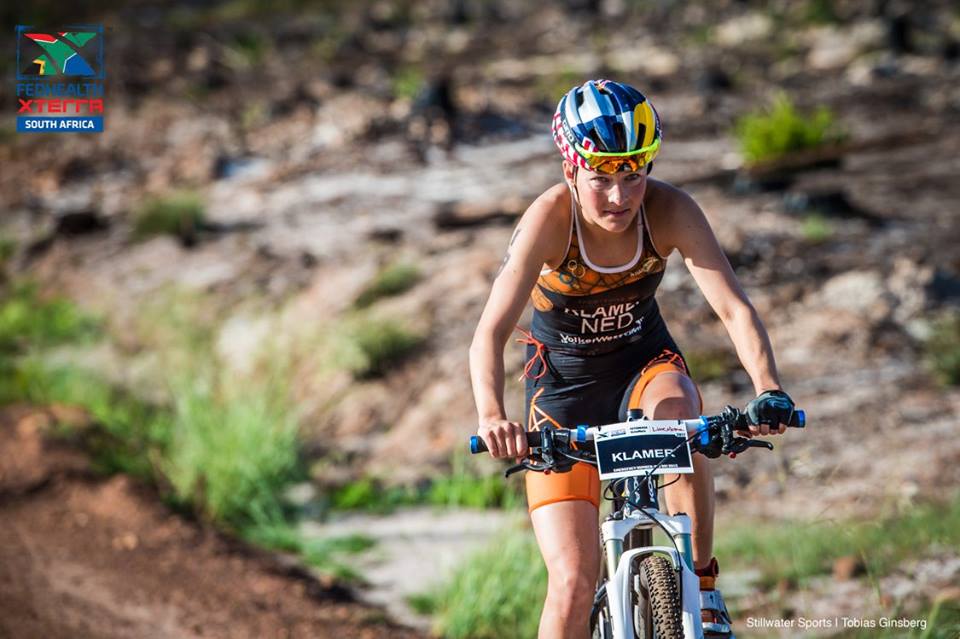 February 25, 2017 – Olympians Richard Murray and Flora Duffy captured the 14th annual Fedhealth XTERRA South Africa Championship on a magnificent Saturday morning at the Grabouw Country Club, which sits on the edge of the Hottentots Holland Nature Reserve in the Elgin Valley about an hour’s drive from Cape Town.

It’s the second XTERRA SA title for Murray, who won his first in 2013, and the fourth straight for Duffy, who has won 11 consecutive XTERRA majors and 15-of-18 since her off-road debut in 2013.

In the women’s race Duffy did what she does best … dominate. Her winning time of 2:39:00 was more than six-minutes faster than runner-up and SA Olympian Mari Rabie.

“Being the first race of the season, you don’t really know where you’re at,” says Duffy. “I was a little nervous, but everything went well and I had a lot of fun. I had a good swim, sticking to Mari’s feet. On the bike I worked hard on the climb, and went smoothly on the technical sections. I’m currently nursing a hip injury, so on the run I decided to practise more control. XTERRA Grabouw is always special. It’s where I started. I’m very happy with my fourth victory.”

Rabie, a two-time SA Champ (she won her first XTERRA title back in 2005), may be “retired” but is still one of the fastest female triathletes alive.

“I’m absolutely delighted to come second today,” says Rabie. “I enjoy XTERRA because it’s tough and rocky. I was actually in competition with my boyfriend. We’ve both just retired from racing, and this was his first triathlon. He actually beat me, so I guess he takes the XTERRA crown.”

Making her XTERRA debut on the day, Rachel Klamer from the Netherlands rounded off the podium in the women’s race.

We were once again overwhelmed by the number of XTERRA Warriors that lined up on the start line today,” says Michael Meyer, Managing Director of Stillwater Sports. “Even more impressive was the number of first time contenders. Grabouw offers the perfect setting for a world class event. We are thankful to all entrants for their support and look forward to continue growing the sport of XTERRA in South Africa.”

XTERRA President Janet Clark added that the “vibe here is so cool. As you drive in you are greeted with signs that say ‘Welcome to XTERRA Country.’ African drummers and the national anthem start the day – a mass start with one lap of 1,500 meters. There are warriors everywhere, families hanging out, a FedHealth Kids zone with art supplies, bouncing castle and movies, a ProNutro breakfast zone serving free breakfast, a huge Bos Sport recovery area, Dan Hugo’s ButtaNutt spread served in recovery, a big beer tent, VIP areas, lots of vendors, and Total Sports, the official retailer, was personalizing race shirts with athletes’ name for 100 rand. Over 130 relay teams and 700 individuals on the day, and thousands more over the three days. It’s simply WORLD CLASS.”

Says Jeremy Yatt, Principal Officer of Fedhealth: “The Fedhealth XTERRA Grabouw Full event is the one to do if you’re a serious off-road triathlete, or keen to clinch one of the various age group qualification slots for the XTERRA World Championships taking place in Hawaii in October. Grabouw offers unforgiving, yet breath-taking terrain, and the chance to bring your family to either participate or spur you on across the finish line. It’s no wonder it’s the biggest XTERRA event in the world.”

XTERRA South Africa was the first of 41 events where amateur athletes from around the world could qualify to race at the 22nd annual XTERRA World Championship at Kapalua, Maui on October 29. Here’s a look at who punched their ticket to paradise today:

TEAM Unlimited LLC, founded in 1988, is the Hawaii-based television, events, and marketing company that brought off-road triathlon and trail running to the world under the brand name XTERRA. From a one-off race held on the most remote island chain in the world XTERRA evolved into an endurance sports lifestyle with worldwide appeal. Over the past 20 years XTERRA transcended its status as ‘just a race’ to become a bona-fide way of life for thousands of intrepid athletes as well as an emerging brand in the outdoor industry. In 2017 XTERRA will offer more than 200 off-road triathlons and trail running events in 33+ countries worldwide and produce 10 adventure television shows for international distribution. Learn more at xterraplanet.com.