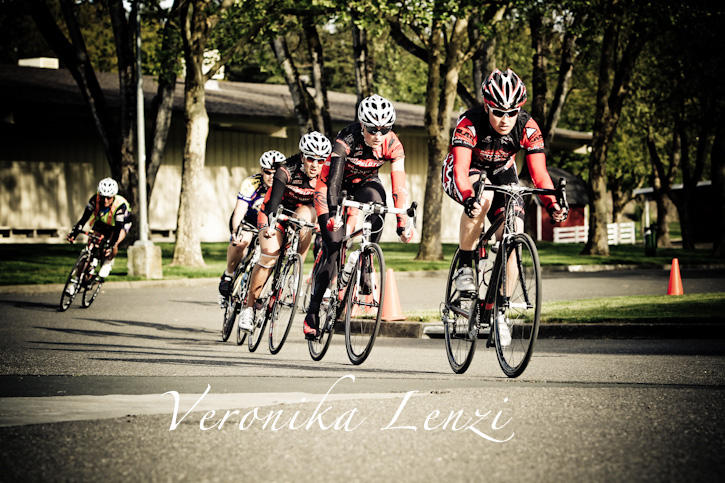 The Tuesday Night Twilights(TNTs) are a tradition to Northern California. The TNTs are essentially the grassroots of this cycling community and have been in existence for over 20 years. Originally started at the Santa Rosa Corporate Center, the TNTs relocated to the Sonoma County Fairgrounds four years ago, and there began Veronika Lenzi’s promotion of this local legacy.

The TNTs have not only produced outstanding male and female athletes, but have provided many young adults with a positive venue by providing a place to go and enjoy and learn the sport of racing a bike in a safe and controlled environment. The TNTs encourage and welcome those that have never competitively raced a bike. Mentors are key to assisting all riders in furthering their skills on a bike and to ensure safety. A women’s training race was introduced in late 2012 with coaches such as Nina Strika, Laura Charameda, Mariko Fischer, and other mentors in their field to help encourage and promote more women into the sport.

Freeplay: How did you get involved in promoting the TNTs?
Ronnie: I used to volunteer by taking photos and working at registration. When the previous promoter was no longer able to run the TNTs, a committee of 6 people was formed to help keep the TNTs alive. I handled running all aspects of the event with the assistance of the other committee members and eventually after a successful first season, the committee was dissolved and I continued to run the event.

Freeplay: Promoting the TNTs is so important to you, what motivates you to continue to put in countless hours of obtaining sponsorships, funding/donations/volunteers, licenses/permits/sanctioning?
Ronnie: I love cycling and admire and respect the blood, sweat and tears that a cyclist puts into this sport. I love the fact that this event can help grow the sport and is a place for riders to train safely and perfect their art. I didn’t want to see the community lose such an icon, and I love being part of it.

Freeplay: TNTs provide a consistent racing series every summer and give back to those who participate. What do you do to give back to these cyclists?
Ronnie: I’ve tried to save as much money as I can after expenses so that if there are situations where the TNTs can assist a rider with funds we can do it. Occasionally I see that someone might need help with registration at a race, if they don’t find someone to lend them money, I will pay their registration and in return ask that they openly give kudo’s to the TNTs. I’ve helped pay for trips for riders; I gave 1000.00 to a rider to help with a racing trip to Europe. I gave $500.00 to another for a trip to Nationals. I purchase items like Trigger Point therapy tools to help riders maintain the health of their bodies. I have kept registration affordable and if I have the funds, try to have one night in a summer series where juniors race for free.

Freeplay: What is your vision for the TNTs and for the development of women and young riders into the sport of bike racing?
Ronnie: When I took over the TNTs there were 3 races. I introduced a juniors and women’s race so that they could compete, learn and grow with their peers versus only having an option to race against adults (juniors) and men (women). Introducing these races allows the riders to have a goal of being able to advance to the second race and race against more experienced (sometimes) riders, further nurturing their growth.

Freeplay: Although women were allowed to race with some of the men’s fields in the past, what was the spark that ignited creating a specific women’s training race?
Ronnie: Although the TNTs are a non-competitive event series, they are very competitive and it was clear we were not nurturing or attracting women riders as we should. I’m not saying that the women weren’t able to race with the men, I just thought that we could attract more women into the sport and help women that were already racing become better at their sport if they had the opportunity to race with other women and have a venue where they could work with their coaches in their own race. The more advanced race categories can be pretty intimidating to a less experienced rider, man or women.

Freeplay: Did you find that experienced female racers/coaches were motivated and eager to donate their time to mentor the women’s training races?
Ronnie: Absolutely, the support and encouragement that the women give each other is amazing.

Freeplay: Since the start of the women’s training races, what progress and interest have you seen? Do you see increased participation by seasoned women and those new to the sport?
Ronnie: It’s been up and down. Last season we had two “ladies” nights and one had a great turn out. We made it fun by having a sock contest and we also didn’t let anyone go home empty handed, every women got a prize. The second one didn’t have that many women but it was also later in the season. I would love to see more women come to race but also understand that life can get in the way.

Freeplay: This next season of the TNTs begins on April 8. What do you expect this season’s series to bring its participants, especially to women cyclists embarking on their first season of racing a bike?
Ronnie: I have made a lot of changes this season. I want to go back to the grass roots of the series where riders are racing for coffee and bread as they did 10 years ago. I’m introducing a points series with a huge prize at the end of the season. I am hoping to see more women and will worth with the coaches in the area to help bring them out to race.

Freeplay: What are you most proud of with the implementation of women’s training races and the overall feedback you receive from these women?
Ronnie: I’m proud that we introduced a women’s race and it’s great knowing that the TNTs have helped some riders do more competitive racing and even upgrade as a result of racing at more competitive races. I think the women are happy that they have their own race and have the ability to work with coaches during their race. I would love to see 15 – 20 women show up each race night, which would be so awesome.