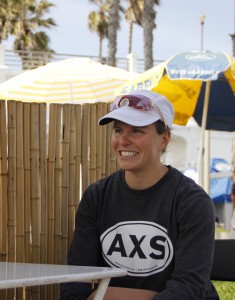 2012 Age Group 70.3 World Champion, Danielle Kehoe, is kicking off her 1st pro season this weekend at the California 70.3 in Oceanside. Kehoe, 25, followed in her older brother and sister’s footsteps and began competing in triathlons at the age of 7. After finishing her first Iron Kids race Kehoe continued to compete in at least one triathlon a year for fun having never actually trained for them. When she turned 16 years old she decided she loved triathlons and committed to train and race more competitively. Soon there after she joined Siri Lindley’s group of athletes where she enjoyed a mix of traveling and training until struck by injury. While side-lined with an injury Kehoe decided she was ready for a break. From triathlons. Her break didn’t last long as she was approached by an old coach who convinced her to give Xterra racing a try. Depsite having no prior mountain biking experience, Kehoe had a very successful first year of racing. However things did not go quite as smoothly in year 2. After numerous crashes broken helmets and bikes, fear began to mount to the point where even her mother questioned if Xterra was right for her. While she was questioning whether Xterra was the path she wanted to take, the opportunity participate in adventure racing was dropped in her lap. She went on to compete in events that lasted from 12 hours to 36 hours. After completing a 36 hour race Kehoe decided that she was ready to tackle an Ironman. Before she knew it she was swimming, biking and running with success at Ironman St. George! Kehoe has been racing her way to the top ever since that first IM in Utah. Kehoe takes a minute out of her busy training schedule to talk with Freeplay about her entry into the professional ranks and what is to come.

Last year you were the top first or second amateur overall in all your races from sprint to ironman distances. With such great range what do you consider your strength?
The longer the race goes the better it is! Sprint races make me so anxious because you make one mistake and you are done. In Ironman races you can make a mistake and still have time to fix it.

What is your favorite discipline of the three?
The bike! My least favorite is the swim. I am always thankful when I get out of the water.

At what point in your season last year did you decide that you wanted to go pro?
I always wanted to go pro but I wanted to do so when I felt like I was strong enough to compete well. I decided that if I placed top 10 age-grouper overall at Kona that I would go pro in 2013. Then after grabbing the amateur 70.3 World Championship title in Las Vegas I knew I was ready and felt confident in my decision.

What do you feel are the keys to having a successful professional rookie season?
I have recently started working with new coaches and we are working on both my swim and my run. I also made the decision to not work this year which has been huge help. I also keep reminding myself to be patient because it is not going to happen overnight. I don’t want to get discouraged. I plan to use each race as a learning experience and hope to build off each one of them.

What changes have you and your coaches made to your training this year?
We are really working on my weak spots and not focusing on the bike as much as I have in the past. It will be interesting to see how that translates this year. I was biking the best I have ever biked last year so I am anxious to see if I am able to hang on to that. I feel that races are not necessarily won on the bike but they can be won on the run.

Tell me about your schedule. I have noticed that you have more longer races this year as well as less recovery time between races.
I have never done so many half ironmans in a year. This is totally new to me and it is just because of the KPR point system. I am trying to gain points because ultimately I would love to go to Kona. I picked my races based on 3 things: where they are located- are they drivable, if they are tough challenging courses, and ones that are spread out enough that I have time to recover and race well.

California 70.3 Saturday will be your first pro race. What is your strategy for Saturday?
Races that I go into and have fun and actually smile I do so much better at. I try to remind myself that I am here to have fun and if I do that I have won already. My strategy is to have fun and enjoy the day!

Best of luck Danielle, and have a great race!