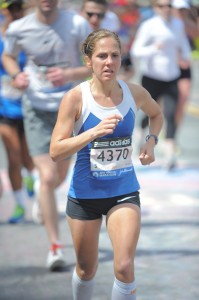 On race morning I toed the line more ready than ever before. Everything started out as planned. At mile 14, I was running 6:48 pace on the nose but just one mile later at mile 15,  I knew I was in trouble. My quads suddenly felt trashed from the relentless downhills.  I held it together the best I could for the next 11.2 miles.  So many times during workouts and long runs I let my mind wander to that final push down Boylston Street, where I lurched myself forward and across the finish line in 2:59:XX but that is not how the race played out.  The outcome was quite different and that was ok.  I made a deal with myself before the race. If I gave it my all, on what most marathoners would agree is a pretty difficult course, I would walk away with my head held high.  I did just that. With a final time of 3:03:14 and a 13 second PR, I proudly hobbled on shredded quads back to my hotel room with a smile on my face.

Grateful to be quickly reunited with my fiancé Kevin Pool, who had finished with a PR of 2:18:59 (18th place and 7th American), we cleaned up so that we could grab a late lunch.  As Kevin was wrapping up a call to his Mom, I gingerly attempted to bend over to tie my shoes. That’s when it happened.  A noise I can only describe as a sonic boom shook our room on the 21st floor.  I immediately locked eyes with Kevin and out of my mouth flew “what the f$#% was that?”  We scrambled to the window.  I looked down and saw a huge billow of grey smoke coming right from what I knew to be the exact finish line of the marathon.  With only 5 seconds of lag time the second blast went off.  People were just running.  10 seconds later emergency vehicles were driving the wrong way down Boylston Street, against the course finishers.   What was going on?  In a matter of 15 seconds, my world as I knew it, as a marathon runner and as a race director, had completely changed. 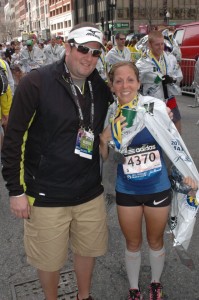 Sadly, there was no confusion for me.  I knew it was a bombing.  I had seen the snipers on the rooftop at the start line village and put the puzzle together years ago.  25,000 people in one place has the potential to become a target.  I panicked and began to cry and scream hysterically.  Where were two of my best friends, Jay and Bill, who had VIP seats in the grandstands at the finish line?  Was the media center affected at all and was Erin ok?  Where was our roommate Cheyne, who finished 30 minutes before I did?  Why wasn’t he back yet?  I started shaking uncontrollably as all the thoughts whirled around in my head.  Where were the SRA board members we had traveled to Boston with?  Where was Stephanie, Stacy, Laura?  Who was I forgetting?

I was able to type out four critical texts and as each one of them failed to send due to the already overwhelmed network, I began to hyperventilate and cry louder.  In twenty minutes’ time, I had sent and received responses from my texts.  I tried to call my parents.  I got through and when my stepmom answered, I called out her name through tears and the call immediately dropped.  I tried twice more.  It wouldn’t go through.  I moved to facebook.  I posted that there were two bombs at the marathon finish line, but Kevin and I were ok.  I asked everyone to pray.  I went to a friend’s page and asked them to call my parents and let them know I was ok.  I started going to people’s pages who I knew were running to see if they were ok.  It was an absolute whirlwind but the outpouring of support from family and friends that we received was so extensive and truthful. It was the only thing that kept me thinking I might actually live to see another day. 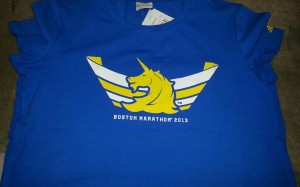 And then there was the news.  It was confirmed.  Two bombs.  2 people dead.  100 injured.  The toll would continue to rise.  The scenes were horrific.  Marathoners in their final steps to personal victory and boom, an explosion, blood, people screaming, crying … people dead.  Over and over it played, the reality of it all sinking deeper and deeper each time the clip ran.  As the hours ticked by, exhaustion set in.  We had been up since 4am.  We had run 26 miles.  I had cried for hours.  My head was pounding.  I was starving and so thirsty, yet the thought of sleeping seemed impossible and insensitive.  The race I had trained so long for and fought so hard to finish seemed like a light year ago and of very little importance.

A week later now, my thoughts are clearer.  I have been devastated, saddened, angry and inspired.  Devastated that innocent people lost their lives on Patriot’s Day, a holiday that has been marked for 117 years by a 26.2 mile race through the boisterous streets of Boston.  It is the pinnacle of the sport; a thrilling celebration for those who’ve worked so hard to earn a place on the starting line.  Saddened that runners’ biggest fans, their friends and family who support them through months of training and who travel to the finish line to see their runner’s moment of triumph, were the target.  Angry that running, such a pure sport, MY sport, was attacked so maliciously, so insensibly, so disgustingly.  And inspired.  Inspired by everyone in this country.  Inspired by runners and non-runners alike, people who run every day or 3 days a week, people who have run marathons or people who haven’t.   Inspired by all the marathoners who bravely took their final steps down Boylston Street while the clock read 4 hours and 9 minutes, by those who stopped to help the suffering, and by those who ran well past the finish line  straight to the hospital to donate blood.  Inspired by the police, the emergency response teams and the loyal and brave Boston Athletic Association volunteers who ran toward the danger and not away from it.  Inspired by the people who drove around the city giving stranded runners a ride and opening their homes to people who had nowhere to go. 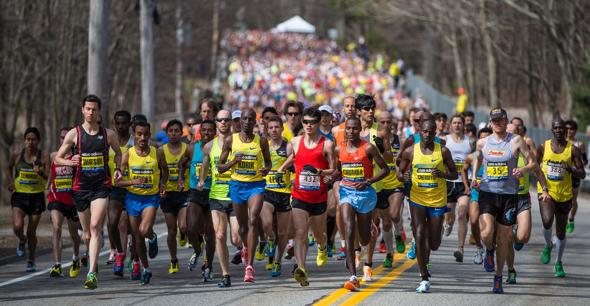 It is clear to me, and many others, that the Boston Marathon, and in a general sense, the sport of running, will be stronger because of what happened on April 15, 2013.  Runners and their supporters have made it clear that they will not be stopped and if tragedy strikes; they will pull together for the greater good. I get choked up thinking about what happened at the marathon, the aftermath, both good and bad, the victims, and the heroes.  But what chokes me up the most, is how proud I am to be a runner and to call any runner my friend. In a sport I know so well, I have found inspiration from something I never would have foreseen to have an inspiring outcome.

I will see you at the starting line of the Boston Marathon in 2014.

Michelle La Sala is an avid runner and this was her 6th Boston Marathon.  She works for the Sacramento Running Association as the Race Director of the California International Marathon.