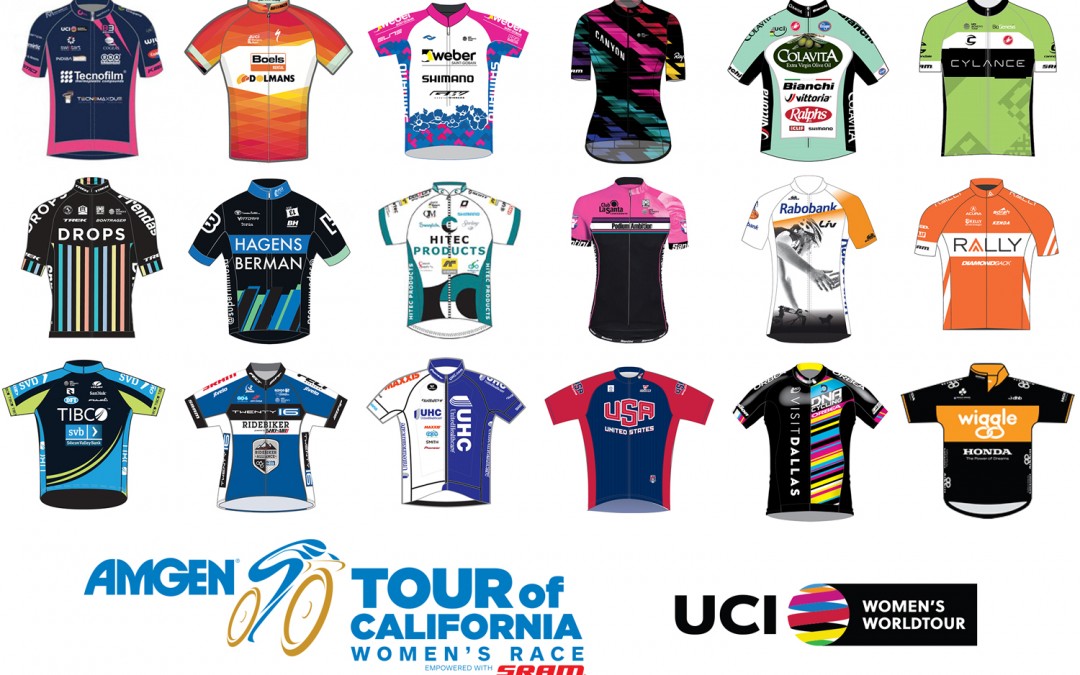 World, National and Grand Tour Champions and Olympic Hopefuls Among World-class Men’s and Women’s Pro Teams Announced for May Race

Since its inception in 2006, the Amgen Tour of California has become one of the most important races on the international cycling calendar, showcasing the most accomplished cyclists from around the world. In addition, the event provides cyclists the opportunity to preview their prospective competition leading to the Tour de France, and this year, the Summer Olympic Games.

It’s a banner year for women’s cycling with the Rio Games on the horizon and roster slots to be determined, as well as the first-ever UCI Women’s WorldTour.

The Amgen Tour of California Women’s Race empowered with SRAM will be the first North American stage race of the inaugural Women’s WorldTour. The race will be more competitive than ever, with 7 of the top-10 UCI-ranked teams in contention, including current top-ranked Wiggle High5. Among Twenty16 – Ridebiker’s roster will be Kristin Armstrong (Memphis, Tenn.), the most decorated woman cyclist in U.S. history, including six National Championship titles between time trial and road racing and two World Time Trial Championships.

“The Women’s WorldTour is coming to home soil, and I couldn’t be more excited. This amazing opportunity will showcase women’s cycling on the biggest stage in our sport! The Amgen Tour of California Women’s Race will bring the best of the best including Olympians, World Champions and National Champions representing countries from across the world – and not to mention the event lands just three months before Rio!,” said Armstrong, a two-time Olympic gold medalist in Time Trial and hopeful for the U.S. Rio team.

The peloton will be the most impressive yet with other notable riders to include Evelyn Stevens (Claremont, Calif.), winner of last year’s time trial as well as the 2013 overall title, and fellow Californian Allie Dragoo riding for Twenty16 – Ridebiker. Boels–Dolmans’ Megan Guarnier (Glen Falls, New York), reigning Road Race National Champion and bronze medalist at the 2015 Road Race World Championships, will make things exciting for the peloton.

The full list of confirmed teams for the 2016 Amgen Tour of California Women’s Race empowered with SRAM includes:

“The organizers of the Amgen Tour of California work extremely hard to get a top-level field. The combination of the men’s and women’s races will create a wonderful experience for the spectators while increasing the exposure for the women’s teams,” said Danny Stam, Director Sportif for Boels-Dolmans, the 2nd ranked team in the world after last season. “Boels-Dolmans is planning on bringing a strong team including two top American riders – we will aim high and give the best performance we have.”

Voxwomen, the online women’s cycling channel, will return to California to cover the women’s event, providing the best of the race and behind-the-scenes action to give fans and followers insight into the women’s professional peloton. Video coverage will be available at www.voxwomen.com and www.amgentourofcalifornia.com for the duration of the race, as well as live updates throughout the week on Voxwomen social media channels.

“Over the past decade, we’ve built the gold standard for cycling in America and one of the most respected races in the world for both men and women,” said Kristin Klein, president of the Amgen Tour of California and executive vice president of AEG Sports. “One of the reasons the Amgen Tour of California has become prominent around the world is due to attracting premier teams and the best riders to California every year. For 2016, fans will have the opportunity to cheer for cyclists preparing for the upcoming Tour de France as well as many competitors who will represent their countries this summer in Rio.”

Every spring cycling enthusiasts around the world look forward to the Amgen Tour of California. On April 24, everyone has the chance to ride the Queen Stage with cycling legend Jens Voigt. The route takes riders on a journey from Thousand Oaks to the new Gibraltar Road summit in Santa Barbara. Over 106 miles, riders will experience challenging terrain and beautiful ocean views. Register today: http://www.amgentourofcalifornia.com/letapecalifornia

Or, experience the race as a VIP through exclusive behind-the-scenes experiences and access into an all-inclusive hospitality tent, featuring a premium location, full food & beverage, and lounge-style seating. To purchase VIP Experiences and Passes or for more information, visit: amgentourofcalifornia.com/vip.

Interested in exhibitor opportunities for your brand within our daily Finish Line Festival Expo? Visit amgentourofcalifornia.com/festival for additional information.

About the Amgen Tour of California

The Amgen Tour of California is a Tour de France-style cycling road race created and presented by AEG that challenges the world’s top professional cycling teams to compete along a demanding course that traverses hundreds of miles of California’s iconic highways, byways and coastlines each spring. The teams chosen to participate have included Olympic medalists, Tour de France contenders and World Champions. Amgen Tour of California is listed on the international professional cycling calendar (2 HC, meaning “beyond category”), awarding important, world-ranking points to the top finishers. More information is available at amgentourofcalifornia.com.

Amgen is committed to unlocking the potential of biology for patients suffering from serious illnesses by discovering, developing, manufacturing and delivering innovative human therapeutics. This approach begins by using tools like advanced human genetics to unravel the complexities of disease and understand the fundamentals of human biology.

Amgen focuses on areas of high unmet medical need and leverages its biologics manufacturing expertise to strive for solutions that improve health outcomes and dramatically improve people’s lives. A biotechnology pioneer since 1980, Amgen has grown to be one of the world’s leading independent biotechnology companies, has reached millions of patients around the world and is developing a pipeline of medicines with breakaway potential.